As a young boy, J.J. attended Rural School District 25 through the 5th grade. He attended St. Stephen’s Catholic School through the 8th grade and graduated from Exeter Public School with the class of 1955. After graduation, he worked for Fillmore County, driving a motor grader in the Exeter area. On November 14, 1959, J.J. and Judy McCabe, daughter of Elmer & Carolyn (Link) McCabe, were married. They were blessed with five children, 13 grandchildren, and 3 great-grandchildren.

J.J. and Judy started farming in 1962, and in 1978, they received the Ak-Sar-Ben Pioneer Farm Award for continued family farm ownership for over 100 years. J.J. also sold Farmer’s Mutual Hail Insurance of Iowa, from an agency that his grandfather, John James Dinneen, started in 1934. He was a member of St. Stephen’s Catholic Church where he proudly served for seventeen years as a Trustee. J.J. also enjoyed being a 4-H leader for the Handy Hands 4-H Club for numerous years and was a member of the Turtle Club.

J.J. and Judy took great pride in traveling to every town, incorporated and un- incorporated, in the state of Nebraska. They created a scrapbook of their travels and even presented information about their travels to various clubs. J.J. was an avid collector of many different things. His greatest joy was spending time with family and friends.
J.J. was preceded in death by his parents.

A Funeral Mass for J.J. was held on Thursday, May 31, 2018 at 10:30 a.m. at St. Stephen’s Catholic Church in Exeter, Nebraska. Father Steve Thomlison was the Celebrant. Agnes Anderson was the organist accompanying Cantor Greg Rehm in “Amazing Grace,” “How Great Thou Art” “One Bread, One Body,” and “Alleluia! Alleluia! Let The Holy Anthem Rise.” Lizzie Dinneen also sang “Ave Maria” a cappella. 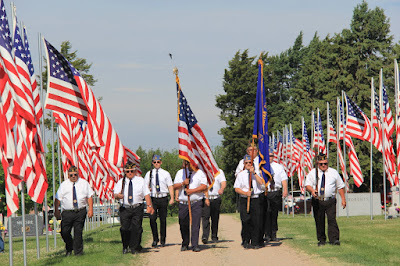 After the flag ceremony Legion Commander Alan Songster welcomed the audience and reminded them of their purpose there, “to honor those we remember.”

The Exeter-Milligan band played “The Star Spangled Banner” before Pastor Kim Dunker led the invocation.
Patrick Murphy read “The Gettysburg Address” before the band performed a “Salute to Freedom” which included “America the Beautiful,” “You’re a Grand Old Flag” and “America.”

Songster introduced Tim Wilbeck the speaker for the service.  Wilbeck noted that this year America is honoring the 150th Memorial Day formerly known as Decoration Day.

“Any American would feel honored to speak about America’s sons and daughters. . .to pay special tribute to those who made the ultimate sacrifice and to those who returned home and since passed on,” explained Wilbeck, “Sacrifice is meaningless without remembrance.”

Wilbeck shared the story of the heroics of aviator Frank Luke during World War I.  Pursued by eight enemy planes, Luke shot down three enemy ammunition balloons before he was shot down in France.  After crashing, he pulled his automatic pistol and defended to the death.  He was the first pilot to receive the medal of honor.

He also shared the story of very quiet heroism, that of Vietnam nurse Sharon Lane, a 26 year old volunteer from Ohio.  “She received no medals or fame… she wrote in a letter home that hardly anyone is sacred.  It’s just part of the job.”

An enemy rocket took her life and that of a 12 year old Vietnamese girl.  Lane was the only female nurse killed by enemy fire in Vietnam.

Wilbeck noted that these and so many others were “wedded to the principle that America is worth dying for.”

He closed with the story of four young Marines who recently lost their lives in California.  Some had already done foreign tours and never expected to lose their life in a training exercise.

Wilbeck reminded the crowd that “we need to give our gratitude and support to a group no one wants to join – the Gold Star family.  Let us not stop with this ceremony. . .visit those family members, look them in the eye and thank them.”

The Legion and Sons of the Legion honored those lost with a 21 gun salute.  “Taps” was played by Trever Zelenka while Mitchell Manning played “Taps Echo.” 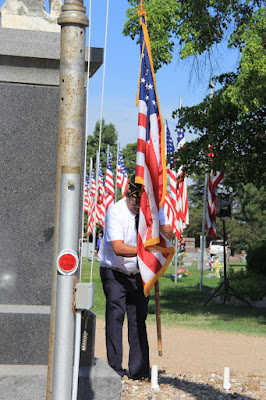 Mark Crawford posts the colors at the Memorial Day Program in Exeter. 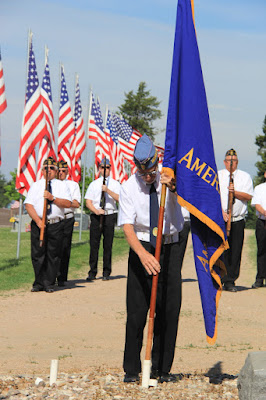 John Tauriella posts the Legion flag at the Memorial Day Program in Exeter. 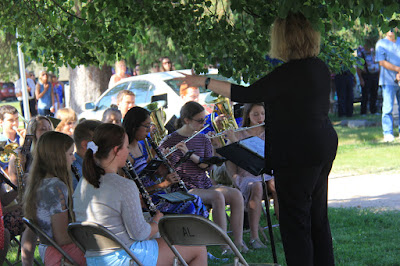 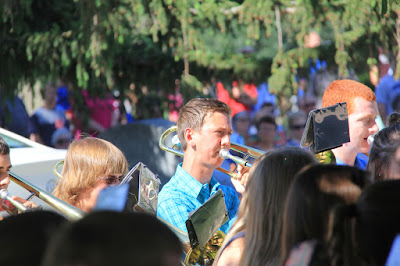 The trombone section at the Memorial Day Program. 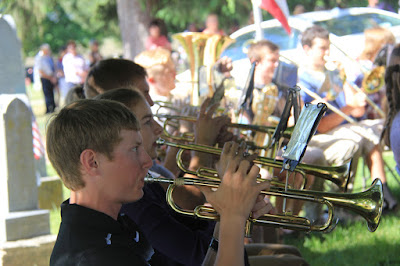 Trever Zelenka is on the end of the row of trumpets in the Exeter-Milligan band. 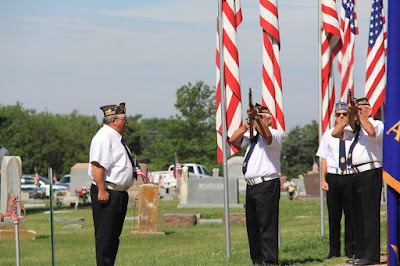 Brian Moor (far left) gives the orders to the American Legion members as they salute the dead. 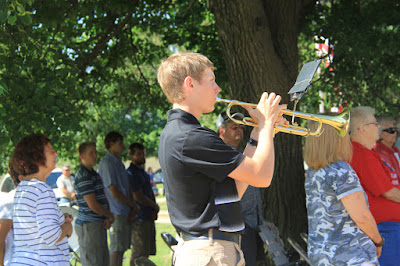 Trever Zelenka plays Taps to close the Exeter American Legion Memorial Day Program at the Exeter Cemetery.
Posted by Leesa Bartu at 7:30 AM No comments:

Exeter-Milligan Update: Give Back Day 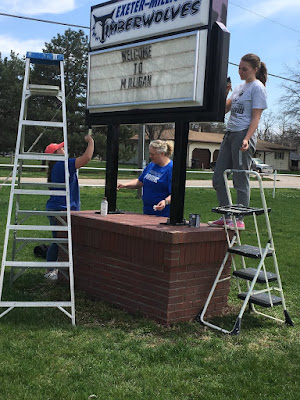 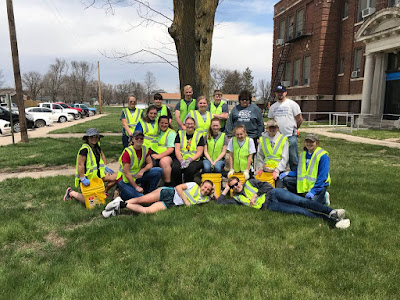 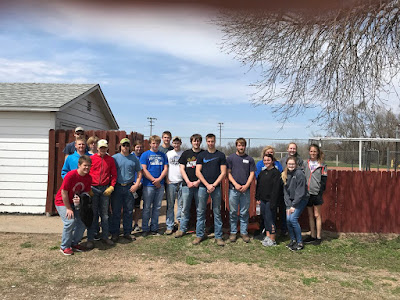 
E-M Wolves Give Back
by Paul Sheffield, Exeter-Milligan Superintendent

Thursday, April 26th was the 1st annual EMWolvesGiveBack day! Students in grades 7-12 as well as the teachers spent the afternoon, giving back to their communities.   Each teacher was assigned a group of students who were then responsible for some daunting community based service projects!

Some of the areas/projects in Exeter included:
Prepping the softball field for the upcoming summer season
Displaying/attaching the outfield signs at the softball field
Mulching around the Moor Field sign
Roadside cleanup on Highway 6 (2 miles east and west of Exeter)
Roadside cleanup on Road 21 (2 miles north and south of Exeter)
Swimming pool park cleanup

Close to 100 students and teachers participated in the project, amassing over 200 community service hours.  By working together, the group accomplished more in one afternoon than it would take an individual to do in over a month! Plans are already being made for next years’ EMWolvesGiveBack day.

Other information/point to ponder about the day include:
39 bags (55 gallon sized bags) of trash were collected
Almost 20 acres of park/play ground was cleaned
Almost 10 miles of roadside was cleaned

A big thank you goes to the students and teachers at Exeter-Milligan for their hard work, giving back to the communities of Exeter and Milligan.  Action shots and other pictures are available on the school website at www.emwolves.org or via twitter – just follow #EMWolvesGiveBack.

A Funeral Mass for J.J. will be held on Thursday, May 31, 2018 at 10:30 a.m. at St. Stephen's Catholic Church in Exeter, Nebraska. Father Steve Thomlison will be the Celebrant.

Graveside Services will be held at the Exeter Cemetery following the Funeral Mass.

A Rosary will be prayed on Wednesday, May 30, 2018 at 7:00 p.m. at St. Stephen's Catholic Church. Father Steve Thomlison will lead the Rosary.

Memorials are suggested to the St. Stephen's Catholic Church, Exeter Fire & Rescue, and York Adopt-A-Pet.
Posted by Leesa Bartu at 7:30 AM No comments: 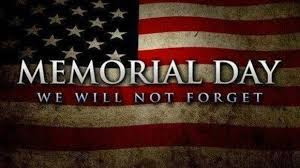