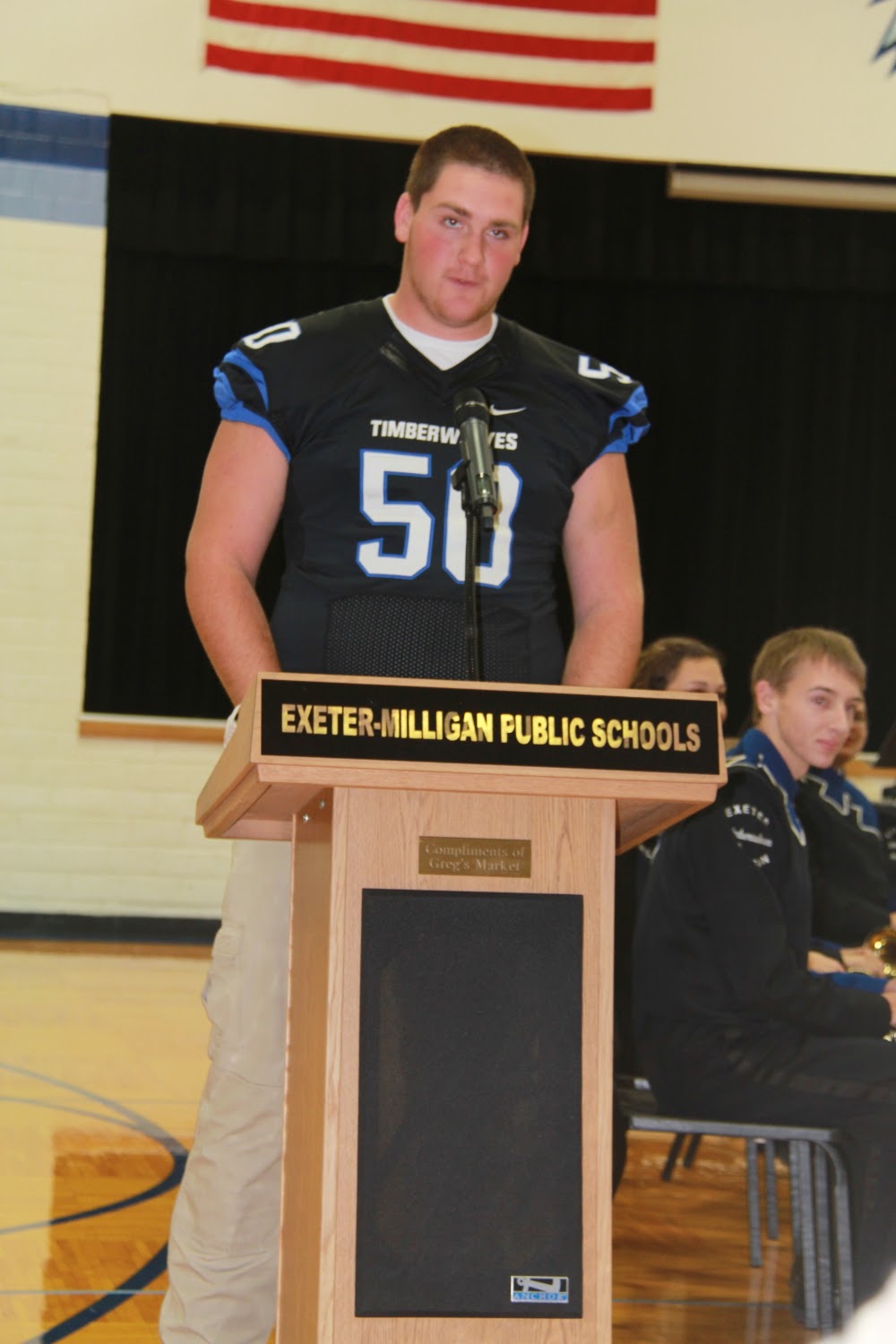 Senior Broc Mueller welcomed the crowd to the Exeter gym for the Exeter Veteran’s Day program. 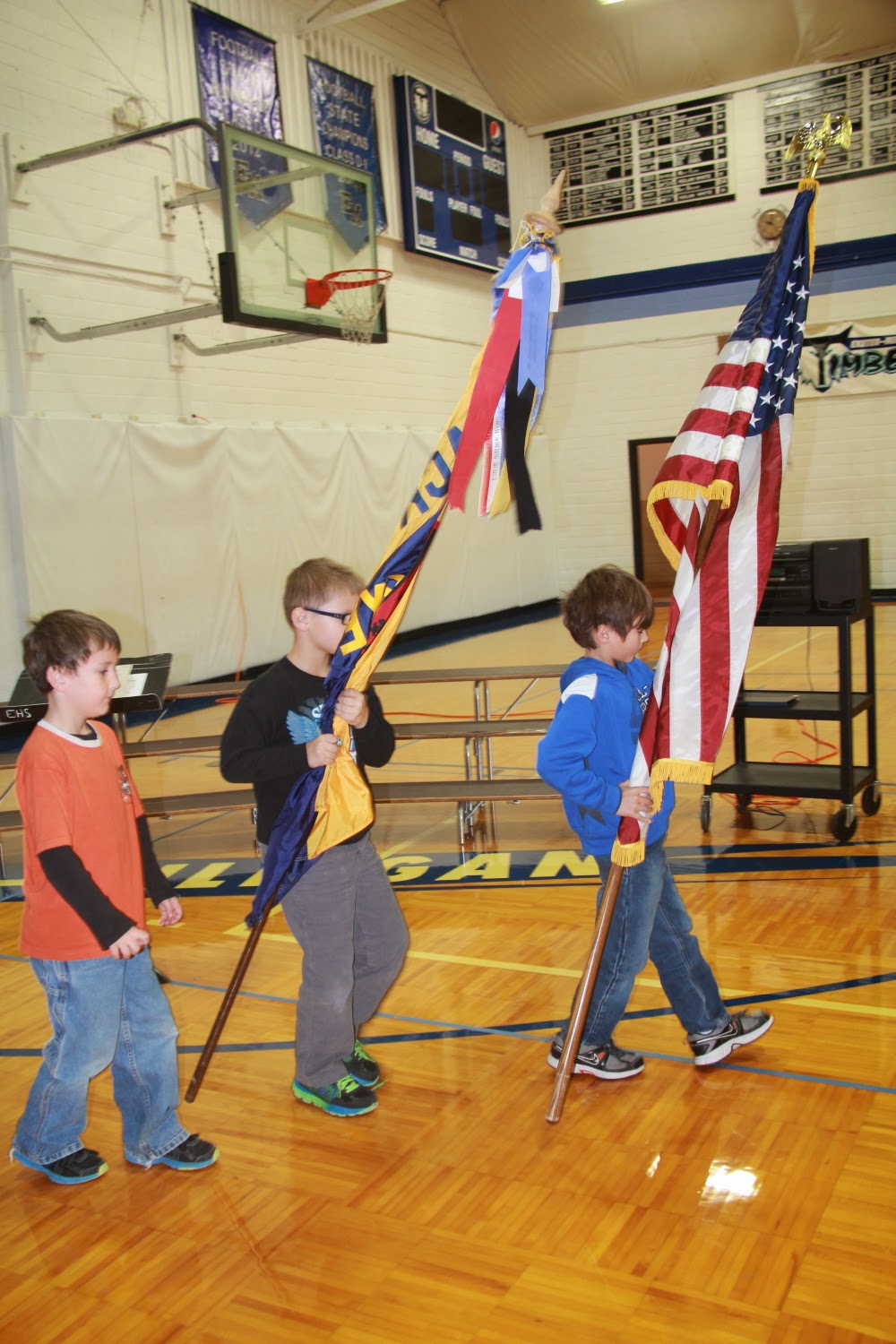 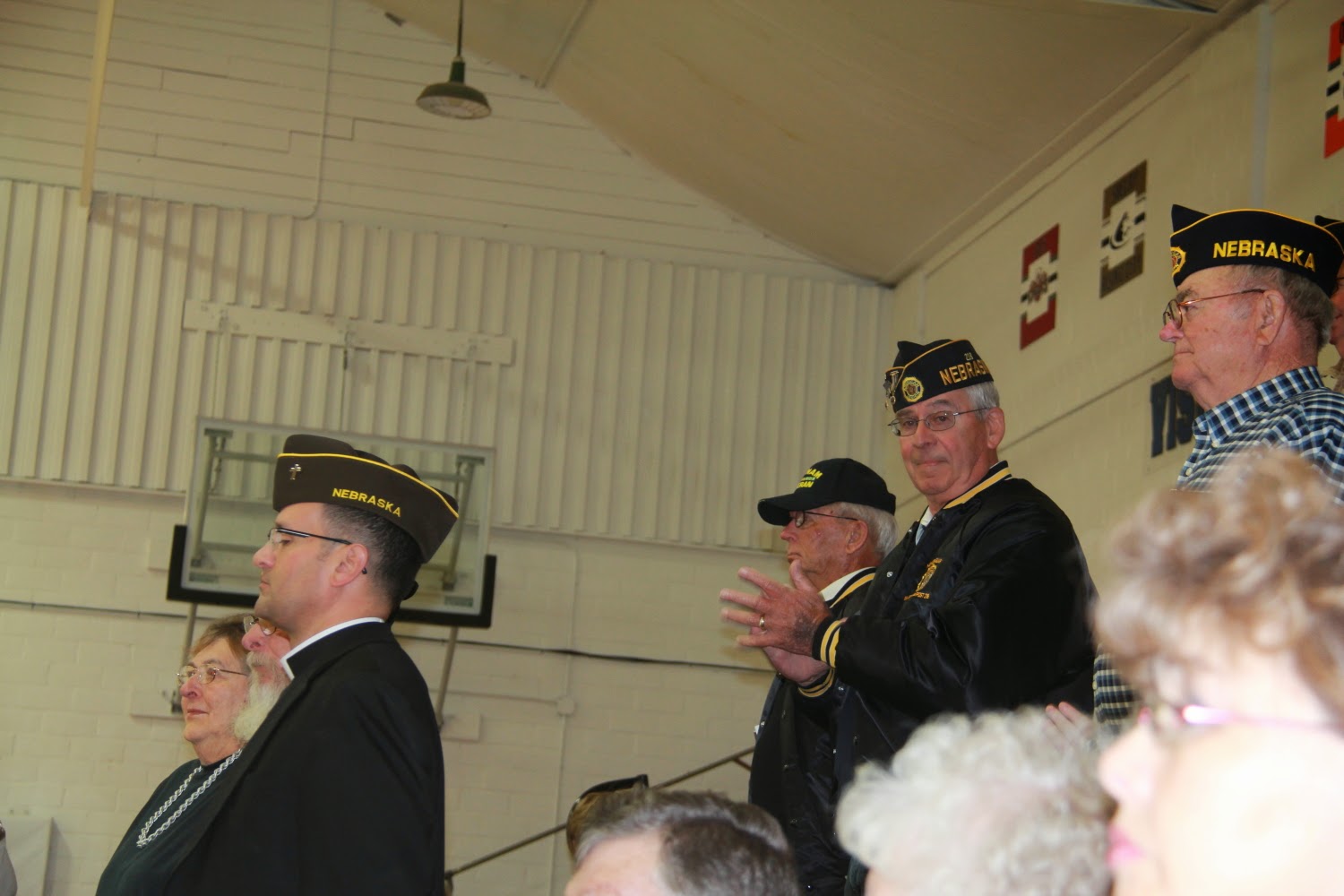 While the Exeter-Milligan Band played “Salute to America’s Finest,” they invited members of audience who had served under each branch of the military to stand when their anthem was played. 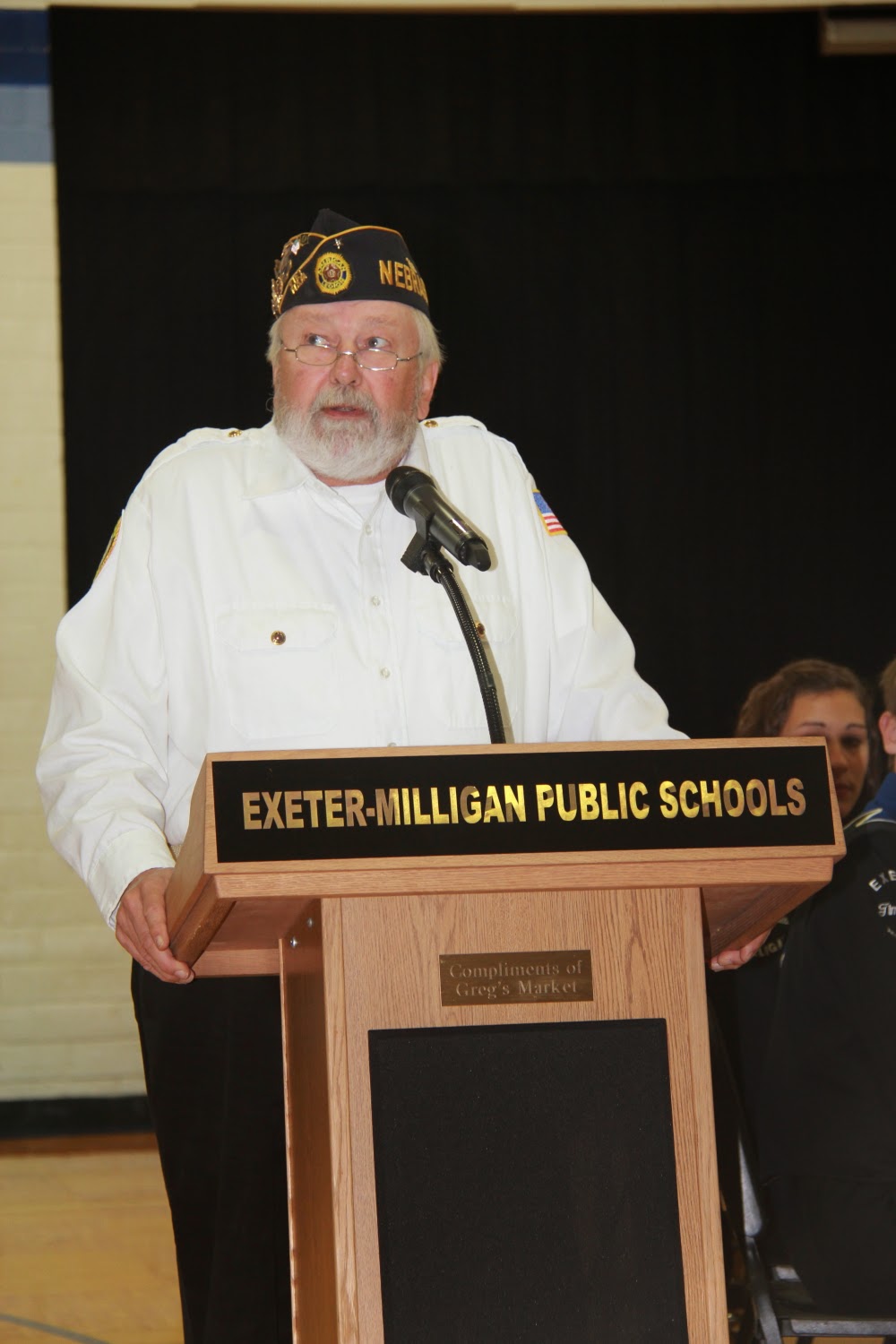 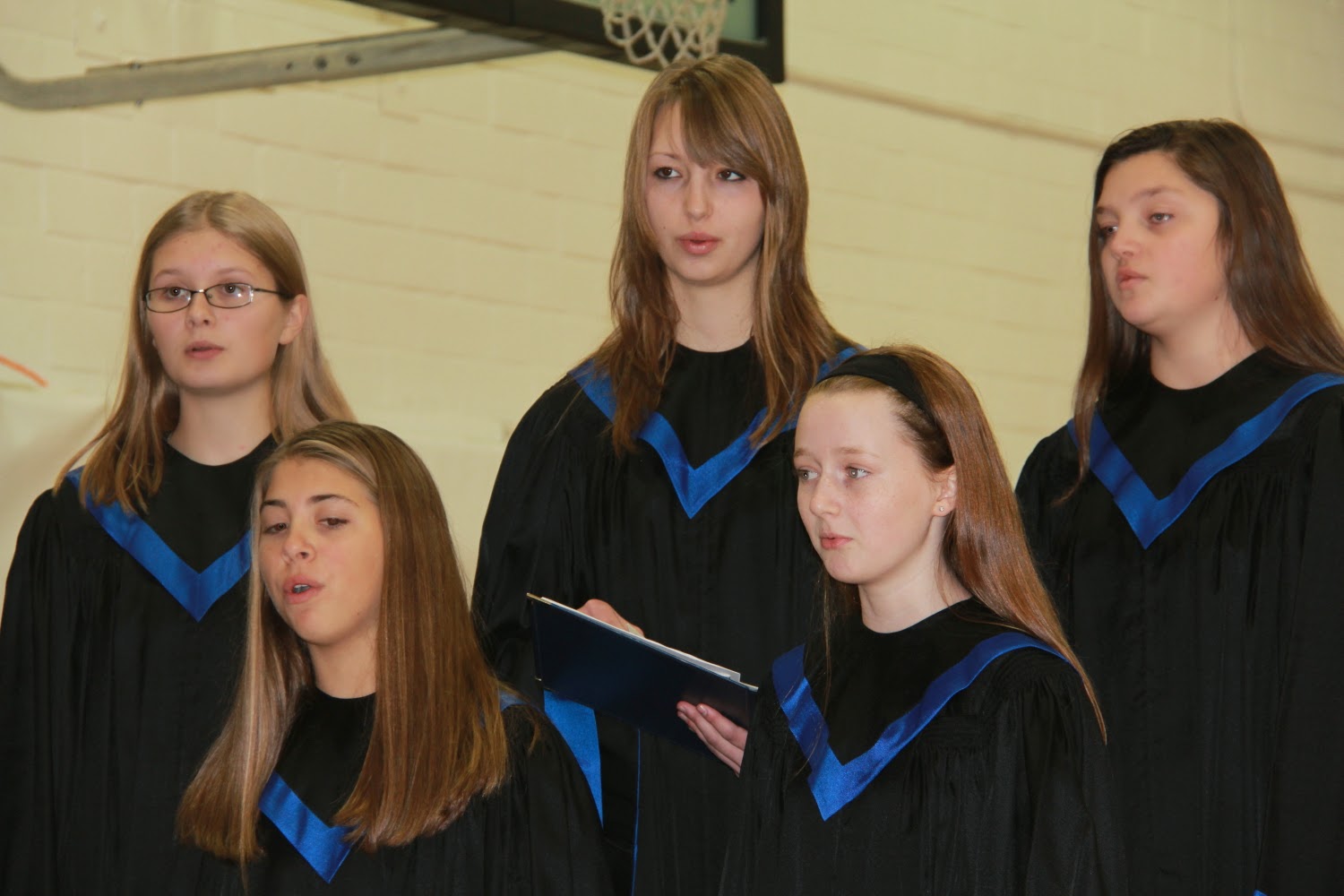 Exeter-Milligan Senior High Choir and Friends of Vocal performed “Brother, My Brother,” during the Exeter Veteran’s Day program.  Pictured in the back row from the left are Ella Wilkins, Jordyn Brandt and Katie Skinner.  Front row from the left are:  Haylee Sheffield and Caitlin Murphy.

Wilbeck spoke at the assembled crowd which included Exeter-Milligan students along with many community members.

The crowd was welcomed by Senior Broc Mueller and followed by the Exeter Cub Scouts who presented the colors and led the Pledge of Allegiance.  The Exeter-Milligan band then played the Star Spangled Banner and the theme from “Schindler’s List.”

The band performed a section of each of the military branches anthem’s inviting veterans to stand as they heard their music play.

Wilbeck spoke of the aging of the veterans and the importance of caring for them.  He noted that the median age of our veterans right now is 64, “Every day 500 World War II veterans die.”

“Our debt to the heroes can never be repaid.  Our gratitude and respect must last forever.  Warriors need advocates and that’s why organizations such as the American Legion and the VFW exist, to help each other support each other.  More importantly our country needs our veterans.”

Wilbeck noted the failings of the veteran’s care, “Veteran’s don’t ask much – these benefits are a drop in the bucket compared to what they have paid. . .We can do better and we must do better.”

In closing Wilbeck told the crowd about President Eisenhower who was prouder of his military service than he was of his election as President of the United States, “We must remember our veterans and appreciate them.”