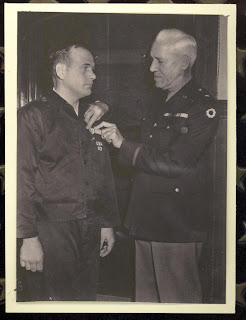 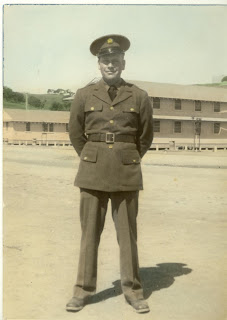 Jim Geiger recounted what families hear all the time, ”I don’t want to talk about it.”  His father, Raymond Geiger, never shared his experiences during World War II with him.

It was the war that took the sight in his father’s eye. Raymond did, however, share some of his war stories with his brothers who retold the stories to Jim.

After Raymond died in 1982 in a car accident Jim and his wife Carolyn found many of his father’s papers, medals and photos from his time during the war. Jim and Carolyn’s daughter put together several beautiful shadow boxes with the items they found. He learned how much his father had been through and the newspaper clippings gave him a glimpse into the hero he knew his dad really was.

When Jim heard about the veteran’s scrapbook project the Exeter American Legion was working on he knew that he wanted his dad’s story as a part of the book.  It was a story of heroism and bravery that needed to be preserved. Raymond Wendell Geiger had no idea what waited for him on the other side of the world when he enlisted in the Army in March of 1942.

He was assigned to the 161st Infantry as a machine gunner and served in the Guadalcanal and the Asiatic-Pacific Theater.

During his time in the Guadalcanal, Private Geiger and two other members of his machine gun crew stood their ground and stopped the Japanese in their tracks as they shut off a Japanese supply line.
A furious Japanese assault was under way and the three men not only maintained a river and trail block starting on January 19, 1943 but at times they were outnumbered more than 20 to one.
During the standoff they used their guns and grenades to prevent the enemy from evacuating their wounded and kept them from supplying their troops.

As the three men were fighting on the enemy trail, one of Geiger's companions was seriously wounded. Holding their own wasn't possible for long and shortly afterward, Geiger was also wounded.
“The stand made at the point of the enemy attack was an inspiration to the new troops and aided greatly in their reorganization, and the ultimate frustration of the enemy attack,” reads the official report.

Finally overrun after an extended battle of over a week, Geiger took action to save his own life. Being seriously wounded with no medics to transport him to safety he pulled two dead American soldiers over his body as the Japanese always bayonetted anyone who looked alive.  Since he was protected from discovery by the enemy it was several days before Geiger was found and received medical attention from U.S. troops.

Geiger was wounded in the eye and despite medical attention lost his vision in that eye.  He was awarded the silver star for his gallantry in action.  While recovering at O’Reilly General Hospital in Springfield, Missouri he was decorated with the Purple Heart. Geiger was the first man from Exeter wounded in action during World War II.

Geiger was honorably discharged September 17, 1943 and returned home to Exeter married Miss Magdalene Hassler in February of 1944 and continue farming until he died in car accident in 1982. His story and the tale of his bravery are now documented.