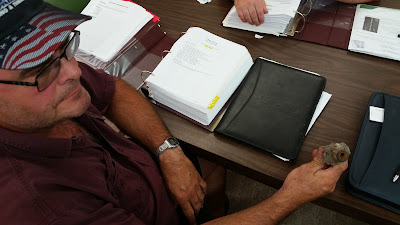 The Exeter Village Board met on Tuesday July 10th and quickly reviewed the minutes and the invoices without making any additions or corrections.

The board started their agenda with two change orders related to the current construction projects.  One, for Werner Construction, included the materials for the access road the added on the east side of town while East Boundary Avenue is closed. The total was $7900.

The change order also included the Union Avenue project, explained Chairman Alan Michl, “the subbase was not good at one intersection and they had to put a stabilizing mesh underneath on several spots.”

The second change order was for Van Kirk construction in order to extend their completion date to September 10th.  Clerk Becky Erdkamp explained that it was a date change with no cost and the board approved both of the change orders.

Clerk Erdkamp informed the board that she had included in their packets a summary of the funds used so far on the construction projects.

Fillmore County Emergency Manager Jim Dunker was next on the agenda and presented the county FEMA emergency plan and the five year update of the Local Emergency Operations Plan (LEOP). He noted that the Hazardous Material information was taken out of the notebook, “Other than that it was same as we had before.”

He added, “If we have a major disaster and we separate all of our debris FEMA will give us an extra two percent.”

The board accepted both the LEOP and the FEMA plan under Resolution 1805.

The board then approved Resolution 1802 and 1803, water liens with one customer $650 in arrears.
Next on the agenda was the upcoming Exeter Days.  The board discussed the Parade route and car show street closing with the construction going on in town.  Board member Mitch Schlegelmilch explained “it will start at the school and turn at Tecumseh and the go to Main Street.”

The Board approved shutting down parts of Seneca Street for the car show.

Michl gave a brief update on the progress of the construction projects, “So far so good with change orders.”

One downtown business owner approached Board Member Schlegelmilch about separating their water connection from the neighboring business which is located in their basement. The business owner wanted to see if the service could be separated and routed into each business.

Village Maintenance Supervisor John Mueller noted that it could not be done because of the uncertainty of what they will encounter when drilling underneath.  The board held a lengthy discussion on liability issues and risks associated with this situation.

Michl wrapped up the discussion, “It’s an unknown.  If you knew how thick the wall was (to drill through) but the more I listen to the discussion, the more I think we should just leave it alone.”
Several zoning issues were next on the agenda.  One issue was a barn at 511 Empire  barn  that was over height and a permit was denied by the planning commission.  The other, at 203 N E Boundary was a construction trailer that was moved into an empty lot.

Zoning Supervisor Jennifer Slezak has been in contact with both parties with the barn owners confirming they will cut the height of the barn down to comply with regulations but asked for leniency until the end of the year.  Board member Justin Harre commented, “What’s another six months?  I think we should let them have until the end of the year.”

Clerk Erdkamp added that the village attorney would have to pursue any action on the issue other than sending out letters.

The county had sent notification on the construction trailer requiring it to be removed from the village in 30 days which would be a deadline of August 3.

Village Maintenance Supervisor John Mueller gave his report by showing one of the water mains that was replaced downtown.  The pipe was filled with corrosion and had very restricted flow.

Board member Tim Wilbeck noted that downtown, “the water pressure should be better.”

Michl noted the added benefit that “The shut off’s should be in a universal location now.”

Mueller explained that there was an issue with the storm sewer on East Boundary.  The storm sewers south of the school are full of water and are plugged around the highway area.  He contacted the State of Nebraska and they will be cleaning out the ditch in the next day or two.

The board discussed mosquito spraying along with the power and phone lines coming into the library.  The power line has been relocated underground and they are waiting on the phone lines to be moved.  Mueller expects the new light posts to arrive in the next few weeks.

Michl reported that the Verizon reception issues in town should be resolved since the Exeter tower is a repeater tower from Friend and the Friend tower issues have been repaired.

Clerk Erdkamp reported that sales tax in April was $10784.00 and May Keno was $803.33 .  She is currently working on the insurance audit and will be starting the budget shortly.  She has mowing letters ready to be sent and asked the board if anymore needed to be sent.