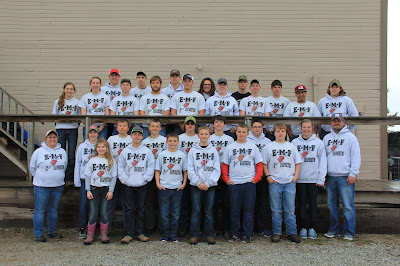 The Exeter-Milligan-Friend Trap team had another successful year.  This year, 31 students comprised the team which is divided into Juniors (age 12 through 8th grade) and Seniors (9 – 12th grade).  They competed with around 200 other shooters every Saturday morning at Crooked Creek club near Aurora.

This year the team included 13 juniors and 18 seniors.  Each Saturday the seniors would shoot 50 clays to start the day at the 16 yard line followed by the juniors who shot 50.

The participants pay no registration fees on the Exeter-Milligan-Friend team because each team member raised funds selling raffle tickets for a gun. The raffle, which replaced their annual soup supper and labor auction, was a successful venture that Coach Justin Harre plans to repeat next year.

“The kids did a great job selling tickets and the support from the community was once again amazing. The funds from that are used to pay for the kids entry fees, practice rounds, shirts & coats. We will be doing the raffle again next year instead of the labor auction.”

Harre, along with Coach Lisa Soukup keep busy observing the team and monitoring their shooting during practices and at the meets.  They spend the entire day outside no matter what the weather and with the season starting in mid-March there always seems to be snow and rain for those Saturday mornings.  This year for the first time ever a Saturday morning session was cancelled due to blizzard conditions.  The teams made up the rounds of shooting over the next two Saturday’s.

The team also participates in a statewide gun raffle.  Since the gun raffle has gone so well they were able to lower the entry fees for the conference.  Most of the raffle proceeds go toward scholarships for the club members. Exeter-Milligan-Friend team member Tara Mueller received a $500 scholarship from the Central Nebraska Trapshooting Conference this year.

The season culminated with the team participating in the 49th Annual Cornhusker National Jr/Sr High School Shoot sponsored by the Nebraska Game and Parks and held in Doniphan each year in May.  Over 2500 students participated this year. Junior Cori Combs tied for fourth place overall in the junior women’s division at the State Tournament this year.

Harre added, “We had another fun year with a great group of kids and parents, there were a few weeks where the weather was pretty bad for the kids to shoot in but they all sucked it up and went out there and did their best.  Trap shooting is an individual sport as well as a team sport so the participants learn that their team is dependent on them to be there.”