Members of the Exeter-Milligan girls basketball team sponsored a soup supper fundraiser for Coach Jackson Krejci’s mom, Dixie Krejci, who has been a para at Exeter-Milligan for the last 25 years.  Pictured serving soup are (l-r) Kate Jansky, Anna Sluka and Caitlin Murphy. 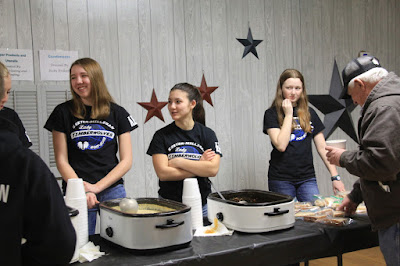 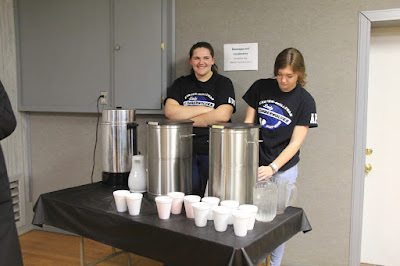 Seniors on the Exeter-Milligan basketball team, Tara Mueller (l) and Hannah Beethe, guarded the drink table at the fundraiser.


Sometimes being a team is more than just performing on a court or a field, it means that you work to the good of all of your members.  The Exeter-Milligan girls basketball team embodied that idea this year as they initiated a fundraiser on the part of their coach, Jackson Krejci’s, mom, Dixie Krejci who has cervical cancer.

The girls, asked their assistant coach, Sara Lincoln, what they could do to help.  As they brainstormed, they knew they could do a soup supper, what they didn’t know is how big the event would become.

Lincoln explained, “It was the girls’ idea so they were thrilled when I started telling them how big it was getting and how many people donated things. The girls were a huge help and did such a great job. Not only are they a great group of girls to coach but they also show their compassion and thoughtfulness outside of basketball.”

Friday, February 16 only had a boys varsity game scheduled so the event was planned for that night.  A silent auction was added and began to grow beyond Lincoln’s expectations, “I was blown away by how many donations we received not only for the auction and also for the soup supper.”

Exeter alum and former basketball player JJ Becker offered to help with the silent auction which ended up having close to 100 items to auction.  She offered to accept the donations the evening before and help get it set up at the Legion the night before while the girls were winning their sub-district game.

Even with donations of extra food and homemade desserts, the turnout was so amazing that the group ran out of food.  The silent auction ended at 6:15 and each item brought well over its value.

Bill and Dixie Krejci learned about the soup and sandwich fundraiser the girls’ basketball team planned and they were very touched, “It was very nice of the girls.  I am so very appreciative of it.”

Coach Krecji was very touched at the fundraiser, “I’m overwhelmed by the support from the Exeter and Milligan communities.”

The Krejci’s appreciate the funds and contributions and will use them moving forward as their insurance does not cover any alternative treatments.

So many helped to make the fundraiser happen along with the girls and their parents.  So many items were donated including drinks, paper goods, auction bidding cards and condiments.  The list of those who donated was lengthy.

This very special group of girls, have had this on their hearts the whole basketball season. They’ve carried it with them the whole season as they each wear a teal ribbon on their court shoes in honor of Dixie’s fight. 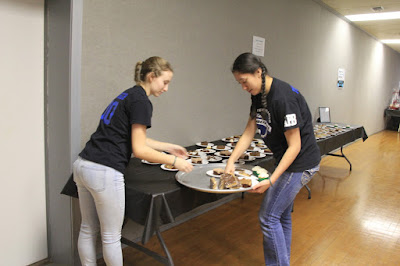 Kayla and Alexis load up the dessert table, again. 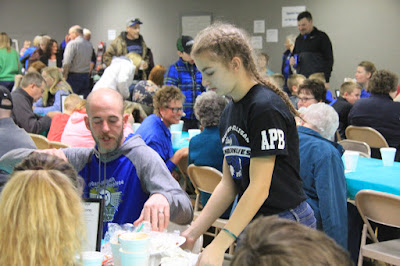 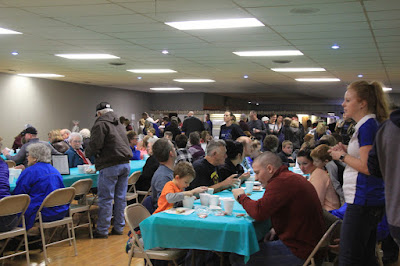 The Legion was full for the fundraiser. 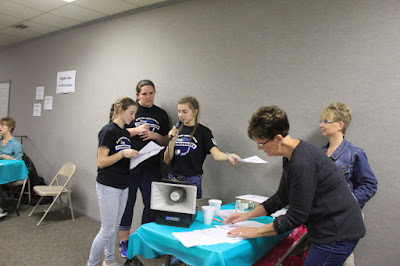 Along with the soup supper, the team held a silent auction and announced just after 6:30 the winners of the nearly 100 auction items.  Pictured from the left are Kayla Geiger, Tara Mueller, Jaiden Papik, Linda Underwood and Karla Sheffield.