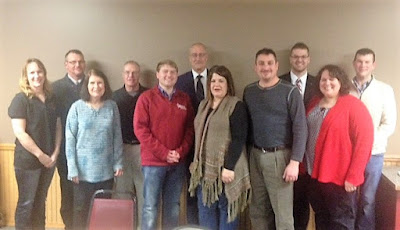 The FCDC then presented the first “Fillmore County Entrepreneur of the Year” to Jaime Lopez and his family who opened Molcajete Mexican Restaurant in October of 2016.  Jan Stoldorf who worked closely with Mr. Lopez throughout the project introduced Jaime and gave a short history of the business.

The guidelines for deciding an “Entrepreneur of the Year” includes; having been in business for at least one year but not more than three, have at least one employee other than the owner(s), be open at least 5 days a week with regular hours, and provide a product or service that will be used throughout the county and beyond.

Brandy VanDeWalle, President of the FCDC, called the 2018 annual business meeting to order.  During the business meeting the minutes of the 2017 annual meeting were approved, the financial report was accepted and the proposed budget for 2018 was approved.  Cindy Myers of Ohiowa and Charlie Trauger of Exeter were elected as new Board of Directors of the FCDC to serve four year terms.

Patt Lentfer, Executive Director, also thanked the FCDC investors, Board members, committee members and the FCDC Administrative Assistant for all of their work in 2017.  There had been a lot of growth in 2017 with business expansions, business start-ups, business transfers and even a business merger.  Lentfer thinks of Fillmore County as her community and is proud of the way people band together to take advantages of opportunities that come to our way.

After the meeting adjourned, Jodi Pribyl, one of the owners of Charlie’s Pub, talked about how a group of four couples decided that Milligan needed a place like Charlie’s Pub. This group put in their time and money and opened the doors in December. The reviews have been great.