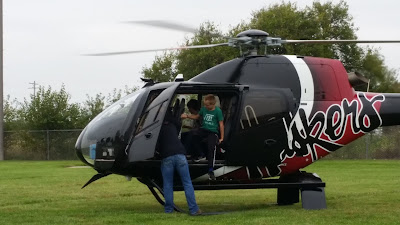 Being an altar boy for St. Stephens in Exeter or St. Wenceslaus in Milligan paid off big time on Friday afternoon when the boys were treated to a helicopter ride around Exeter.  The boys, who range in age from fourth grade through eleventh grade took turns riding in the Husker helicopter which is out of Columbus.  The generous rides provided by Husker helicopter owners Kim and Jill Wolfe were very exciting for the boys.  Father Steve Thomlison, the priest serving at both parishes, knows the Wolfe’s through his work as the Nebraska State Patrol Chaplain and the FBI Chaplain.  “I was out east for a meeting with Kim for a meeting with Director Comey (earlier this year) and mentioned I wanted to do something special for the boys and Kim was very generous to do this.”
Several other church members were able to experience a helicopter ride as they took off and landed from the Exeter site football field. 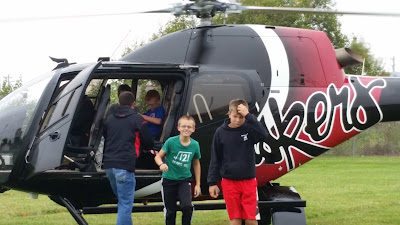 The boys were all smiles as they got out of the Husker helicopter.  Still in the helicopter is Brett Kallhoff with his brother Troy Kallhoff in the middle and Marcus Krupicka on the right. 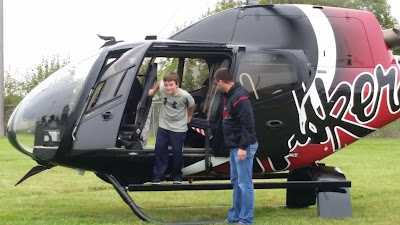 Jonah Geiger loved his ride on the Husker helicopter and it shows on his face.
Posted by Leesa Bartu at 7:30 AM