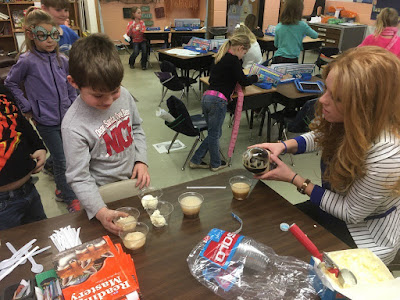 Below: Kalvin Lock presents about his favorite president to the class at the Senior Center in Exeter 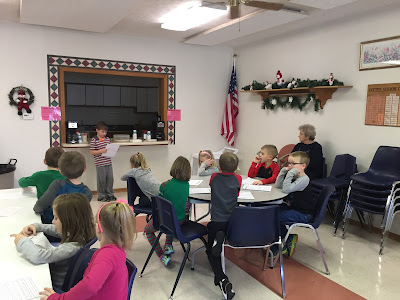 The First Graders have been hard at work this semester, from learning about the states of matter, solutions and mixtures to researching a President in honor of President's Day.  The first graders were able to learn about the three states of matter: solid, liquid, and gas.  They spent several days finding each state of matter around the classroom and school, along with separating them through an interactive game on the Smartboard.  To celebrate the end of the states of matter chapter along with the 100th day of school, the students were able to create a science experiment using root beer and ice cream. In order to eat the root beer float they had to list the three states of matter they saw.  Each student had worked so hard during this chapter they were all able to enjoy the treat.  To celebrate President's Day the students were able to pick a president and write a short biography on him.  They had to research, write a rough draft, edit, and write a final copy that went a long with a picture they colored.  They then were able to present this in front of the class.  Each one of them did an outstanding job on their biographies. The First Graders are currently learning about solutions and mixtures and will be creating an experiment next week.