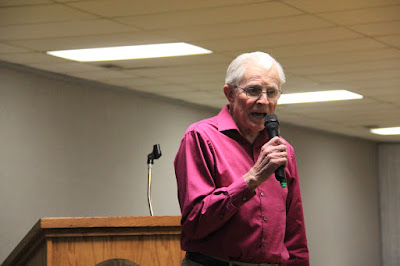 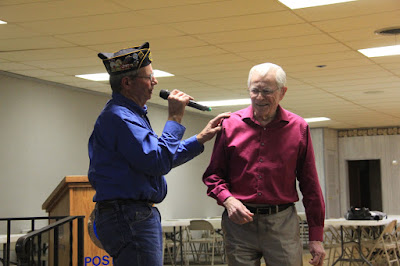 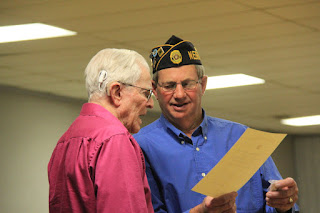 The Exeter American Legion held their annual Legion Birthday party on Monday, March 13.  The Exeter Legion Post was originally chartered in 1926 and the current legion building was purchased in 1954.

“The C-47 was a flying truck.  It held everything for the ground troops.  There were many places we delivered the necessities of life,” explained Stubbendick.

Stubbendick flew supplies on the India-Burma-China route for a little over a year before the war was over.  Often there were no landing strips or airports, “You must missed the trees and pushed things out the door.”

“Sometimes it was a little more than exciting because you never knew who was out there.”

Stubbendick, who will turn 96 next month recalled flying over Egypt and seeing the pyramids and also flying over the Amazon river “which seems like we flew over for half a day.”

In India, the men in his unit stayed four to a tent.  Stubbendick recalled waking up in the night and hearing something moving in the tent.  As he pulled his .45 out from under his pillow to be ready to shoot the intruder he realized it was a cow.  Thankfully, he didn’t pull the trigger as cows are sacred in India.

After spending so many hours flying, he was instructed to park his plane on a mountain in Calcutta at the end of the war, “and as far as I know they are still there.”

Riding on a boat home was a long trip to a pilot and Stubbendick remembers vividly their arrival home indicated by passing under the Golden Gate bridge, “That was a thrill.”

Stubbendick worked and resided in Exeter nearly 50 years before his retirement.