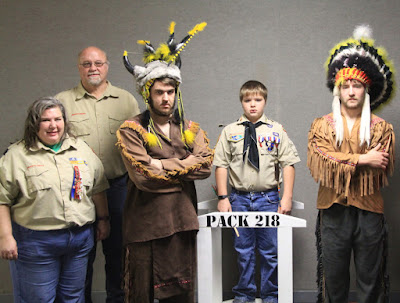 Mikey Bartu, middle, was surrounded by his parents Dean and Leesa Bartu, and members of the Order of the Arrow who conducted his crossover ceremony into Boy Scouts.  Far right is Akela (Joey Bartu) and Medicine Man (Ross Novotny).

The Exeter Cub Scout Pack 218 celebrated their Blue and Gold on Sunday, March 5 at the Exeter Legion.

The scouts had been busy in the last month making decorations to fit their Star Wars theme.  They had created floating Death stars, made lots of lightsabers out of perler beads and also made floating storm troopers.

Before the Blue and Gold banquet began Mikey Bartu was recognized in a crossover ceremony by the Order of the Arrow. The Medicine Man (Ross Novotny) and Akela (Joey Bartu) examined Mikey’s achievements and declared him worthy of joining Boy Scouts.  Mikey cross the bridge and was received into Troop 218.

Next Leesa Bartu introduced the awarding of ranks.  Mikey Bartu received the arrow of light and also completed all 28 of the activity pins at the Webelos rank. Katie Babula awarded Johnny Babula the bear rank and Michelle Schauer and Becky Erdkamp awarded Deacon Erdkamp and Richard Hickman the ranks of Bobcat and Tiger.

The group shared a meal together with their guests and then heard a presentation on Friends of Scout from Georgia Schropfer of Fairmont.

The scouts were excited to get to the Pinewood Derby.  The track was brought by York Troop 173 Scoutmaster Chris Teitmeyer and his wife Angie and the judging and the race order were led by Lance Larsen of Cordova.

After the scouts raced they had invited any of the boys in the area who were interested in scouting to come and race a hot wheels car of their choice down the track at the end of the evening. 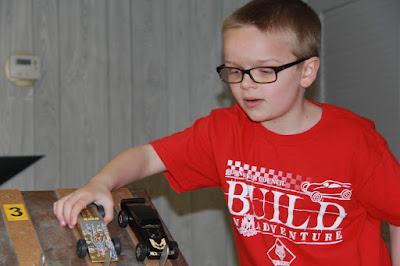 Deacon Erdkamp places his car in just the right spot on the Pinewood Derby track. 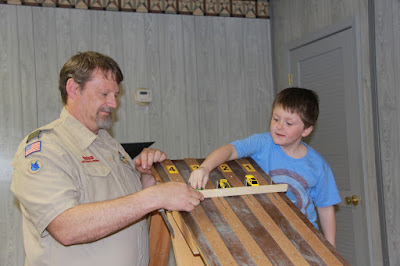 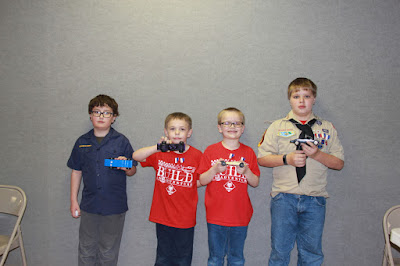 The Exeter Cub Scout Pack 218 members show off their cars and their medals.  From the left are Ronnie Babula, Richard Hickman, Deacon Erdkamp and Mikey Bartu. 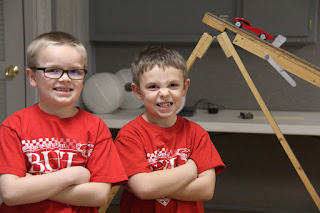 Tiger Cubs Deacon Erdkamp (left) and Richard Hickman are all ready to race their cars at Pack 218’s Pinewood Derby.
Posted by Leesa Bartu at 7:30 AM