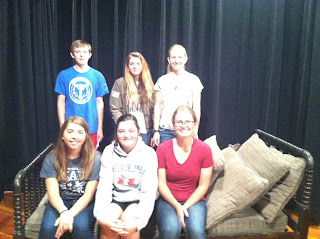 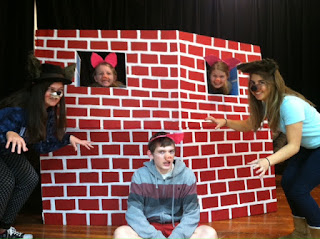 Exeter-Milligan one-act members are working on the play “The True Stories Of The So-Called Big Bad Wolves” by Richard Gremel. The stories of Little Red Riding Hood, The Boy Who Cried Wolf, and The Three Little Pigs are twisted around in this one-act comedy when the wolves are tired of being accused of being “big and bad” all the time.  They have gone on strike until they can tell their side of the stories to the people.  The main characters decide to allow the wolves to share their side, but only this one time.
The cast of characters include Katie Skinner as Jack Wolfe, P.I.; Haylee Sheffield as Harriet Howl; Katie Moody as B.B. Wolfington; Ella Wilkins as Red Riding Hood/Mother/Penelope; Samantha Horne as Granny/Father/Pinky; and Nick Hayek as The Woodsman/Timmy/Hammy.  Cast and crew members have been working hard to develop the set and characters for this funny, entertaining twist of the children’s stories.
Please join the one-act cast and crew and FCCLA members for a dessert luncheon at Exeter-Milligan Public Schools at the Exeter site, in the gym area on Sunday, Nov. 6, 2016 at 2:00 P.M. They will be performing the play to prepare for competition.  A huge thank you to Mrs. Vossler and the FCCLA for providing the delicious refreshments.  Thank you to the lighting and sound crew including James Becker and Patrick Murphy.  The crew members of Quinton Behrens, Kayla Bonds, and Katie Moody have created a creative set for the play with the help and direction of art teacher Mrs. Lisa Kanode.  They have done an amazing job with the set.  Other crew and makeup members include Tara Mueller, Destiney Fairbank, Alexis Uldrich, Claire Mounce, Sean Gibson, Ashley Benorden, Katherine White, and Katie Mounce.   Mrs. Barnhart is the one-act director.  Thank you to all of the community members who have brought in items to aid in the development of the stage and costumes.
The one-act play conference competition is scheduled to perform on Wednesday, November 16th at Shickley Public School.  Exeter-Milligan will perform second for the one-act plays.   The final performance will be at the district competition on Wednesday, November 30th held at Meridian Public School.  Exeter-Milligan will perform in the middle of the day for districts.  Please come to support the students in their performances for the one-act play.