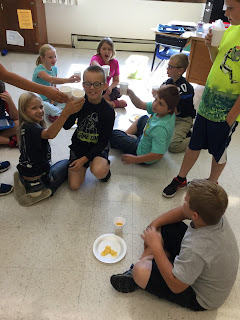 Ms. Brooke Neville’s 5th grade class at Exeter-Milligan recently started a Social Studies unit about the original 13 Colonies. The class chose colonial style names to go by during each lesson.  A few students' names were Cotton, Obadiah, and Susanna.  At the end of the unit they made Johnny Cakes, a cornmeal-based pancake, and drank Apple Cider.
Posted by Leesa Bartu at 9:42 PM