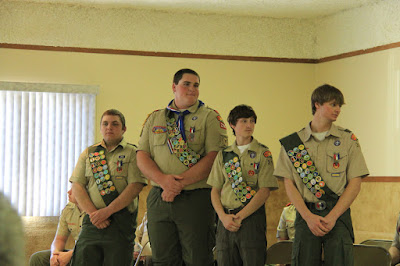 After years of hard work, lots of camping and outdoor activities, Kirby Soukup, Elliot Erdkamp, Jack Dinneen and Broc Mueller completed the Eagle Scout rank and all of the required projects, paperwork and a board of review.

To receive the rank of Eagle Scout the young men must complete 21 merit badges and achieve seven different ranks, along with their requirements.  Their final tasks is to complete an Eagle project which provides a platform for them to learn leadership skills and put them into practice.

For his Eagle project, Mueller, along with community members and troop members landscaped an area around Trinity Lutheran Church in Cordova. Soukup, along with many hours from his troop members and leaders, made metal flower hangers to put in every yard in the village of Cordova.  Dinneen directed a crew of helpers as they re-roofed the shed at the Exeter ball shack along with the picnic shelter in Gilbert’s Park in Exeter.

Erdkamp also focused on Gilbert’s Park in Exeter.  His project involved creating a cement sidewalk area around the brick sign that was erected for the Q125 celebration.

The Court of Honor to award their ranks was held at the Cordova Community Center with Troop 359 Assistant Scoutmaster Lance Larson serving as the Master of Ceremonies.  After an opening flag ceremony led by the scouts, Troop Committee Chairman Robert Rhodes gave an invocation.

Steve Rhodes, also an Assistant Scoutmaster with Troop 359 welcomed the many family, friends and fellow scouts.

The scouts presented the twelve points of the scout law lighting candles as the laws were explained.
Matt Doloch, an Eagle Scout, originally from Iowa shared not only the story of the patches on his scout shirt, but advice and encouragement for the Eagle candidates.

Members of the York Elks along with the Sons of the American Revolution presented the scouts with special certificates and flags in recognition of their rank.

The scouts each spoke telling about their project and their experiences in scouting.  They thanked their families and their leaders.  The young men had all been members of Cub Scout Pack 218 as youth.
Before the program closed, Scoutmaster Warren Thomsen was honored for his 41 years as Scoutmaster of Troop 359 as he had notified the troop that he would be retiring when the scouts completed their Eagle rank.  Assistant Scoutmasters Rhodes and Larsen also tendered their resignation.  There were congratulations read from Cordova Mayor Travis Due, BSA Prairie Winds District Executive Tina Rockenbaugh, Robert Rhodes along with Larsen and Rhodes.

It was announced that the Cordova park and playground area would be renamed in Thomsen’s honor.

The crowd sang “God Bless America” before the scouts retired the flags.

Guests were invited to a celebratory supper with the scouts and their families. 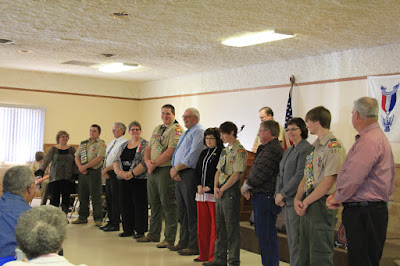 Below – Becky Erdkamp pins the Eagle Rank pin on her son Elliot Erdkamp during Troop 359’s court of honor ceremony. Troop 270 Eagle scout Broc Mueller is in the background. 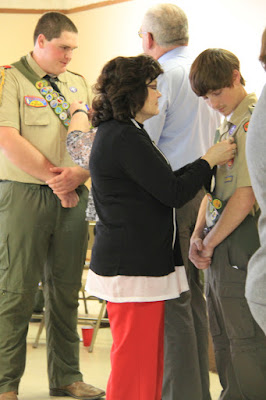