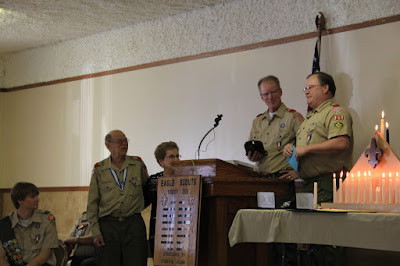 Above, at the podium Steve Rhodes, left, and Lance Larsen, right, speak about Cordova Troop 359 Scoutmaster Warren Thomsen and his wife, Lois.

At a recent court of honor recognizing four young men who earned their Eagle Rank, Cordova area resident Warren Thomsen was toasted for his 41 years of service to Cordova’s Boy Scout Troop 359.

Twenty-seven young men earned the rank of Eagle Scout while Thomsen was Scoutmaster, but countless young men learned life lessons and skills while they were members of the troop.

A scout as a young man himself, he recalled with fondness his leader Darrol Larson,  “I only got to (the rank of) first class.  I turned 16 and started seeing some girls and that ended the scout program for me.  That hasn’t changed any for boys these days.”

Over 41 years, Thomsen took countless camping trip and claims that “Every time we went camping I learned something new.  The boys would always teach me something new.  There were only a couple of times in all those years it didn’t rain, snow or just be so cold.”

He continues to see the impact of scouting on the lives of young men who were once in the troop.  He sees how they are now a part of the community wherever they land, “All the boys that went through scouts will volunteer and don’t have to be asked.  It makes their community a better place to live.”

Some of Thomsen’s favorite memories involved a 50 mile hike with the troop in the late 1970’s.  The 18 boys along with their leaders and some dads that volunteered, started hiking from Cordova and spent the first night outside of Dorchester where they were featured on the evening television news.  He also remembered it raining that night and with the wind blowing, the scouts spent the night on their troop bus which was following them.

Family involvement is one of the benefits that Thomsen has seen with scouting, “On the 50 mile hike the dads took turns hiking and driving the bus and the moms made our Sunday lunch.  We got the whole family involved.”

Scout spirit is also another advantage of the troop dynamic.  “We had one very shy boy who couldn’t get over a wall at a camporee when we were timed.  All of our boys got in there to help, some lifted, some pushed and he made it to the top of the wall.  The boys got a trophy for that, they never left him behind.”

The boys have folded a lot of flags over the years but they have also learned some great life lessons.  “We have overhauled irrigation motors, lawnmowers, laid cement blocks and poured a lot of concrete.  The more projects you get their hands on all of the sudden the more they know how to do.”

Lance Larsen, who has served as an assistant scoutmaster for 28 years with Thomsen felt that he was lucky to have Thomsen as his leader his whole life.  “When I turned 18 and earned my eagle rank Warren told me I needed to help him as an assistant so I just left my uniform on.”

“Warren has a great way with kids.  He is a heck of a teacher and he really, really relates to kids.  They may think he is a little growly and grumpy and he can’t hear but he can get things across to kids that no one else can.”

“He is always looking for a new project to improve Cordova.  There’s always something cooking in his head , he’s always thinking about what Cordova needs.”

“He is so vested in scouts it is hard to see it not continue.  We couldn’t have written a better final chapter than to have him as the scoutmaster for our entire scouting careers.”

Steve Rhodes, the other assistant scoutmaster, agreed with Larsen, “He has been an inspiration to all of us and taught a lot of boys so many life skills and daily skills, things they will carry with them the rest of their life.  I learned more from him than I ever learned in school as far as mechanical skills and welding skills.”

“He was never afraid to tackle anything from wild ideas on floats and parades to Eagle scout projects.”

Rhodes also mentioned Lois Thomsen, Warren’s wife.  “Lois has been such a big part of it.  She used to help him with the paperwork before I took it over 28 years ago.  She has spent a lot of time behind the scenes.”

The community of Cordova have honored Thomsen renaming the park to Warren Thomsen Park, where so many Eagle Scouts built projects including the rest rooms, tennis courts, playground equipment, park shelter and brick entrance.
Posted by Leesa Bartu at 7:30 AM