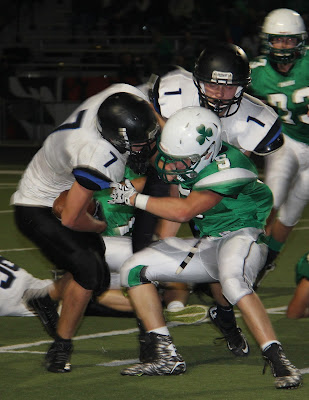 Luzum carries the ball with Colton Bossaller coming to help. 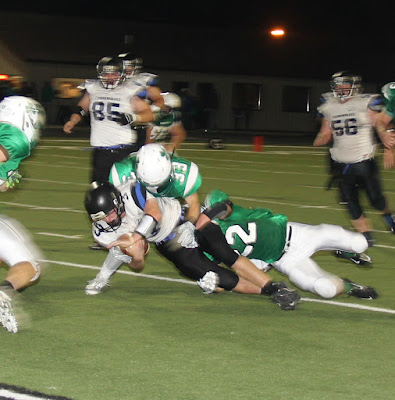 Zeleny on the carry. 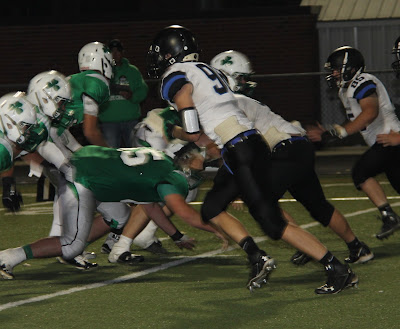 Taking off the line to get the Irish.  Below the T-wolves stop the Irish. 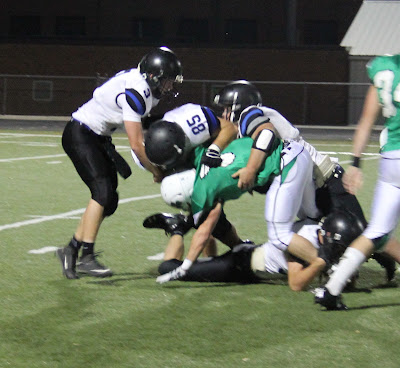 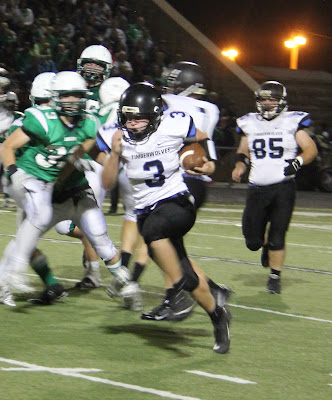 SWEEP!  And away he goes.  Zeleny escaped the Irish and headed for the goal line.

Kirby Soukup gets ready to kick off. 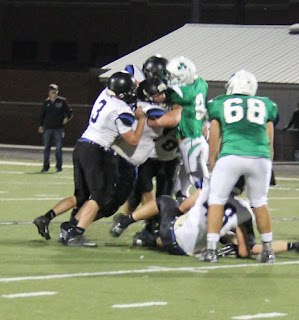 Timberwolves stop the FCSH run. In on the play and visitble are Zeleny, Mounce, Soukup, White and Soukup. 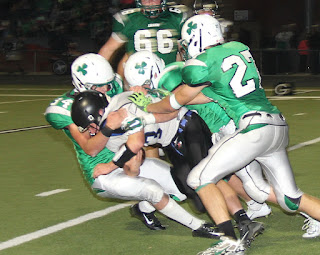 Zeleny gets stopped by FCSH.

It was a long ride home for Timberwolves Friday night in more than one way.  The 31-0 Exeter-Milligan team suffered their first loss in three seasons against a tough Falls City Sacred Heart team.
Sacred Heart was 4-1 on the season losing their opener to North Andrew High School (Rosendale, Missouri).  The Timberwolves had fought off some tough teams to bring their season to 5-0 ranked #1 in the D-2 field with FCSH just trailing in the number two spot.

The T-wolves received the kickoff and Zeleny returned the ball for 31 yards but the Twolves were unable to convert a 3rd and 5 to a first down and punted to the Irish.  The Irish put the first score up on the board with 6:32 left in the first quarter.

The Timberwolves benefited from a few Irish penalties before Zeleny recovered a Irish fumble (the ball was pitched backwards and Zeleny swooped in and carried it downfield for 6 points.  Exeter-Milligan was unable to complete the extra points.

Irish player Bailey Witt ran in for the next 8 points for the Falls City team on a four yard run for six and then the extra points.

The T-wolves were right back in it with Zeleny hitting Luzum for 15 yard pass gain and a first down. After Coach Filipi called a time out Zeleny called his own number and ran in for a touchdown passing to Luzum for the extra two.  Irish were still up 16-14.

The Irish added two more td's making the score 24-14.  The Irish had the ball again with a 5 yard penalty for delay of game.  Second and fifteen for the Irish and they tried a pass which fell incomplete but penalty flags were thrown as an Irish player had E-M's Cameron White by the pads and wouldn't let go after the whistle, White reacted and the referee's called a personal foul and ejected White.

After the 15 yard penalty the Irish completed a pass for 22 yards to Arnold with Zeleny making the stop.  Witt headed into the end zone for the Irish with 2:18 left in the half making the score 30-14.  The extra points attempt failed.

The Timberwolves weren't able to add any points to the score before the half.

Kirby Soukup took over the kick off duties after the half.  The Irish had a holding penalty on the kick off and made a few yards on third and one they had an illegal procedure call and turned the ball over to the Timberwolves.

On the kick off Timberwolf Sean Maxson was injured.  The Timberwolves weren't able to move the ball and the third quarter began to slip away with neither team making any progress.  At 2:56 in the third quarter Wick scored another six points but fumbled the extra point attempt.

Zeleny completed a pass for a gain of 9 to Luzum and a first down before he hit Olsen for a pick up and Dinneen but the T-wolves couldn't convert. The Irish had three and out before Exeter-Milligan took possession again but this time the Zeleny and Luzum both carried and Luzum crossed the goal line for six, bringing the score to 36-20.  The 2 point conversion was stopped.

The Irish marched down the field and put six more points on the board but the Timberwolves stopped the extra point.  At the kick off Zeleny bobbled the ball but recovered it and made a 48 yard run but his pass was intercepted and a face mask was called on the Exeter-Milligan squad.

Witt hit Arnold with a 44 yard throw and the Irish posted another six on the board.

After the ball was turned over to Exeter-Milligan they marched down the field with Luzum and Zeleny connected for another six points  Colton Bossaller carried the ball for the extra points but the Irish stopped the run.

The final was 42-26 with Falls City Sacred Heart ending the Timberwolves record setting win streak.  Exeter-Milligan will travel to Meridian this week.