For the second year in a row Dr. Brett Speece's Chiropractic office in Exeter has raised funds to donate to the Exeter-Milligan and Friend Backpack programs.

Last year the office raised over $600 to donate and this year they topped that amount by giving just shy of $900.00.  The office raised the funds through activities held at their Patient Appreciation day on June 6th and a tailgate party on September 19th.

The backpack program in Exeter was started by the Exeter United Methodist Church in 2009.  Over the years, different groups have volunteered to pack the bags with enough food to feed a family of four over the weekend.  The last three years the United Church of Christ in Exeter has filled and sponsored the backpacks.

This year there are approximately four backpacks that go home with kids from the Exeter-Milligan district but there are backpacks available for other families who need them.

Exeter-Milligan Superintendent Paul Sheffield explained, "There is no additional paperwork to fill out for the backpacks except a paper I send to all of the families who qualify for the free or reduced lunch program and they just have to check the "yes" or "no" box if they are interested." 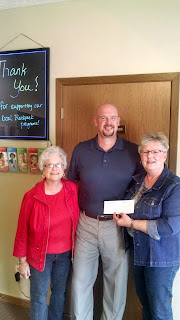 Dr. Speece with members of the United Church of Christ in Exeter who coordinate the backpack program in Exeter, Sharon Dyer, left, and Barb Jansen, right. 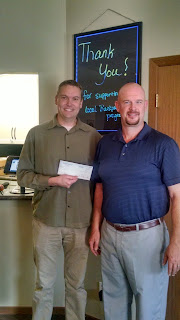 Dr. Speece with Pastor Eric Jensen of the Friend Assembly Church for the Friend backpack program.
Posted by Leesa Bartu at 7:30 AM