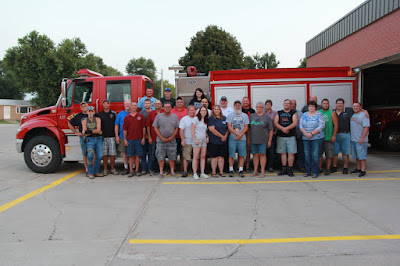 The Exeter Volunteer Fire Department is looking at a full roster this year.  “It’s good to have 35 members to fill our department,” noted Fire Chief John Mueller.

The department and the Village have purchased new leather boots and gloves for the members.  Another upgrade for the department is new emergency warning LED lighting on the exterior of the rescue unit.

Rescue Captain Alan Michl explained the upgrade, “The rescue unit is 16 years old and some of the lights were going bad.  Our unit was in good shape except for those lighting issues.  The lighting was an investment making our unit easier to see.  A side benefit is there will be a lot less wear and tear on the electrical system because the LED uses less than a third of the power than the old lights.”

With the closing of the Exeter Care Center the Exeter Volunteer Fire Department has found itself with more time on its hands.  At one time the department was running close to 60 calls a year with many of those rescue calls at the Care Center.

The center, which closed in March of this year, has not been sold or reopened.  Without those extra patients the department is running closer to 20 calls a year.

This year the department again sponsored their Junior Fire Patrol for fifth and sixth graders in the area. Seven students from Exeter-Milligan school participated in the program.  This year the program was held earlier in the year ending during Fire Safety Week so that many of the outdoor activities could be conducted during fair weather.

The program, which began in 1988, teaches the students basic fire safety along with some first aid.  Several of the current fire department members participated in the Junior Fire Patrol program as elementary students.