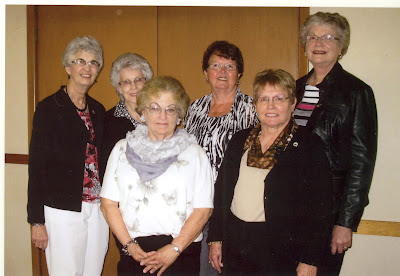 
GFWC Nebraska Dist IV 110th Annual Convention was held October 1, 2015 at the Fairmont American Legion Hall.  Members attending from GFWC Exeter Woman’s Club were Bonnie Cudaback, Patty DeMoss, Kathy Due, Elaine Oldehoeft, Reba Toothman and Karen Chapman.
Registration began at 9:00 a.m. with coffee cakes furnished by the Exeter Woman’s Club.  Dist IV President Nancy Galaway opened the meeting and Parliamentarian Elaine Oldehoeft led the pledge of allegiance and club collect.  Treasurer Bonnie Cudaback gave the credential report showing 48 in attendance from 9 clubs, and also the treasurer’s report.  Elaine presented the convention rules, and International Outreach Chair Karen Chapman introduced officers and guests.  A motion was passed to continue the Fine Arts Festival in Seward in the present format.
NFWC President Jan Jones was the morning speaker and she reported that NFWC donated over $99,800 to 843 projects with 3,374 volunteer hours.  Following a coin march for the Lincoln Child Advocacy Center, the program, “Human Trafficking” was presented by the Nebraska Attorney General’s Office.  Donald Kleine, Assistant United States Attorney – Dist of Nebraska, and Sara Stanley, Special Agent FBI Investigation, both with the U. S. Department of Justice and Kimberly Roewert, Victim Witness Specialist, U.S. Attorney’s Office, spoke about the types of modern-day slavery, some of the outward signs shown by victims, and who to contact if you suspect this unethical and fearful situation.
Linda Hudson, Public Issues Chair, conducted the memorial service for deceased members which included Wilma Murphy, Bernice Hall and Marilyn Manning of the Exeter Woman’s Club.  Patty DeMoss offered a prayer followed by the delicious salad luncheon served by the Fairmont Woman’s Club.  “A Typical Meeting” skit by Fairmont, and an address by NFWC President-Elect Karen Crandall preceded the afternoon fund raising auction.
Wilber Woman’s Club invited everyone to NFWC Dist IV Convention on October 5, 2016.  Bonnie stated 49 in attendance in the final credential report and the meeting was adjourned.
Pictured:  Front row from the left:  Patty DeMoss and Kathy Due.  Back row from the left:  Karen Chapman, Reba Toothman , Elaine Oldehoeft and Bonnie Cudaback.
Posted by Leesa Bartu at 7:30 AM