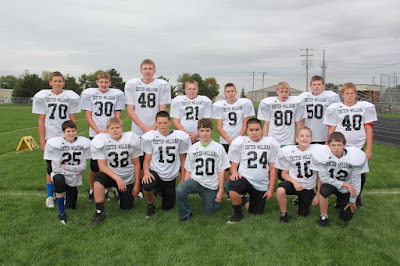 In the opener, on September 8, EM traveled to Diller to take on Diller-Odell. EM took a 14-8 lead at the half and went on to win 20-16. Caleb Horne scored on a 58-yard run and a 79-yard pass reception from Max Zeleny. In addition, Zeleny added a 1-yard TD run. Zeleny threw to Ryan Sharp for a 2-point conversion. Defensively, Horne and Jackson Beethe each recovered D-O fumbles.

On September 15, East Butler came to Friend and handed EM its first loss of the season.  East Butler opened up a 22-0 first quarter lead.  EM played better in the second half, but could not get on the scoreboard.  The game ended with East Butler on top 50-0.

McCool Junction traveled to Milligan on September 21.  The teams were tied at 22 at halftime.  In the second half, EM made 1 of 2 conversions after TDs to win 36-34.  Max Zeleny passed for 2 TDs, a 25-yard pass to Mason Kelly, and a 35-yard pass to Caleb Horne. Kelley added a 11 TD run and Zeleny had runs of 3 and 9 yards. Zeleny hit Kelley and Horne on 2-point passes as well.  Horne also ran one conversion in.  Kelley helped the EM defense with a pass interception.

Milligan was the site of a September 28 game with Meridian. EM opened up a 36-8 halftime lead, with a 22 point second quarter. Caleb Horne had TD runs of 53, 14, and 14 yards.  Max Zeleny added TD passes of 4 yards to Ryan Sharp and 37 yards to Horne. Jackson Beethe also threw a 17 yard TD pass to Dylan Bonds. Two-point conversions were: Horne, 2 runs and Zeleny to Sharp. The EM defense played well.  Horne had an interception. Fumble recoveries were made by Conor Dempsey, Bonds, Mason Kelly, and Sharp.

On October 5, EM traveled to Henderson to take on Heartland.  In the first half, Heartland opened up a 28-14 lead. In the third quarter, EM scored a TD and held Heartland scoreless.  With just over 4 minutes to play, Heartland held sizeable a 50-26 lead.  EM came storming back to tie the game at 50 with 23 seconds remaining.  However, Heartland scored as time ran out, running the ball into the end zone from 32 yards out.  Caleb Horne scored all 7 EM TDs. He had 2 kick returns, 52 and 54 yards, a run of 4 yards, and TD receptions from Max Zeleny of 53, 4, 10, and 35 yards.  Horne threw to Mason Kelly for a 2-point connection. Zeleny had a run and passes to Dylan Bonds and Ryan Sharp for conversions.  On defense, Jackson Beethe and Nick Hayek had pass interceptions and Conor Dempsey and Ty Underwood recovered fumbles.

In the season finale, on October 12, EM played Deshler in Friend. EM scored early and often, opening up a 30-0 first quarter lead. EM added a TD in each of the final 3 quarters, while allowing Deshler a TD on the final play of the game. The final was a 48-6 EM victory. Max Zeleny threw TD passes to Caleb Horne and Mason Kelley of 6 and 35 yards respectively. Zeleny also had a TD run of 51 yards.  Horne had TD runs of 25 and 40 yards. He also returned an interception 18 yards for a TD. Casey Jindra had a TD run from 5 yards out.  Kelley and Horne ran in conversion plays, and Zeleny hit Ryan Sharp as well.  On defense, Horne intercepted two Deshler passes, while Conor Dempsey and Dylan Bonds recovered fumbles for EM. 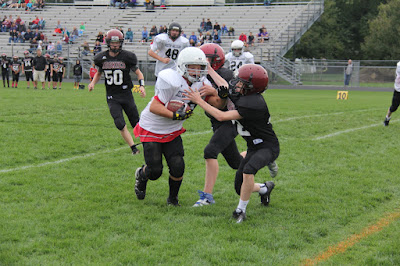 Above -Dylan Bonds holds onto the ball against Heartland Husky players #12 Josh Quiring and #22 Trevor Goertzen.
Below -Caleb Horne carriers the ball shaking off Heartland Husky #4 Augustin Atikpohou with Huskie Cade Oswald behind. 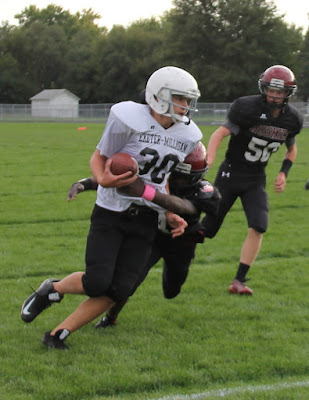 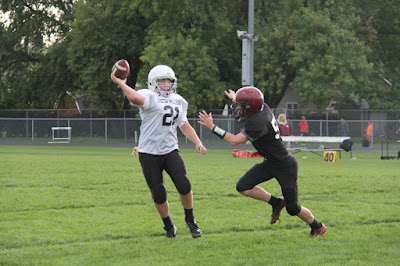 Above - Exeter-Milligan Friend quarterback Max Zeleny throws a pass with pressure from Husky #50 Cade Oswald.  Below - Zeleny runs with the ball with #4 Atikpohou and #2 Boehr after him. 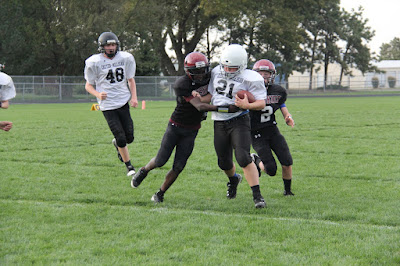 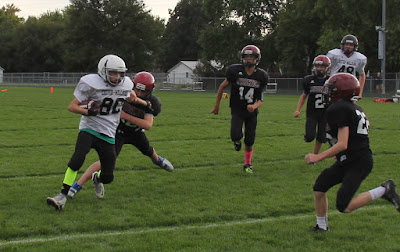