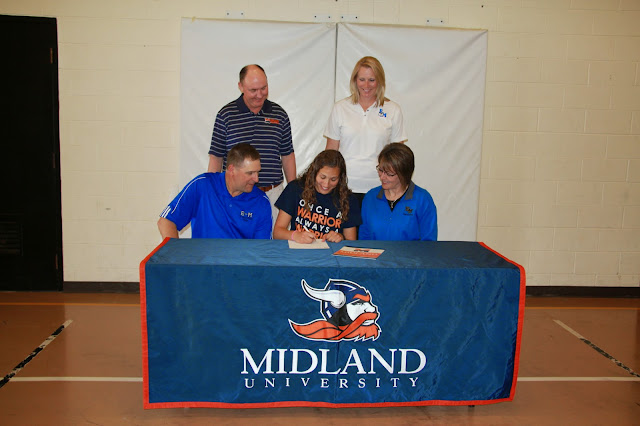 Midland University is where Exeter-Milligan senior Amber Pribyl will step onto the collegiate volleyball scene.

She isn’t the first Pribyl to do so and will follow her sister, Heather, a Midland graduating senior who helped lead the volleyball team to two back to back NAIA National Championship Tournament appearances.

Midland Coach Paul Giesselmann has no doubt that Amber is a great fit for Midland, “I think one of things we always look for when we are  for recruiting student athletes for Midland for volleyball is we want to look at high character young women and Amber fits that obviously.  We  want great students and she fits that category. For us we want a well-rounded athlete, not necessarily the young girl who her whole life all she did was volleyball. We want kids that are multi-sport athletes so we feel like they have a lot of potential left in them.  That is what we see in Amber, we see that multi-sport athlete, high character, good student.”

Pribyl is comfortable with the campus and the program at Midland, “I love their campus and their volleyball program.  I am familiar with them and the way they do things.”

Part of what Giesselmann sees in Pribyl is her athleticism.  “We aren’t 100 percent sure where we are going to play her yet . . .in the middle or on the right side.  The thing is we know what we are getting with her and her family because her older sister obviously was a great player and a great role model for the program and we see Amber being that same type of player.”

Exeter-Milligan Coach White noted that Pribyl will make an immediate impact, “Amber has the ability to control the net with her defensive skills.  She has great jumping ability and moves from pin to pin with ease.  She will contribute immediately to their team because she will provide their varsity with quality competition in practice.“

Pribyl attributes a lot of her success in volleyball to White.  “We have always gone hard with Coach White.  We have always lifted hard in the summers and gone even harder in the preseason conditioning and then the beginning practices of the season.”

Coach White sees a bright future for Pribyl, “Amber continues to grow as a player.  She certainly hasn't reached her potential, and I am excited to see her take her skills to the next level.  Amber is a great all-around student and athlete.  She is just a very well-rounded individual and I am sure she will thrive in a college setting.”

Gieselmann appreciated where White has taken the program at Exeter-Milligan, “Darcy does a great job obviously with the program down here.  I thought it was outstanding to have Amber being able to finish her career at the state tournament because that is one of the things we look for when we are looking at kids we want student athletes who have been playing in pressure situations and I will tell you what there is no more of a pressure situation than playing at a district final and if you don’t win you aren’t going to state.”

“Darcy has done a nice job here over the years getting to state tournaments so it puts them in those situations so we know how they are going to react once they get to college.”

Pribyl noted the difference that the state tournaments have made in her career, “Going to state makes volleyball more fun. State gets you playing at a higher level.  It’s the best of the best you’re playing with.  We’ve been successful and hope to continue the success in college.  Hopefully we can do that at nationals, again.“

White was confident in Pribyl’s success at the college level, “I feel that any athlete or individual who has the ability (and gets the chance) to continue playing their sport in college has the benefit of enhancing their college experience because it provides them with a "ready-made" family in their team, it gives them the opportunity to compete, travel, and meet new people.  It requires commitment, desire, and hard work.  College athletes learn how to manage their time and tend to be very responsible individuals.”

Pribyl has received accolades in all three sports at Exeter-Milligan in addition to her success in the classroom.  Her senior year Amber was named on the CRC All-Conference First Team, the Omaha World Herald First Team, the Lincoln Journal Star First team and the York News Times All Area Team.  As Giesselmann noted Pribyl is a multi-talented athlete also garnering recognition for her talents on the basketball court this year.  Pribyl was an honorable mention for the CRC All-Conference team along with one from the Nebraska Prep Zone All-Nebraska team.  The York News Times chose her as a member on their all-area team. Her junior year she topped the York News Times lists in rebounds - total/AVG per game and was third in the area for steals. Pribyl has consistently qualified for the State track meet for Exeter-Milligan  on both a relay team and in high jump and will most likely this year as well.  She was chosen as the Exeter-Milligan Senior Female Athlete of the Year.