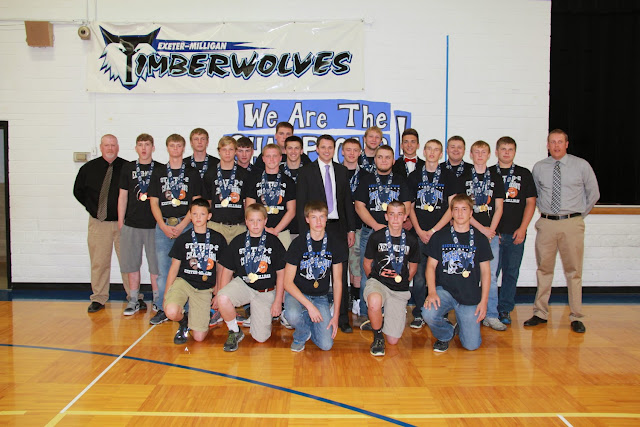 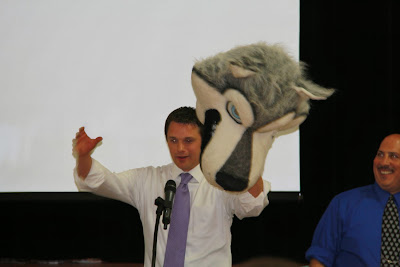 Exeter-Milligan held their Athletic Banquet on Tuesday, April 28th in the gymnasium on the Exeter campus.
This year there was a surprise guest speaker, Kevin Sjuts, the sports anchor for Channel 10/11 in Lincoln.  Sjuts has received multiple awards for sportscasting including the 2013 Nebraska Sportscaster of the year.
Sjuts shared how much he enjoyed following of the Timberwolf teams in their bids at the championship levels.  He also noted that a Nebraska class D school has never won a dual championship in football and basketball until Exeter-Milligan did this year.
He went on to share the reasons he thought the teams at Exeter-Milligan were so successful, “Number one, community support, number two coaching, and also the love of sports.”
The 10/11 sports crew covered many of Exeter-Milligan’s home football games and thanked the community for being so welcoming to their crew.
Sjuts parting words to the audience were, “Keep those things to remind yourselves of what you have been able to do.  Save those shirts, newspaper clippings, pictures.  Someday you might be wearing one of those shirts while you are out mowing the grass and someone will come up to you and ask you if you were on that team.  Imagine what it will be like to say, ‘yes’.”
All of the Exeter-Milligan athletes were recognized during the banquet as each of the coaches talked about their season and their teams.
During the banquet two freshman, Kelsey Bigelow and Seth Maxson, were recognized with the Rookie of the Year award.  Sydney Hall was acknowledged as the female team player of the year while Dalton Zelenka was named the male team player of the year.
The coaches also recognized Amber Pribyl as the female athlete of the year and Kyle Jensen as the male athlete of the year.
Posted by Leesa Bartu at 7:30 AM