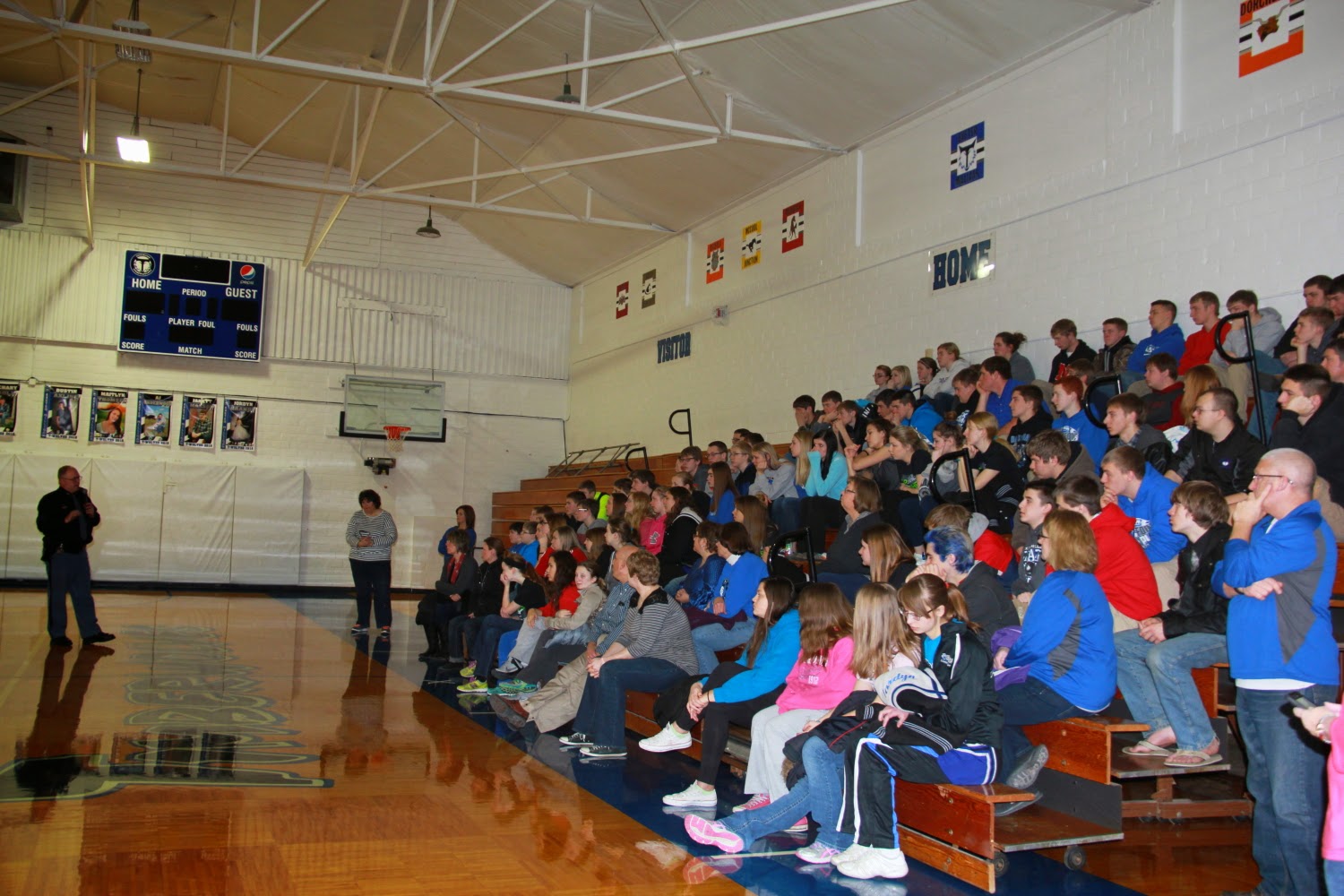 “We want to bring awareness of distracted driving to you, our students,” Mrs. MaryLou Vossler, Family/Consumer Science teacher at Exeter-Milligan told the seventh through twelfth graders on Friday morning.

In her introduction of Sergeant Tim Pickering, a member of the Nebraska State Patrol, Vossler warned the students, “What Trooper Pickering shows you should be alarming.”

The presentation was a joint effort of Vossler and Exeter-Milligan Superintendent Paul Sheffield.

The crowd in the gym was silent as Pickering shared some staggering statistics with the students, “One in six students binge drink in Nebraska. Nebraska is the number two state in the nation in binge drinking.  That isn’t something you can be proud of.  It can cost Nebraskan’s $423,900,000 a year between accidents, deaths, treatment, etc.”

Trooper Pickering reminded the students “Nothing that happens in a vehicle just happens to you and you are the only one affected by it.”

He went on to emphasize the importance of wearing a seatbelt, “It is a restraint required to keep you in your seat.  Even in a slow crash you bounce around.  Relying on an airbag is not enough.”

He showed the students multiple videos which highlighted the importance of each occupant of the car being belted in so that they don’t harm the other belted passengers.  Pickering noted that in Nebraska a child was killed in a car accident because, even though he was belted in, his parent was not and the impact of the parent on the child is what killed the child.

Along with the importance of restraint use, Pickering emphasized the dangers of distracted driving.  “When you are driving that’s all you should be doing.  Not eating, texting, or talking on the phone, just driving. The biggest factor involving crashes in Nebraska is distracted driving.  Number two is alcohol, but it used to be number one.”

Pickering showed several videos on what happens when drivers try to multi-task in the car, “We get complacent because we don’t have that volume of traffic.”

He transitioned back to the importance of seat belts as he showed a sequence of videos on what happens in a rollover crash without restraints.

Pickering shared last year’s death statistics which include 260 deaths on Nebraska roads.  “Eighty-one of those drivers were killed in a rollover accident and out of that 81 only four were wearing a restraint.  They were not ejected but still a fatality because some crashes are not survivable.  We see a pattern.  If you leave the roadway chances are you will rollover.”

A 24 year veteran with the State Patrol, Pickering shared with the students “The worst thing I have to do is go and tell a parent, husband or wife that their loved one has died.”

Before taking the students outside to demonstrate with the Nebraska State Patrol rollover vehicle, Pickering reminded them “It’s not comfortable for me to wear a seatbelt, but I don’t want to be a statistic.”

Pickering demonstrated what happens when a loose backpack flies around with a belted passenger in the rollover vehicle and then showed them what happens when the driver is not belted in.  He pointed out that the “rollover dummy” went out of the vehicle in the same direction the car was rolling and so most likely the car would roll over the ejected person.

Recently the FCCLA received a grant for $500 from State Farm Insurance.  With these funds they purchased educational DVD's and visually impaired goggles. Before heading outside for the rollover demonstration Vossler offered the students pencils, wristbands and air fresheners which were compliments of the Nebraska Safety Council:  Teens in the Driver's Seat. 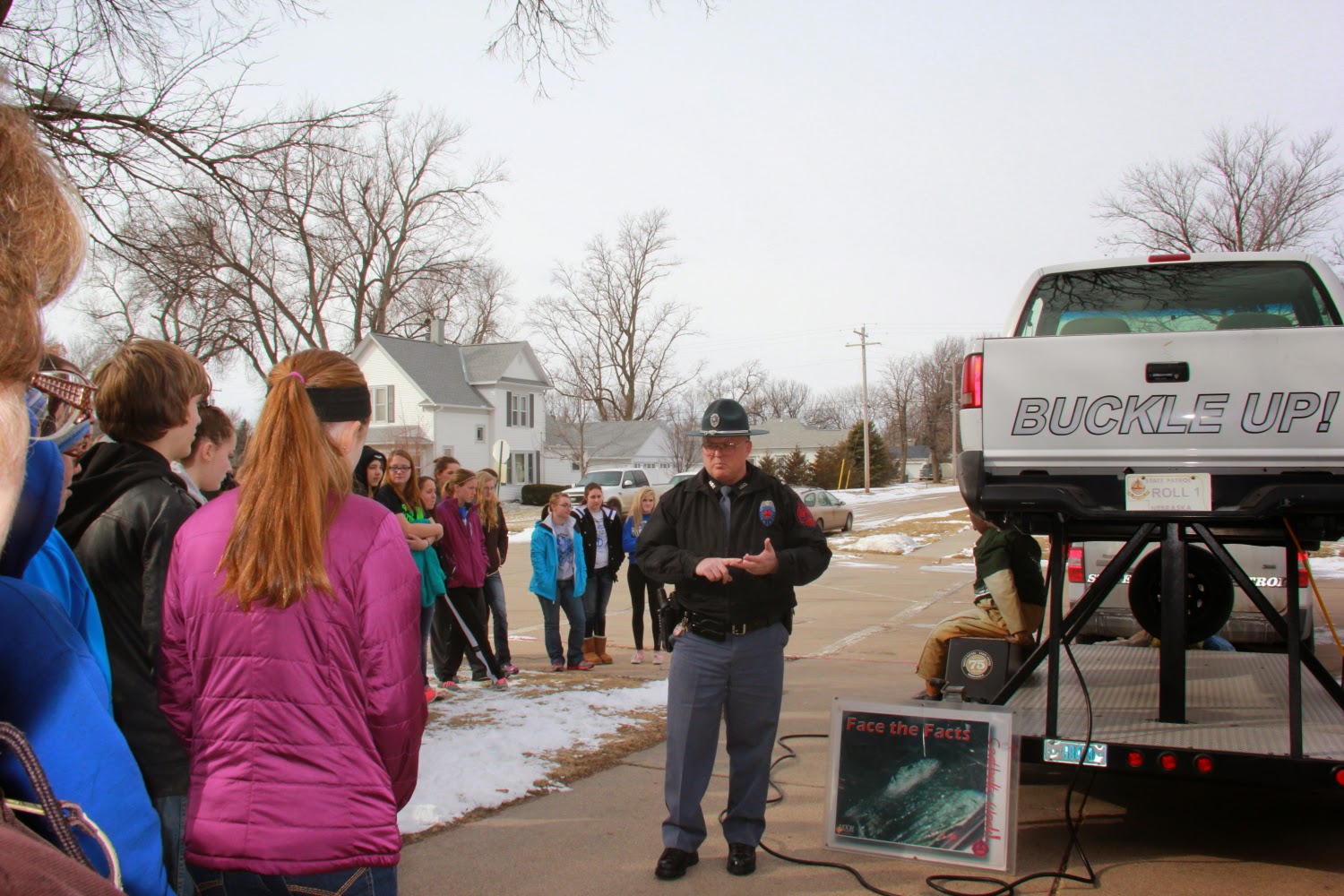 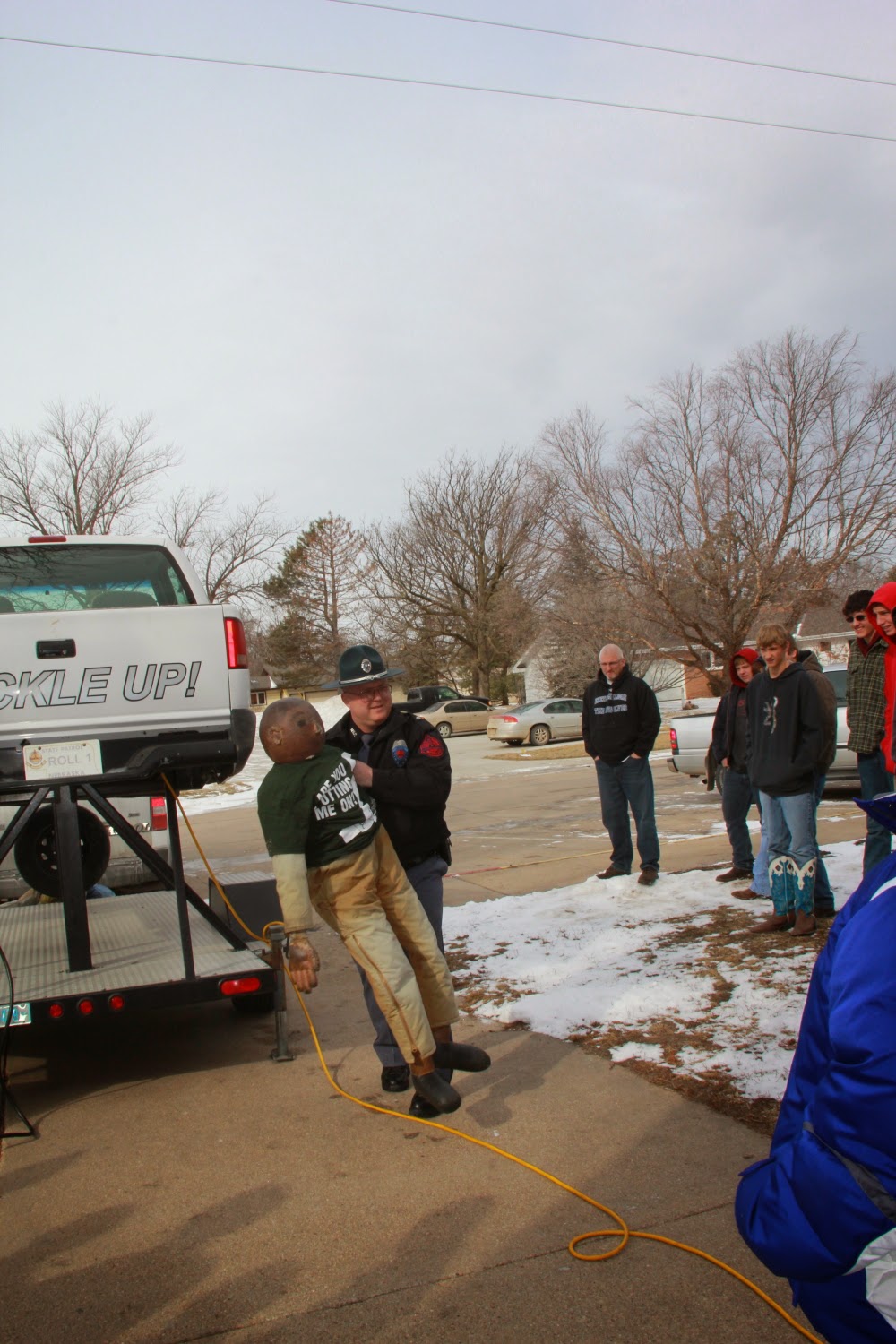