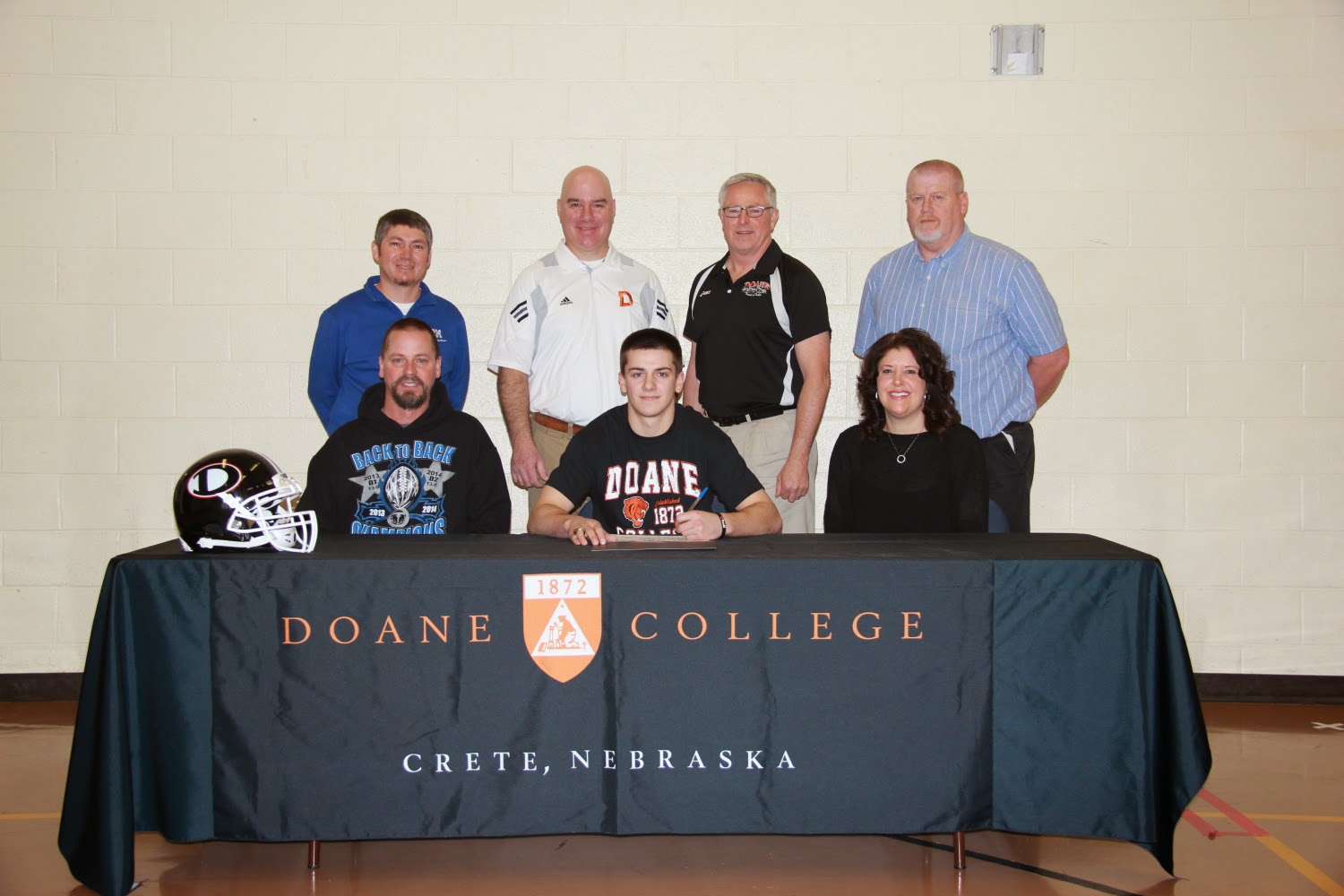 
Exeter-Milligan’s Dusty Axline signed with Doane on Wednesday, Feb 25.  Dusty began primarily interested in track but decided to participate in their football program as well.

“I felt like a small school fit best for me.  I am a fan of Doane and the school’s coaches,” explained Axline. “I’ve always loved track and love to pole vault.  The football coach got a hold of me and I figured I would do both.  I have had really good coaches at Exeter-Milligan.  I have been able to start when I was young, especially in track in junior high and in high school on the football field I have had a lot of playing time which really helped in building the team.  Coach Filipi taught me a lot about discipline and how to keep my head in the game despite what is happening.  Coach Murphy has helped me a lot with finding the right pole for vaulting and just getting things done.”

Doane’s football coach Matt Franzen was happy to get a double package,  “It’s going to be a good deal for us getting both Dusty and Kyle Jensen.  As far as athleticism he has had a lot of success.  I see the successes carrying over to give our freshman class a  good start.  I was really really impressed watching him play this year.  He has a lot of athletic ability and we have also been impressed with his confidence.   He is a quality young man that we are excited to have in our program.”

“We plan to use him on defense as a linebacker either inside or outside.  We will figure out pretty quickly which one he is suited for.”

Doane track coach Ed Fye sees the potential in small school athletes like Axline, “He is just athletic.  At smaller schools we see kids who do three sports and maintain that athleticism.  He is a great leader and comes from a winning program.  We hope to see him carry that over.  We plan to have him concentrate on pole vault but later he may do multiple events if we can use him in other ways.”

Exeter-Milligan track coach Brian Murphy expects a lot of success for Axline at Doane, “I think he will do a great job, he is a great athlete.  He’s been dedicated, training before school and he has spent the time at pole vaulting and he has the desire to succeed.”

Exeter-Milligan head football coach Dean Filipi sees Axline fitting in well with the Doane program, “He will give so much with his work ethic.  The team person he is will help the rest of the team out.  He works hard and is a real student of the game.”

Axline plans to major in computer science.
Posted by Leesa Bartu at 7:30 AM