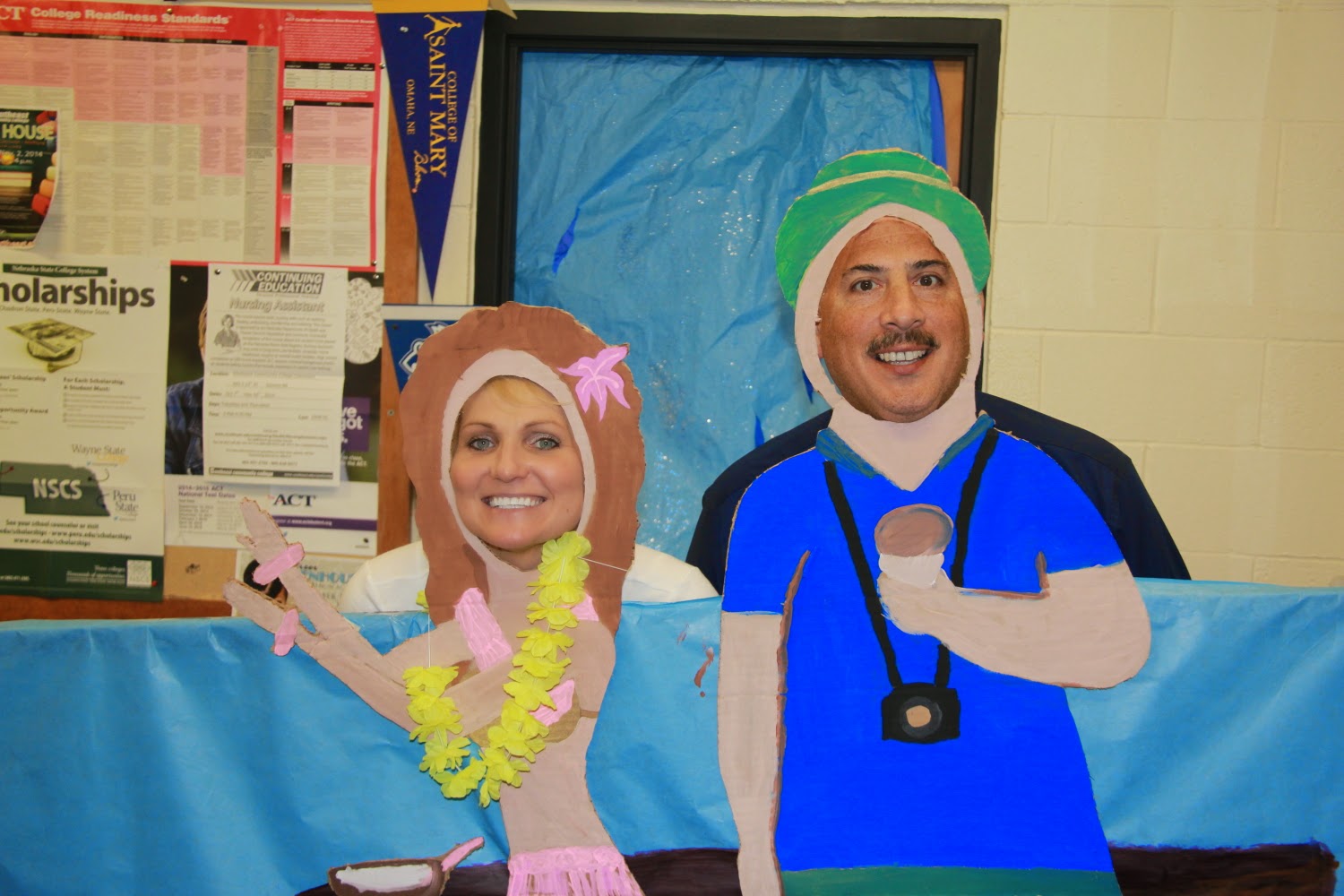 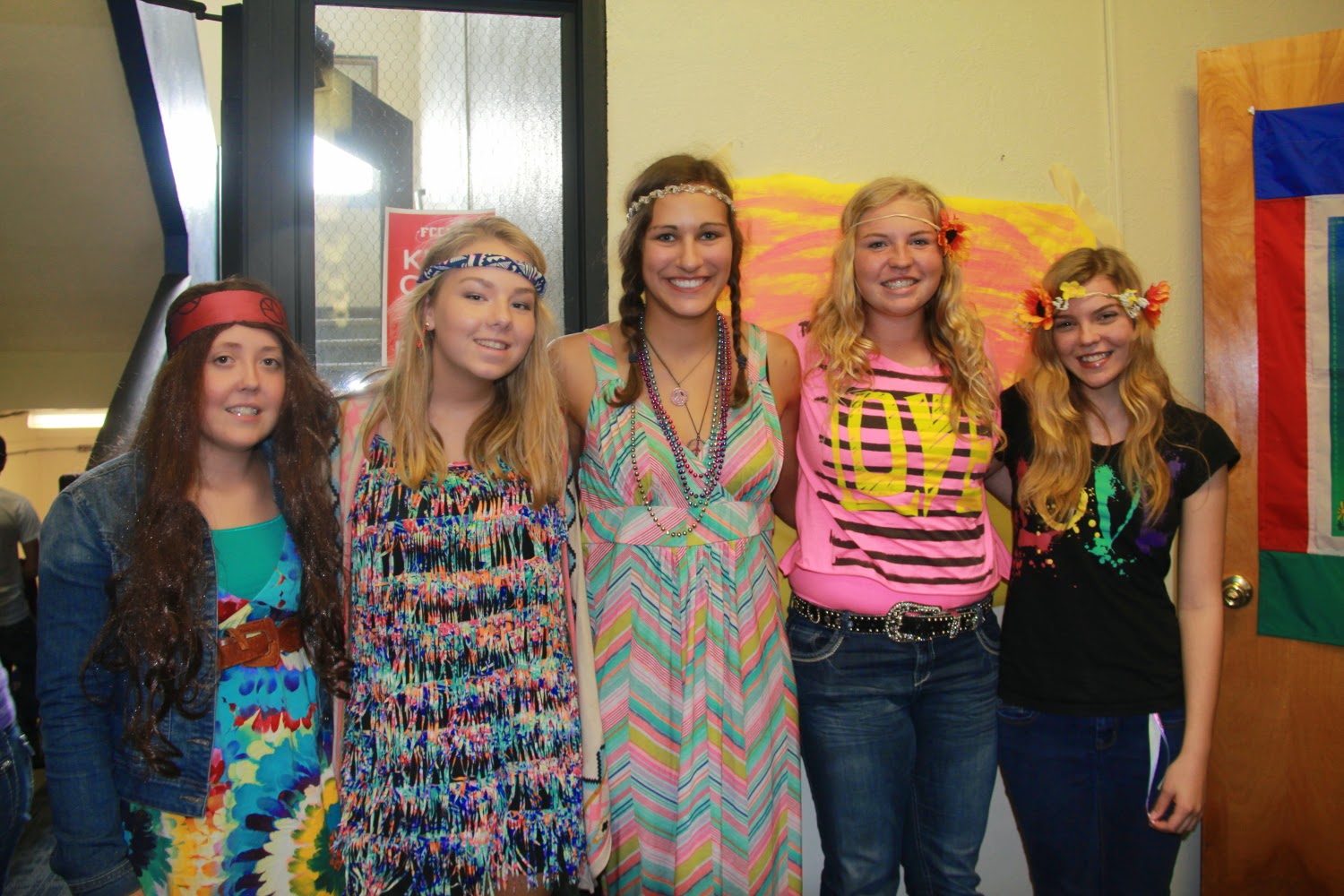 Wednesday was Hippie Day and these Hippie’s were showing their spirit from left to right:  Katie Mounce, Cookie Koopman, Amber Pribyl, Alexis Uldrich and Katie Moody. 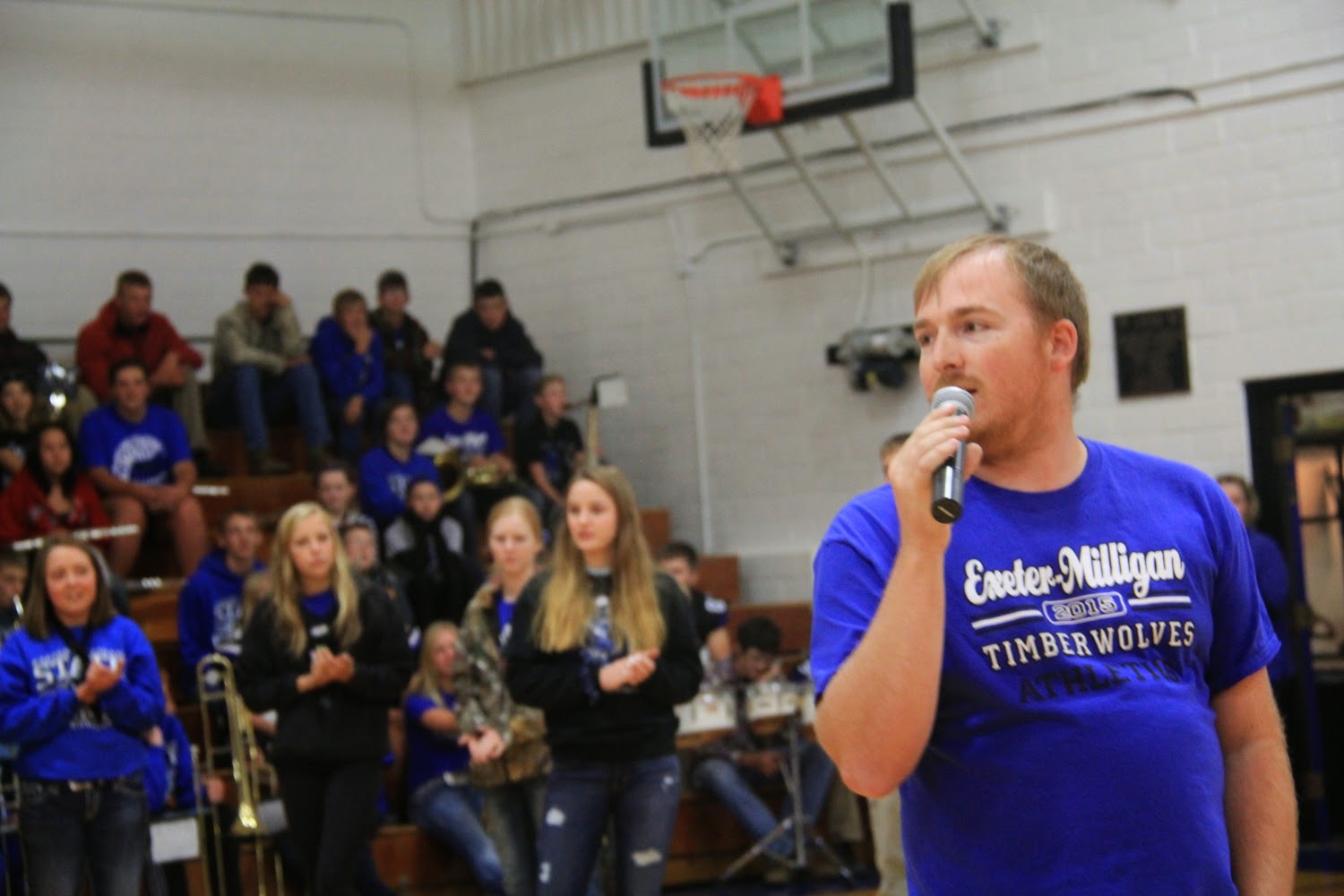 Starting the Homecoming Pep Rally off was Mr. Matt Nicholas a.k.a. Simon for a school-wide game of Simon Says. 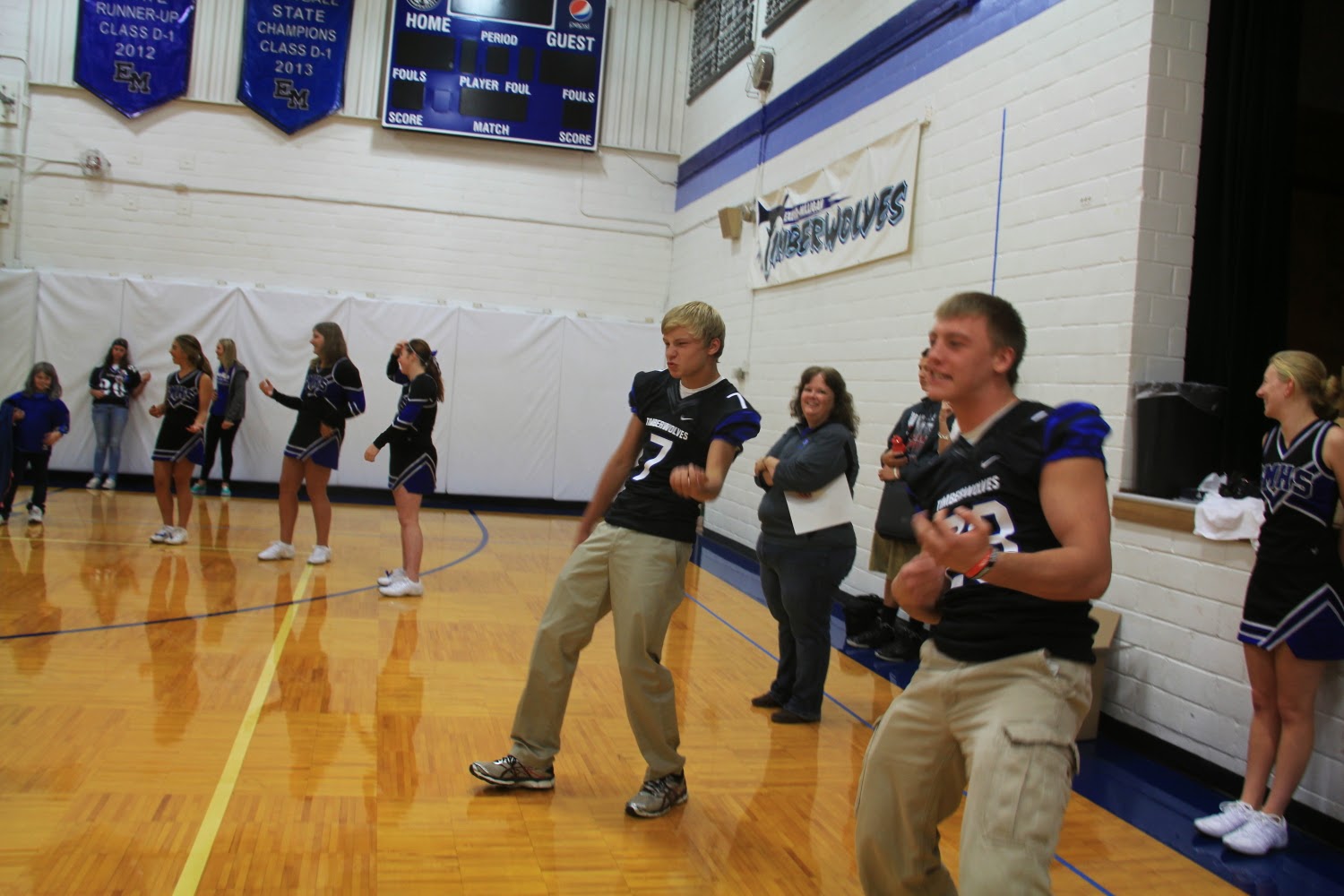 Deeply involved in their air guitar solo’s for Simon Says are Kyle Jensen (right) and Trevor Luzum.  Miss Severson supervises from behind. 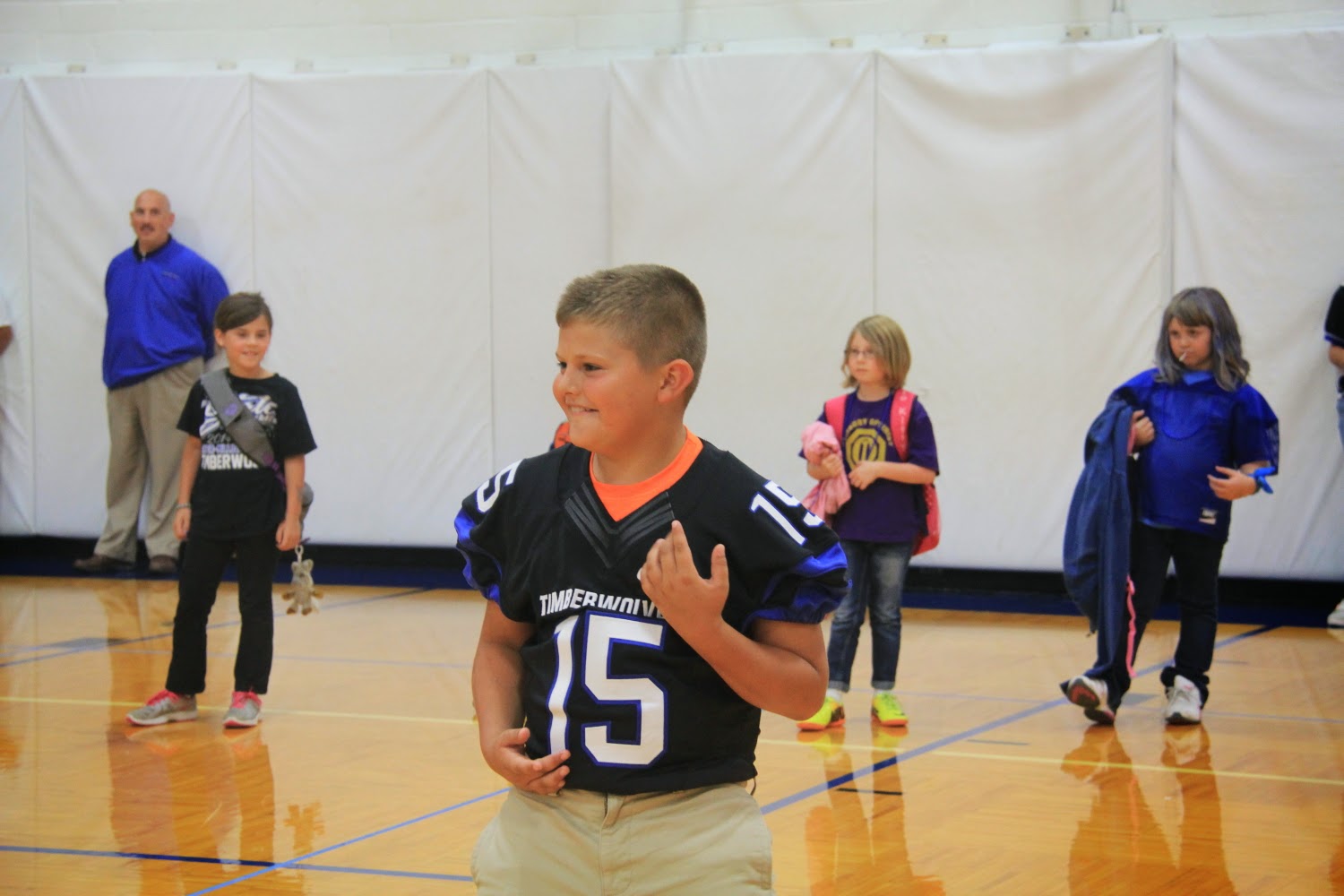 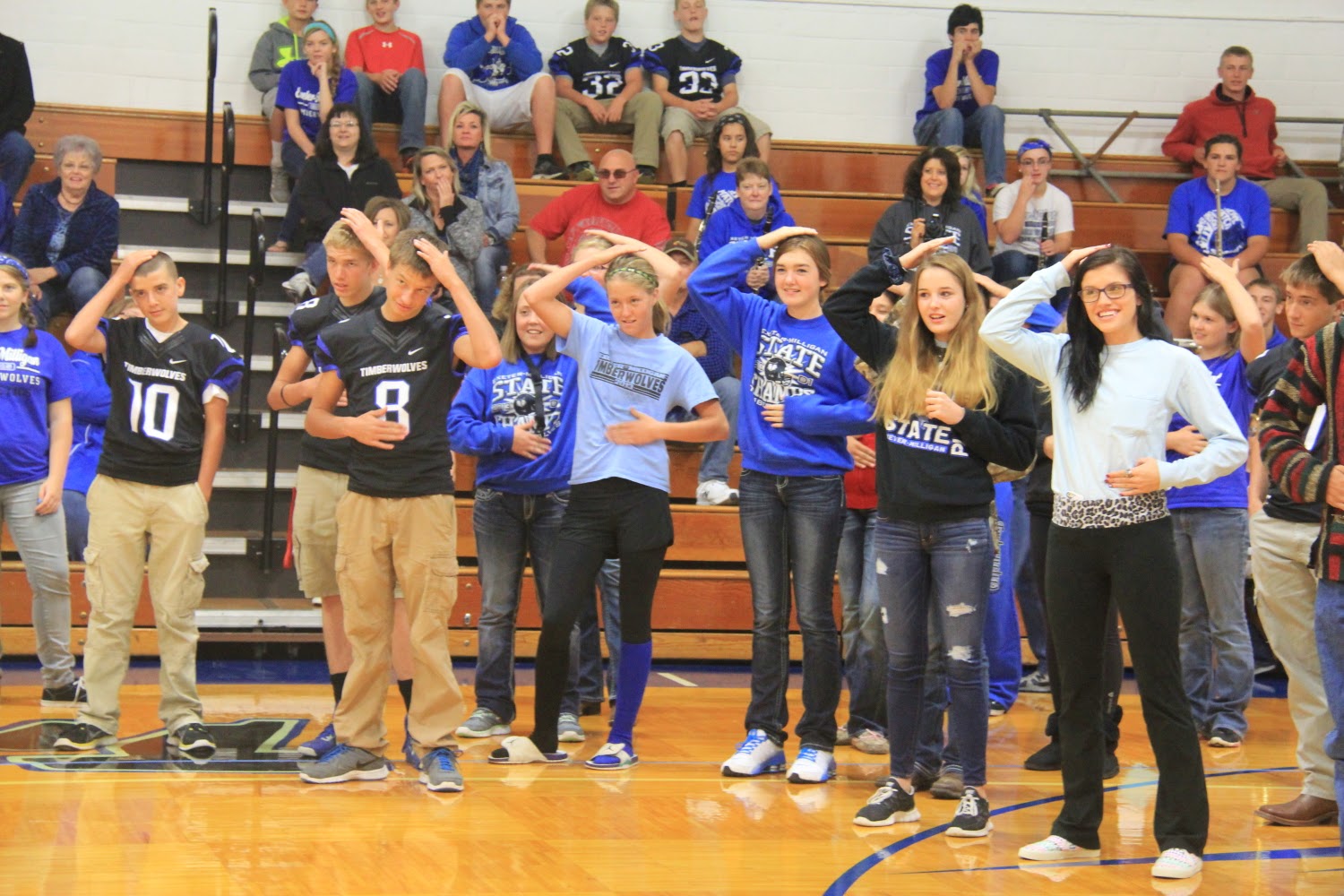 Exeter-Milligan High School students show their multi-tasking skills patting their head and rubbing their tummy at the same time during Simon Says at the Homecoming Pep Rally.

Exeter-Milligan students enjoyed celebrating Homeing during the week of September 8  culminating in a Pep Rally in Exeter on Friday, September 12th to get ready for the Football game versus the Sterling Jets.
Some of the students went all out dressing in pajama’s on Monday, as their favorite Super Hero on Tuesday and Wednesday celebrated Hippie Day.  Thursday each class was assigned a different color and Friday was Spirit Day.

There was a hall decorations challenge.  First place in the Spirit Cup Challenge were the Freshmen, second place went to the seventh grade class and third place went to the Juniors. The Cheerleaders held a pep rally on Friday in the gym with a school wide game of Simon Says.  The band played and the Senior football players were challenged to build Styrofoam airplanes and fly them across the gym floor.
The Homecoming court was presented immediately following the football game with Freshmen attendants Kaitlyn Vavra and Eric Olsen, Sophomore attendants Hailey Luzum and Trevor Luzum, Junior Attendants Brianna Beatham and Johnathon Mounce.  Seniors included Duchess Maitlyn Thomsen, Duke Kyle Jensen, Princess Madison Horne and Prince Derek Luzum and the crowning of Queen Amber Pribyl and King Dusty Axline.