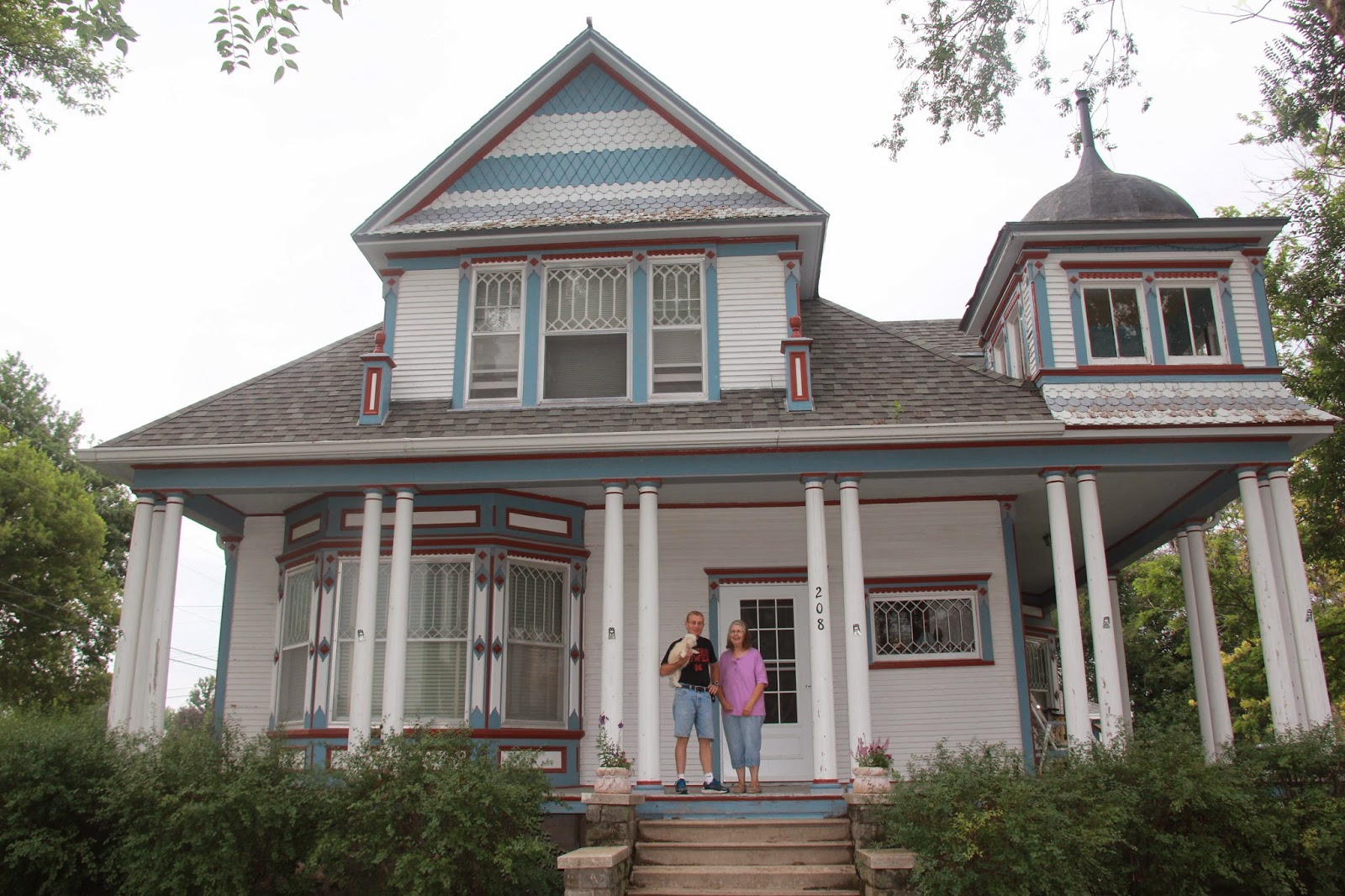 Tucked away a block off Exeter’s main street sits a beautiful Victorian home that has been lovingly preserved for three generations of the same family.

John and Jeretta Tauriella live at 208 S. Burlington Avenue in Exeter, but they don’t just reside there, they are the third generation to preserve this masterpiece.

The house, a beautiful example of Victorian architecture, was built in 1907 by Dr. A. B. Stratton one of the pioneer doctors in the village of Exeter.  He practiced medicine in Exeter from 1890 until 1930 and died in 1931.

After the death of Dr. Stratton, Dr. Chester Lewellen and his wife Jeanette bought the home.  The Lewellen’s had no children of their own but adopted two daughters, Marjorie and Virginia, from a good friend who was raising a large family in Harrison, Ark. during the depression.

The girls came to live in Exeter and Marjorie graduated from Exeter High School in 1937 and married Frank Tauriella (they met at the Fairmont Air Force Base). The couple came back to Exeter to raise their family in this home.  All three of their children, Judy, Nancy and John, grew up in the home.

For one year, Judy and husband, Charles, lived in the home.

In 1973 John and Jeretta got married and moved in. “We only had four chairs to fill this huge house,” explained the Tauriella’s.

With three very large rooms on the main floor that looked even bigger with 12’ ceilings, the Tauriella’s had quite a task at hand.  Thus began the Tauriella’s dedication to the home.  They have repapered every room in the house, “It took a long time as it had very old wallpaper.  I counted up to 17 layers on one wall,” explained John.

“This house just has character.  We have rearranged some of the rooms.  We use what was considered a bedroom for our dining room now.  It is nice to have such big rooms to host our family gatherings.  We host everyone for Thanksgiving, Christmas and Easter and even have a family reunion planned for the weekend.”

The house is also filled with memories for the family.  “When I was growing up we called the south west room the music room.  Everyone in the family played the piano or organ except for me,” explained John.  “We spent a lot of time singing and playing in that room.”

Tauriella recalls that his Grandma Jeanette was very proper and kept the table set with formal
dinnerware in the dining room.  “She had all kinds of card parties and played bridge and pinochle.”

The Tauriella’s have retained the original light fixtures in the home but don’t regularly use them.  They also restored what they consider to be the original kitchen cabinets.  Some of the kitchen woodwork was painted and John stripped all of that but one door frame that the family used to record the kids’ growth.

Some of the woodwork in the upstairs bedrooms had been painted by John’s sisters but he stripped that woodwork bringing it back to its original beauty.  The June 3 hailstorm in Exeter broke nine of the original windows in the home.  “The restoration company was able to redo the windows with all of the mullions and did a beautiful job.  The glass isn’t the same old wavy glass but the character of the house was maintained,” explained John.

One of the most unique features of the home is the cupola in front.  It is set off the roof and has no entry from the house.  “You have to go up on the roof from a bedroom window or go up on the roof from a ladder.  When we were kids we started to fix it up and paint it.  My mom slept there in the summer in high school.  The windows all tilt out so she could lay and look at the stars.”

In the entryway, the opening is framed with beautiful wood fretwork.  “I didn’t remember this wood as a child and once I was doing sit-ups in the room, looked up and realized that something had been in the opening before.  I then realized I had been walking around the pieces for years in the basement that belonged there.  My brother-in-law helped me piece them back together and restore them.”

John noted that there was also a piece of fretwork that partially framed the entry to the living room and he knows where the pieces are but hasn’t tackled that project as the restoration it needs is very extensive.
A few years ago John repainted the entire home paying special attention to the front of the house, adding lots of color accents to emphasize the intricate woodwork on the front of the home.

Occasionally people stop by most often to comment about the cupola.  Interestingly enough just recently a postcard surfaced on Ebay which has a picture of the Exeter Boy Scout Troop in front of the home which is easily recognizable because of the cupola.  The date on the postcard is listed as 1913.

The Tauriella’s don’t believe the house is inhabited by ghosts but recalled an instance in the mid-70’s when John’s sister Nancy was staying with them, “We had gone to bed and Nancy wasn’t in yet.  Then we heard all of the kitchen cupboards open and close loudly and footsteps distinctly tromp up the steps.  We thought ‘Gee, Nan, you could be a little quieter.’ When we brought it up the next day she told us she hadn’t been in the house.”

John and Jeretta obviously enjoy the house but it does have its challenges, “The refrigerator is located in a nook next to the kitchen and heating and cooling it are not easy.  We put in a wood stove a few years ago and that has made a huge difference.  We shut some of the rooms off so we can concentrate the heat.”

The Tauriella’s haven’t given up hope on passing it on to the next generation as they just welcomed their sixth grandchild and first grandson to the family last week. 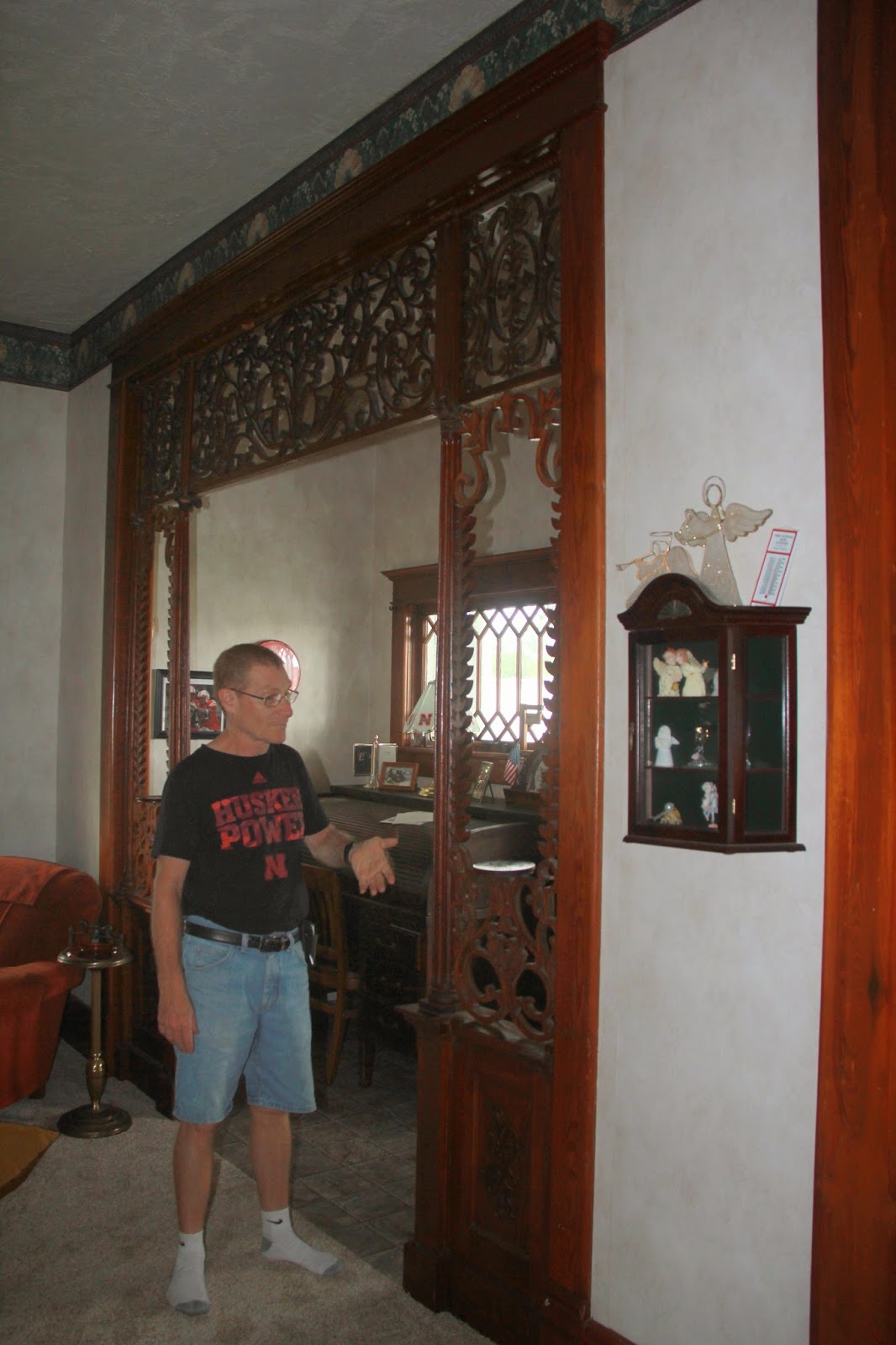 John Tauriella explains the story of realizing something was missing in the front entryway and then remembering the pieces of fretwork he knew where in the basement and restoring the puzzle and putting it back in its place. (above and below) 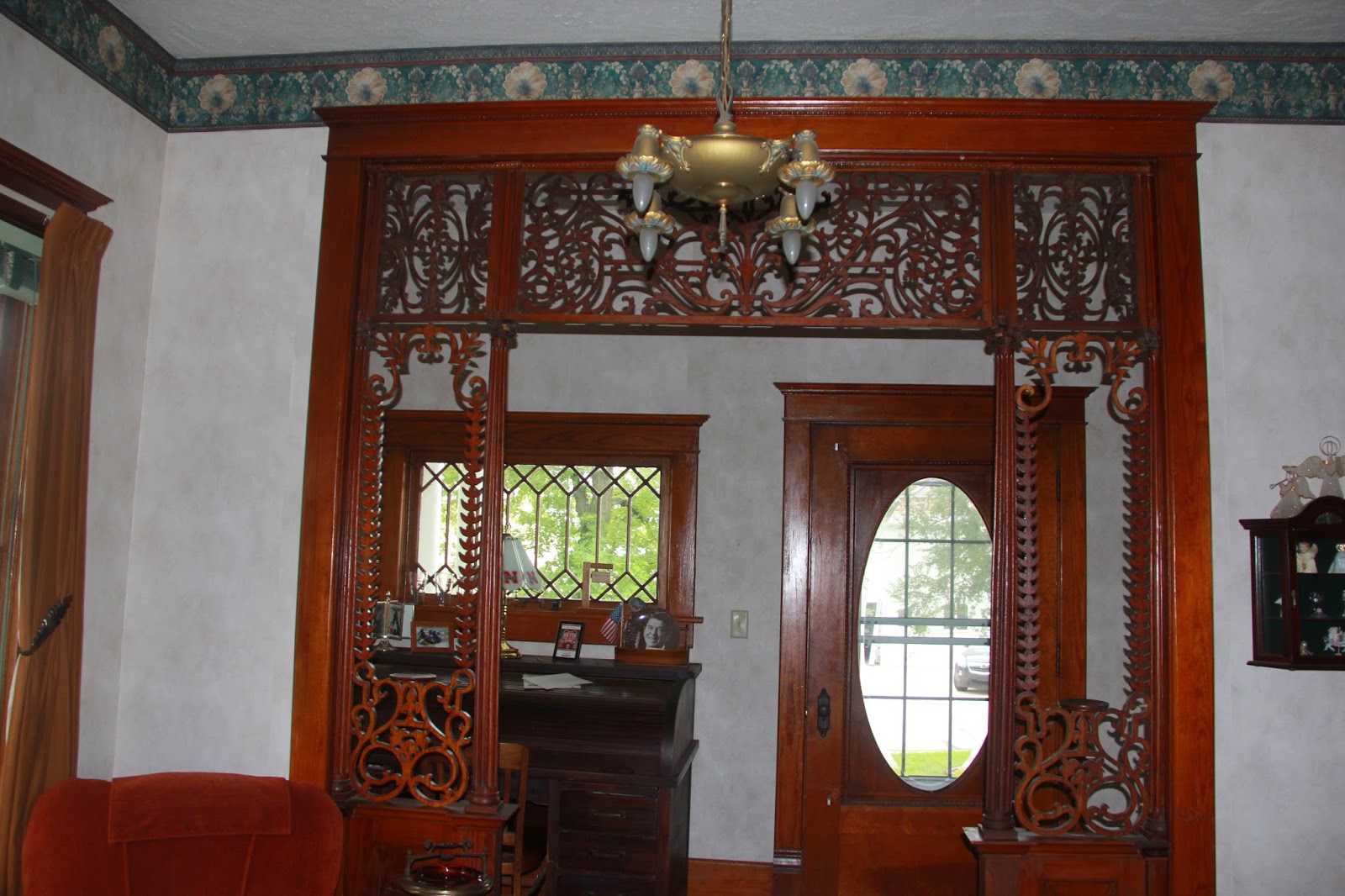 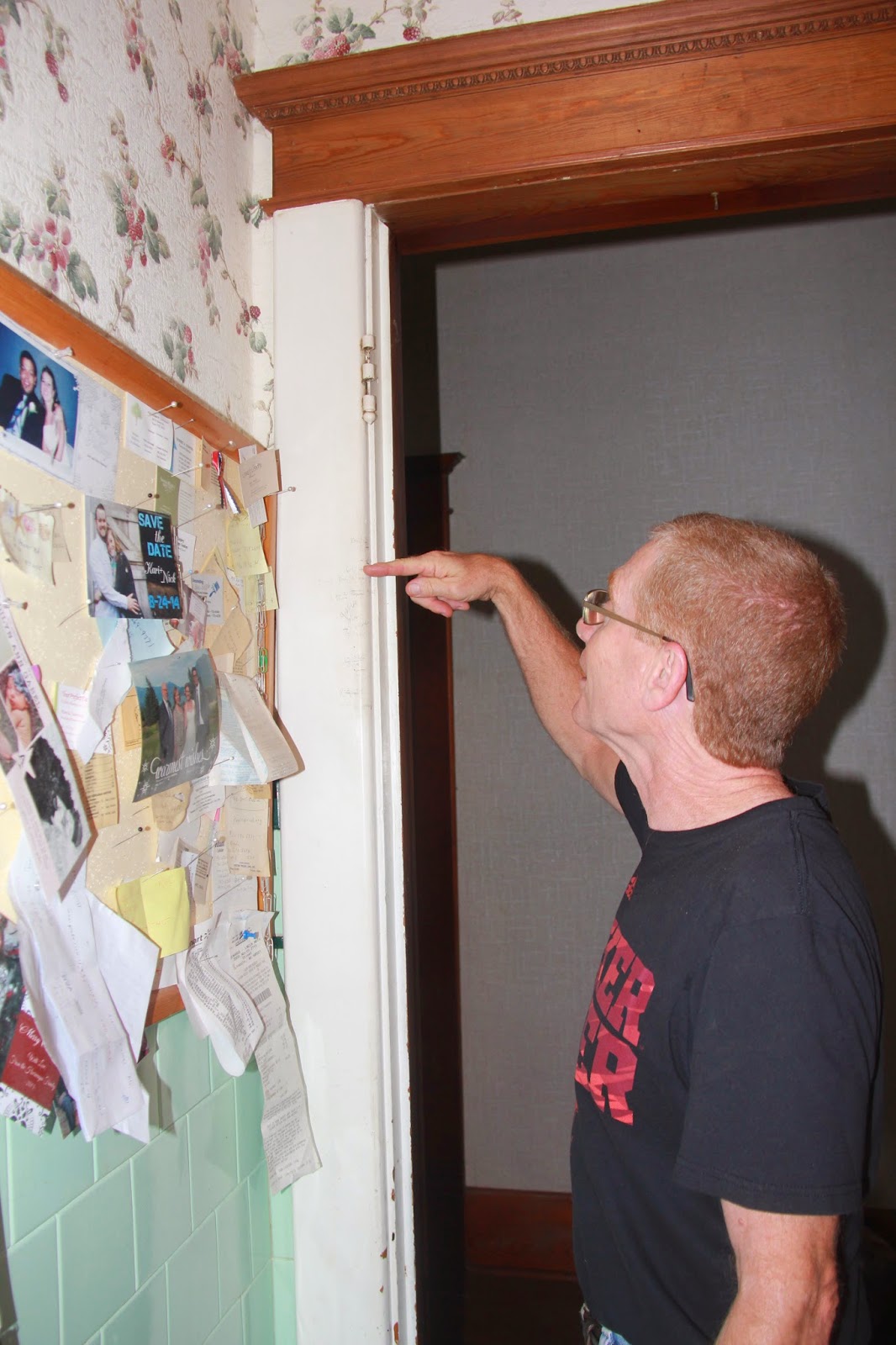 John Tauriella shows the marks on the door frame in the kitchen which include the height marks for himself and his sisters along with the marks he and his wife Jeretta made for their children.  This is the one piece of trim in the house that he hasn't restored.
Posted by Leesa Bartu at 7:30 AM