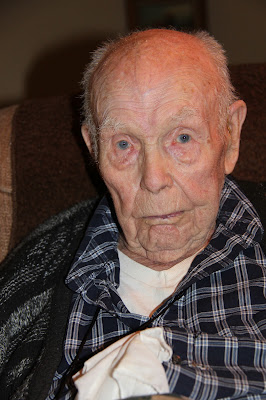 Floyd “Herb” Mason has lived in Fillmore County for most of his 100 years.

The Exeter resident was born April 25, 1913 on a farm near Geneva and has been in the county for the majority of his life.

Mason grew up on a farm outside of Geneva.  He recalled some of the special events in his life with one of the highlights watching his Dad raise Hampshire hogs and winning the grand champion four years in a row at the State Fair.  He recalled how they had to load the hogs up in a freight car on the train to haul them to the fairgrounds in Lincoln.  He also recalls the huge silver cup that held a special place in his family’s home.
Mason always worked hard, “I did anything I could get.  When I was twelve years old I was plowing with two mules and three horses three miles west of Geneva.”

He also worked at the Economy Paint Mills in Geneva and even “mowed lawns.  I did everything I could to make a buck.”

Another special memory was of a little boy he encountered after a day at the paint mill.  He asked his mom who the little boy was in the back yard and she told him “a little boy I took to raise.”
Dale Saum was the young man, he grew up to be a special person in the family and still keeps in contact and visits the Mason’s regularly.  Donnie also recalled how his own parents took in a foster son to raise in the early 1980’s named Warren Abbot.  Warren also keeps in contact with the Mason’s.

Mason spent some time in California after completing the ninth grade in Geneva.  He drove his brother in law and sister to the west coast when he was 16 years old and ended up working there, making home brew during Prohibition.  He worked  for Sully Salvador, a champion middle weight prize fighter, “We started with four 20-gallon crocks and got up to six crocks. I learned to make beer from Dobinspeck, he was the brew master for Buffalo Brew.”

Eventually he bought a Dodge car for $30 and headed back to Nebraska where the car quit just outside of Hastings.  He pulled it home “and in thirty minutes in the yard I had it running again.”

Mason worked here and there until 1942 when he enlisted in the service.  He worked at the Mead Ordinance plant before heading overseas. He served in Iran working on trucks for the supply line to fight against the Germans who were in Russia.  When he returned he became a Sergeant, and was stationed at Fort Warren, Wyoming as a truck driving instructor.

When he returned from the war “I was walking down the street carrying my duffel bag and had a job before I even got back home.”

He married his wife Annabel in 1946 in Washington, KS.  They were headed for Marysville, KS but had a flat tire in Washington.  They had a brand new courthouse there so they got a license and were married by the judge before heading to Lincoln for a honeymoon on Capitol Beach.

They moved to Exeter in 1949 and raised their family in town. In the 1950’s he worked for Foreman, Inc.  Hauling bulk oil and managing the fuel station for the Foreman’s.  He also was one of the first mechanics for B & B Chevrolet in Friend.  He was a Corvair mechanic there recalling that “you pretty near had to pull the motor out of them to get anything fixed.”

If you ask Mason what the secret to his 100 years was, “I always worked hard and Annabelle’s cooking.”

The community of Exeter knew Annabelle’s cooking well as she and Herb opened a café and gas station on the west edge of town in 1966.  In the early days they stayed open until midnight, often finishing up at 2 a.m. and reopening with coffee ready at 6 a.m.

Son Donnie recalls how he often went to bed on a rollaway in the back of the café before his parents carried him across the parking lot to the house, “I don’t know how they did it.”

“The café seated about 40 and we would fill it up twice on Sunday.  People were always waiting.  Reverend Clements (Exeter’s United Methodist Minister) was always coming in to do the dishes on Sunday,” Herb recalled.  They kept the café open for 24 years.

When Mason turned 62 he turned the filing station over to his son Dale and went to work for a local farmer, “He said I was the best hired man he ever had.”

Over the years he worked for many local farmers and various trucking companies.  Threaded through his conversation were memories of cars and powerful engines.  Engines and trucking were the core of his life.  If he couldn’t be out working the land then he wanted some grease on his hands.  Son Donnie still relies on his Dad to help solve some of his mechanical dilemmas, “Don’t let his age fool you, he can still tell you how to fix almost every vehicle he worked on.”

These days Mason lives in his home with son Donnie.  Daughter Trudy visits often along with lots of his grandkids and great-grandkids.