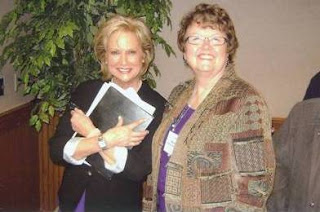 The GFWC Nebraska Federation of Women's Clubs 117th annual Convention was held April 18 - 20, 2013, at the Quality Inn in Grand Island.  GFWC Exeter delegates were Elaine Oldehoeft and Bonnie Cudaback.  NFWC Pat Gage of Aurora presided at the three-day convention.
On Thursday night, Sharon Randall, popular columnist in several newspapers in Nebraska, and throughout the country, gave a dynamic address.  In a packed room of women, she described herself as a "college dropout" and "professional liar".  She was humorous, and also delivered an inspirational address, telling the crowd of the five choices we have in life.  She got a standing ovation when ending her presentation.
Speakers on Friday were J. T. Elbracht, originally from Howells NE,  who talked about the WaterisLife program. WaterisLife's mission is to provide both short-term temporary and long-term sustainable water solutions in developing countries.  GFWC Woman's Clubs endorses this program by donating money toward buying filtered straws for $10 each for people in these countries. The straws last for approximately one year and provide a short-term solution for the water crisis. J. T. has been on many mission trips as a volunteer and photographer with the organization.
Andrea Riley of Lincoln spoke on the Shot@Life program.  This program provides shots to developing countries.  She stated pneumonia is the largest killer of five-year old children, and every twenty seconds a child dies of a vaccine-preventable disease.  The Nebraska woman's clubs also endorse this program.
Reports on the many projects and programs that the clubs do, were presented throughout the convention.  Our club was recognized in the Home Life category for the pumpkin painting at the Exeter Care Center and our participation in "Relay for Life".  Also in the International Outreach program held jointly with the Fairmont club, for the Heifer International program; and the Advocates for Children projects which included contributing to the Backpack Program, Heart Goodie Bags for the Children's Hospital in Omaha, and YRTC in Geneva.
CeCe Murphy, a second grader at E-M Public School was announced as a "Postcard from Nebraska" winner.
In the Youth Division of the Creative Writing program, Clint Oldehoeft, fourth grader at Exeter-Milligan Public School, was a First Place winner with his Short Story entitled "Tom and Erick".
Arts, crafts and scrapbooks were judged and displayed.  Exeter-Milligan School art results were:  Peyton Brandt, Best of Show for the tractor he built of nuts, bolts, nails, etc.; Blue ribbons: Becka Krupicka, Trystan Brandt, and Jordyn Brandt; and Red ribbon, Toni Bossaller.  Agnes Loukota received a blue ribbon and a red on her quilts.   The Exeter scrapbook received a blue ribbon.
The Exeter club took 36 pounds of poptabs, which is the equivalent of 54,000.  They go to the Ronald McDonald House in Omaha.  The Nebraska Woman's Clubs have donated 10 million poptabs since the induction of this program.  These pay for the electric bill of the house for one year.  Our club appreciates everyone  who have contributed to this.
The 2014 State Convention will be held in Omaha on April 10 - 12.
Bonnie Cudaback
News Reporter
Posted by Leesa Bartu at 7:30 AM