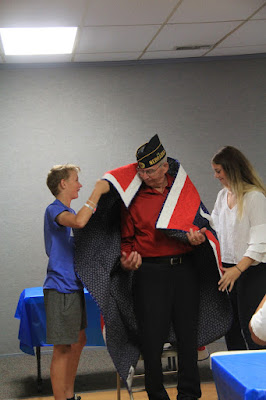 Ralph “Butch” Jansen was wrapped in the Quilt of Valor by his grandchildren, Jacob and Payton Ruhl.

Three US Army veterans were honored with a Quilt of Valor during a ceremony held Sunday, September 15 at the Exeter American Legion Home. Jack Underwood, Ralph “Butch” Jansen and Norman Anton each received Quilts of Valor at the program.

Roberts created a non-profit foundation to guide the project.  Since 2003 over 228,000 quilts have been awarded to those who have served.

Two of the quilts awarded were made by Carol Harris, an Exeter native who now lives in North Carolina. The third quilt was made by Pat Becker, a member of the Exeter Auxiliary QOV committee.

Becker gave a brief history of each of the honorees military service before the quilts were presented.  A light supper was served after the honorees were congratulated and saluted by veterans in attendance. 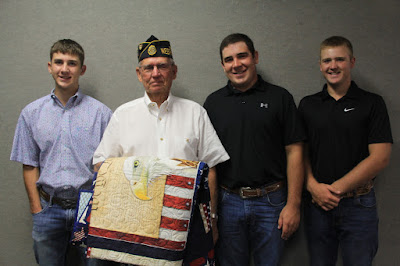 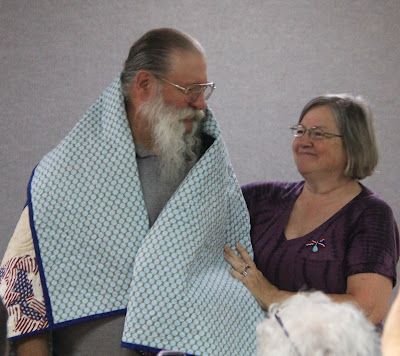 Katrina Anton wrapped a Quilt of Valor around her husband Norm Anton during the ceremony September 15th in Exeter.

Jack Underwood joined the Army Reserves in 1964.  He was sworn in by Don Freeman at the York Foundry and assigned to the 295th Ordinance Company which had a platoon in York, one in Grand Island and two in Hastings.

In April of 1968, Underwood was called to active duty and sent to Fort Carson, Colo. for further training.

Underwood was chosen as a non-commissioned officer and was sent to the Red Stone Arsenal in Huntsville, Ala. for eight weeks of training to learn to handle ammunition and nerve gas.

He had married his wife Linda, in 1966, and she was able to join him in Alabama.

In October of 1968 Underwood returned to Colorado and departed from there to Vietnam with his company.  He was based at Chu Lai and the York platoon he was a part of was divided into two detachments: one to Hill 63 and the other to Dūc Pho.

Underwood was assigned as the NCO at the Ammo Dump at Dūc Pho and was promoted to Staff Sargent.  In October of 1969, the 295th Ordnance Company returned home and most were released from active duty.

Underwood was able to join a large majority of the 295th Ordnance Company in celebrating a 50th anniversary of their homecoming in August of 2019 at a gathering in Grand Island.

Underwood has been a very active member of the Exeter American Legion Post 218 for over 50 years.

Ralph “Butch” Jansen served in the U. S. Army from June 14, 1967 to June 13, 1969.  He went to basic training at Fort Polk, Louisiana and did AIT training as a medic at Fort Sam Houston, Texas.  Also trained at Brooke General Hospital near San Antonio, TX.

After AIT Jansen went home for Thanksgiving of 1967 before heading to Fort Dix, New Jersey for a week before being sent to Rhein Mein Air Force Base in West Germany.  Once they arrived on the base they loaded a train to Augsburg Germany with their final destination at a World War II German base called Gablingen Kaserne which the GI’s named the sheep farm because of all the sheep grazing in open areas.

Jansen was in the medic platoon, headquarters company, 1st Batallion, 70th Armor, 24th Infantry Division and went to training areas including Grafenveer and Hohenfels.  Although the Vietnam War was the predominant conflict, Jansen noted that the Cold War was also being fought, “The United States and the Eastern Block countries were constantly flexing their muscles.”

Jansen’s primary job as a medic was typing reports and documents.  He recalled the only medical emergency he attended “was when someone smashed their finger in the lid of a tank.”

After serving for a year in Germany the entire Battalion was moved to Fort Riley, Kansas. Jansen explained, “We weren’t at Fort Riley but for about three months when we all went back to Germany for training. We were there to show them (the communists) that we would be able to move a certain number of troops into the area within a certain time frame if it was needed.”

While his Battalion was at Fort Riley they participated in training to handle college protestors and civil rights marchers.  His feelings were mixed on this since, “one of our favorite hangouts was Aggieville near the Kansas State campus.”

Also, while in Fort Riley, Jansen was “volunteered” as a body escort.  He escorted a KIA (killed in action) soldier from San Francisco to Mountain Lake, Minn.  He said, “It didn’t get uncomfortable until I met the family.  They only allowed one military person at the funeral—me!”

The night of the funeral Jansen was invited into their home for supper.  They were a Mennonite farm family who spoke mostly German in their house.

Jansen was also “volunteered” to serve during the funeral procession of General and former President Dwight D. Eisenhower.  He and others stationed at Fort Riley were transported to the hometown of Eisenhower, Abilene, Kansas, where they were stationed ten feet apart on both sides of the route where Ike’s body would be transported.  They were on duty for 24 hours in advance of the procession and stood for one hour on and two hours off.  They were replaced every three hours and slept on an Army cot at the local VFW.

When the procession went by he was not allowed to look at the street but was looking at a tree.
Jansen was discharged on Friday the 13th of June 1969 and married his wife Barb exactly one year later.  “I will never forget that date!”

Currently Jansen serves on the Fillmore County Veteran Advisory Council and has been a very active member of the Exeter American Legion for over 50 years.

Norman Anton had just finished a year at trade school in Omaha where he was learning to be an auto mechanic when his dad asked him what he was going to do about the service.

Anton checked with the selective service board and found that he was third in line for the draft.  One month later he received a letter, “Greetings from the President of the United States. You are hereby inducted into the Armed Forces of the United States of America.”

One month later, on July 19, 1966 Anton and another Exeterite Larry Kittinger were transported by Greyhound bus to Omaha for their induction.  From there he went to Fort Bliss, TX for basic training.  He was allowed a two week leave prior to AIT training in Fort Huachuca, Ariz.  He was classified as a 63B20, a wheeled vehicle mechanic.

On May 10, 1966 he left Arizona for Fort Lewis, Wash. prior to leaving for Korea.  In Korea he was assigned to the motor pool in an aviation company.  He obtained the rank of E-4 Specialist 4th Class and was a member of Company B, 55th Maintenance Battalion which was part of the 8th Army.

While Anton was station in Korea he recalls that the USS Pueblo was attacked and captured by North Korea.  Also a North Korean 12-man commando team infiltrated to assassinate the South Korean president.

Anton was honorably discharged on May 1, 1968 at Fort Lewis, Wash.  He was awarded the M-14 rifle badge, the National Defense Medal, Good Conduct medal, Korean defense medal and a Unit Citation for preparing and shipping 25 H-23 helicopters for service in Vietnam.

Anton has been a member of the Exeter American Legion Post 218 for 51 years and also is a member of VFW post in Lincoln where he has served as Post Commander several times.