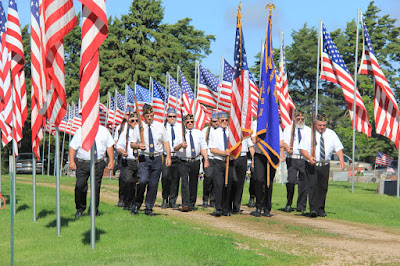 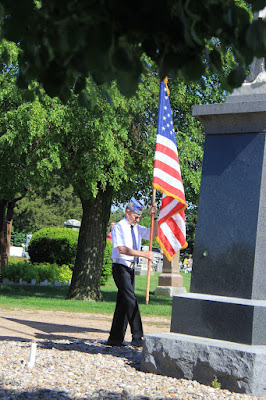 Sons of the Legion member John Tauriella posts the American flag during the Memorial Day program.

The Exeter Cemetery was stunning with flags flying proudly on their posts and graves decorated for the day of remembrance. The Sons of the Legion and volunteers from the community put up the avenue of flags and decorated the graves of veterans with small flags on Friday.
In this spectacular setting it was effortless to focus on the importance of the Memorial Day holiday.  After the presentation of the flag, master of ceremonies, Ralph “Butch” Jansen indicated that the Exeter-Milligan band would play “The Star Spangled Banner.”
Monsignor Daniel Seiker gave the invocation before Exeter-Milligan graduate Joel Klemm read the Gettysburg Address.
Jansen reminded the audience of the location of photos of the men from Exeter who gave their lives in service to their country.  He read the names of each of these fallen heroes.
The Exeter-Milligan band also performed America and later in the service played “A Salute to Freedom.”  Mitchell Manning read “In Flander’s Field” before the speaker, Vietnam Veteran Tim Wilbeck was introduced.
Wilbeck noted that a thunderstorm the night before had snapped three flagpoles and bent several others but, “Our flag, though tattered, still flies high.”
He also reminded those gathered that, “Sacrifice is meaningless without remembrance.”
Wilbeck spoke about North Ogden, Utah Mayor Brent Taylor who wrote on facebook just prior to the election in 2016, “We must all remember that we have more as Americans that unites us than divides us.”
He went on to tell about Taylor, a member of the National Guard and father of seven, who chose to serve in the military and was killed during an insider attack in Afghanistan where he was serving.
Wilbeck emphasized that “politics are irrelevant to a family that hears ,’we regret to inform you.’  They all died so we can have the things we cherish, freedom.”
He reminded the audience to “honor their sacrifice by caring for their family members.”
After he spoke he joined the Legion members in a 21 gun salute to the dead.  Jansen dismissed the audience after inviting them to share fellowship and coffee at the Legion. 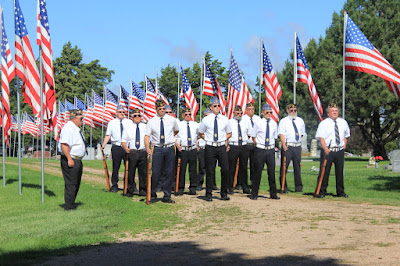 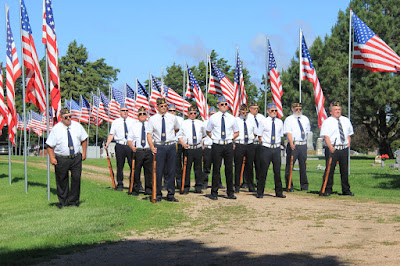 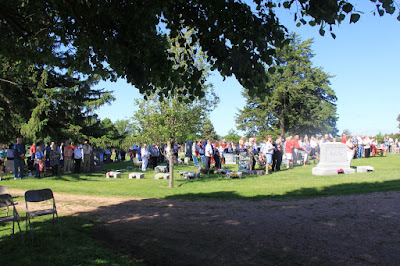 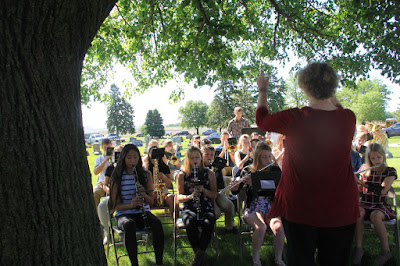 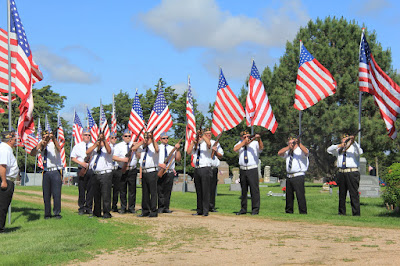 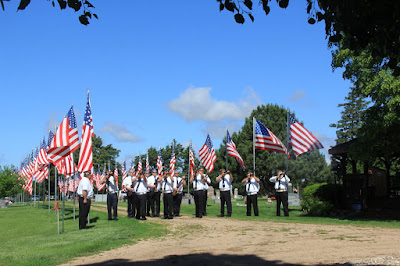 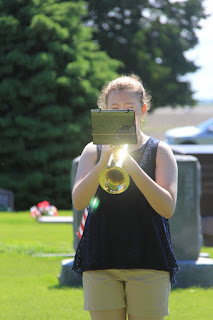