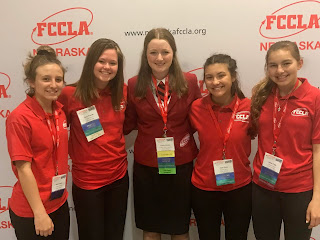 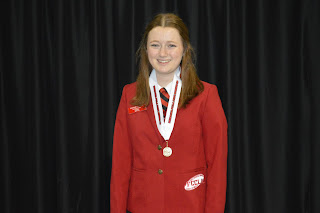 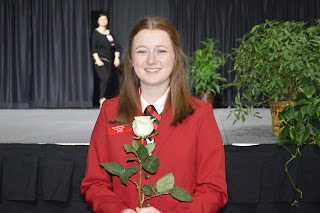 Exeter-Milligan FCCLA Officers attended Nebraska FCCLA State Leadership Conference in Lincoln on April 7-9th.  Approximately 1,200 FCCLA members from across the state of Nebraska were in attendance.  The conference opened with State Officer Candidates introducing themselves.  Caitlin Murphy was one of the State Officer Candidates.  The evening keynote speaker was Logan Weber.

Logan Weber shared that even organizations have "Goliaths", barriers, challenges and obstacles blocking the path to their goals.  Rather than running from them in fear, or behaving as they don't exist, the most successful among us have used one secret to rise above every challenge and it is available to all of us, to shift our vision from the obstacles to the rewards awaiting us in the future.
EMHS FCCLA officers were able to tour Hudl and Memorial Stadium.  District Officer meetings were held, along with networking with FCCLA members from across the state of Nebraska.  EMHS Officers attending were:  President: Caitlin Murphy, Vice President:  Daisy Kanode, Sec/Treasurer: Anna Sluka, PR/Historian:  Kayla Geiger and District Officer:  Jaiden Papik.

Caitlin Murphy competed in STAR (Students Taking Action with Recognition) with a Leadership Project entitled " Learning to Lead", which focus' on using the planning process to create an portfolio to complete a leadership profile and employability skills checklist, competencies inventory analysis and summaries, 3 observers leadership competencies inventory and summaries, writing an admirable leadership summary and developing a leadership plan.  The portfolio also included an outside perspective reflection and leadership reflection.  Caitlin was awarded a gold medal and was NE State Runner Up. She will represent NE FCCLA and EMHS FCCLA at National Leadership Conference in Anaheim, CA. on June 28 - July 4.

Caitlin also was a State Officer Candidate.  Through this process she had a detailed application, interview with State Department representative and FCCLA Board of Directors members, competed a FCCLA knowledge exam, prepared an introduction for the opening ceremony and was observed in leadership and team building activities with other candidates. The last component was a 3 minute speech on a given topic in front of the voting delegates and advisers.  Caitlin was elected NE FCCLA Vice-President of Competitive Events and will represent NE FCCLA at National Leadership Conference in Anaheim, CA.  along with 7 other elected officers.  Congratulations Caitlin.