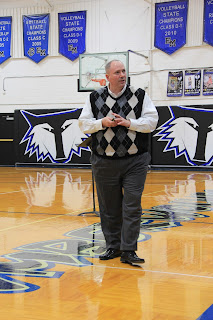 You could have heard a pin drop in the Exeter-Milligan Gym on Thursday March 29th as Ralston School Superintendent Dr. Mark Adler shared the story of their son, Reid’s, suicide.
He explained how their son had taken an inappropriate picture of himself and shared it with a female peer.  She then threatened to release the picture on social media.
Adler explained that Reid did reach out to him and his wife and shared that he felt like taking his own life but never shared his secret with them.  The family immediately sought counseling and felt that they were going in a positive direction.
Unfortunately, the girl did share the picture on social media and that one action caused Reid to take his own life very unexpectedly.
Adler and his wife, Joni, have made it their goal to do what they can to make a difference for another family, “I’m not going to let any of our (Ralston) kids get bullied.  If I have one message I could share with a student, it is don’t leave parents out. What has been done cannot be changed.  What is ahead can be defined.”
Joni also spoke to the student body.  “I believe we can learn something from everything.  First, don’t take inappropriate pictures of yourself.  Stop the cycle of hate.  I don’t have a magic wand to wipe away the bullying.”
She explained that bullying exists outside of school, in communities, workplaces and even churches.
Her goal, “Is to arm you with self-worth.  I don’t understand why we give other people the power over our self-worth.”
She showed a crisp $20 bill and asked the student body if it they wanted the money and then crumpled it and asked if they still wanted it.
“The condition it is in has nothing to do with the money.  The $20 is worth something.  The same with you.  It doesn’t matter what you have done.  You still have great worth.  If you are the bully you can change.  Your self-worth comes from your gifts, your talents.”
She explained that their son Reid had them fully convinced that he was suicidal because he didn't measure up to his older sister instead of the confessing the mistake he had made.  She emphasized, “There is never a mistake you should have to pay for with the price of your life.”
And along with making mistakes, forgiveness needs to come into play.  Joni explained that forgiveness is sometimes the hardest thing to do.  She encouraged the student body to be kind to themselves and forgive those who have hurt them.
She shared how she has forgiven the girl who posted the picture of Reid on social media.
The Adler’s shared the Nebraska Department of Health and Human Services statistics that in 2014 in youth 10 – 14 suicide was the leading cause of death in Nebraska.  Among 15-25 year olds, it was the second leading cause of death.
Joni shared that, “Suicide does not end the pain, it just transfers the pain to those who love you the most.”
“If suicide is ever something you have considered I have one word for you, don’t.”
She reminded the students that no matter how overwhelming the present situation is, in ten years it won’t matter.
One of the most important aspects of their presentation was to encourage the students to confide in an adult.  Dr. Adler explained that despite texting over ten of his close friends that fateful night sharing his fears, none of Reid’s friends contacted an adult.
Their plea to the 10,000 students they have spoken to is to be kind.  “I’m convinced if the girl had used a bit of kindness, it would have gone a long way.”
Dr. Adler struggled with his emotions at different points in the talk especially when he talked about the special times he and Reid shared and now the special times he is missing with him now.  He would be a junior at Ralston High School this year. “The guy that should be leading the team isn't there.”
He encouraged the students to embrace two things, leadership and courage.  “Someone is looking up to you no matter where you are at.  What kind of leadership are you portraying?”
The courage come is as he reminded them that if they hear something that they feel is bullying they need to get it stopped and if they don’t do anything, they are part of the problem.
The Adler’s left bracelets with the motto #be kind for all of the Exeter-Milligan 7 – 12th graders.
The Adler’s speak to students for no charge.  They ask schools to make a donation toward a scholarship fund they have set up in Reid’s name to keep his memory alive.
Exeter-Milligan principal Laura Kroll first heard Dr. Adler speak at an Administrator Day in Kearney in 2016.
“I was fortunate enough to get into their session.  Their story was so impactful that I knew at the conclusion of their presentation that I wanted our students to hear their message.”
Kroll continued, “I hope that it was just as impactful for our kids as it was for me when I heard them speak for the first time.  I hope Dr. Adler and Mrs. Adler’s words and their message resonates with our kids far into the future.”