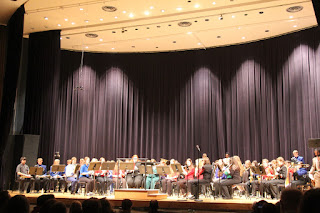 Exeter-Milligan had 23 students selected for Class D All State Band which was held in Kearney this year.

There were Timberwolves participating in each of the three band performances which included a Jazz band, Symphonic band and a Wind ensemble.

The students spent all day Saturday learning the music and practicing with their groups.  Saturday evening was a performance at UNK that was open to the public.  Shickley Public School teacher Mr. Joshua Harris was the master of ceremony for the evening.  He noted the importance of the All State Band experience for the students, “This creates an opportunity we cannot create at home.  You will see as the night goes on, the band gets bigger.  Bigger than the schools most of the students attend.”

The Jazz band led the group with Exeter-Milligan junior, Hannah Horne on the baritone saxophone.  They performed five numbers and Horne was presented a medal.

The Symphonic band was the largest and they were the second group to perform.  Included in this group were Macy Due on bass clarinet, Kayla Geiger and Anna Sluka on alto sax, Mitchell Manning and Theron Odvody on trumpet, Josie Kresak on French horn, Katie Skinner, Joey Bartu, Eli Johnson and Spencer Pribyl on trombone, Joel Klemm on tuba and Peytan Brandt on percussion.

The band performed along a water theme including a moving rendition of “On a Hymnsong of Philip Bliss” which included the hymn “It is well.”

The final group of the evening was the Wind Ensemble.  They performed a lively group of songs leading off with “Normandy Beach” along with several movements of “Simple Gifts.”

Chosen for the wind ensemble from Exeter-Milligan were Ella Wilkins on flute, Ashley Benorden on clarinet, Jacy Schlueter on bass clarinet,  Trystan Brandt and Trever Zelenka on trumpet, Caitlin Murphy, Haylee Sheffield, and Samantha Horne on French horn, Nick Hayek and Patrick Murphy on trombone.  Benorden had a clarinet solo during the performance and many of the students received medals. 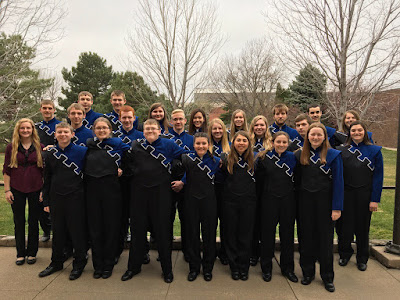 All the Exeter-Milligan students who were chosen for All-State Band. 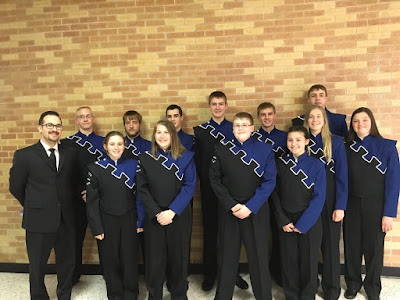 Exeter-Milligan students who participated in Symphonic Band with the director. 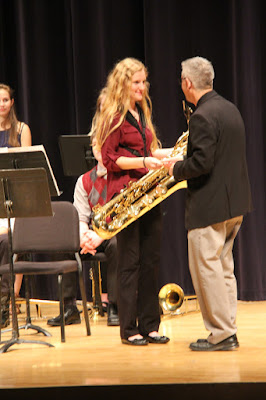 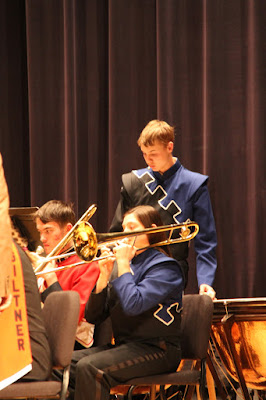 Katie Skinner (on trombone) and Peytan Brandt playing in the Symphonic Band at Class D All State Band. 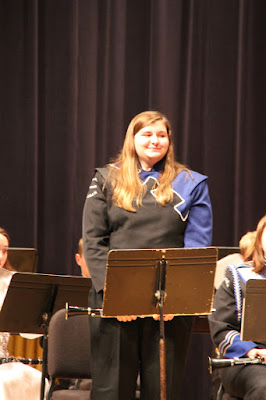 Ashley Benorden is recognized for her solo during the wind ensemble’s performance at Class D All State Band.
Posted by Leesa Bartu at 7:30 AM