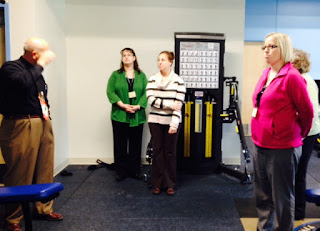 FILLMORE COUNTY - The Odegeo…Leadership for Fillmore County class attended an “ABC’s of Education” session December 20, 2016.
The day began with the members meeting at the Fillmore Central High School.  Mark Norvell, Superintendent at the Fillmore Central Schools, gave the class on overview of the Fillmore Central School Systems. Jim Rose, Fillmore Central Principal, then took the class on a tour of the High
School.  The class enjoyed a morning break compliments of the Fillmore Central Schools.
Next the class traveled to the Fillmore Central Elementary School where Michele Rayburn the SUCCESS administrator took the class on a tour of the Elementary School.  She told about programs for students with special needs.  Following the tour and discussions, the class traveled to Fairmont where Principal, Steve Adkisson, gave the class a tour of the Fillmore Central Middle School.
Traveling to Milligan the class toured and heard about the 3rd through 6th grade classes from Exeter-Milligan Superintendent Paul Sheffield. Then the group traveled to the Exeter site and enjoyed lunch compliments of the Exeter-Milligan Public Schools. Paul Sheffield, Superintendent gave a tour of school and explained about the updates and improvements that had been done on the school facility and how it was funded.  The fitness room at the school is available to the public as well as the students. The  TYKE program through ESU 6 is now available at the Exeter site.
The next stop was Shickley Public school where Superintendent, Bryce Jorgenson and Principal Derek Epperson talked about the Early Child Learning Center and the updates done on the building during the past summer. The class enjoyed cookies and drinks compliments of the Shickley Public School.
The last stop of the day was at Head Start facility in Geneva and how they have programs to  help parents and children from  pre-birth through pre-school.
During this stop Brandy VanDeWalle did a leadership skills session about asking about asking questions and responding to questions.
The January session of the Odegeo class will focus on Health and Human Services. Person interested in learning more about Odegeo…leadership for Fillmore County may contact the Development Corporation at 759-4910,  email lentfer.fcdc@genevamail.com or go to www.fillmorecountydevelopment.org.