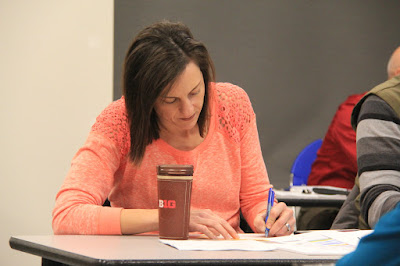 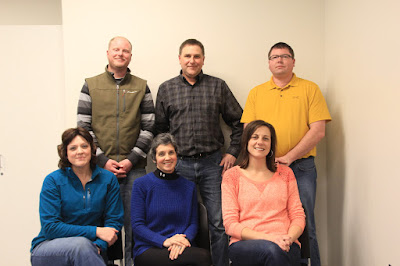 The Exeter-Milligan School Board met Wednesday night in the new community classroom on campus with an audience that included most of the junior class, school board members and administration from two other school districts along with parents and Exeter-Milligan faculty members.

Two newly elected school board members were installed on the board.  Kendra Oldehoeft, of Exeter and Eric Milton of Milligan were welcomed to the board.  After the oath of office was administered for the entire board, new officers were elected. Sharon Kuska retained the position of president of the school board and Tim Pribyl was re-elected as vice president of the school board. Adam Erdkamp was nominated and elected as secretary with  Kendra Jansky confirmed as treasurer.

All board members completed a conflict of interest declaration before Jansky gave the treasurer’s report and the board approved the minutes from the December meeting.

President Kuska introduced the agenda item in regards to a decision on the future of Exeter-Milligan volleyball and opened it up for audience comment.

Fillmore Central School Board president Randy Kleinschmidt spoke briefly concurring with Lovegrove, “Our door is open.  If you are open to do something for volleyball or not.”

Audience member and parent Cantrell Harrison asked the board if Darcy  White would be coaching next year and President Kuska directed the question to Dean Filipi, Exeter-Milligan Athletic Director who responded that she would be coaching as far as he knew.

Milton asked Exeter-Milligan Superintendent Paul Sheffield if there had been any comments from the students.  Sheffield responded that “If they could stay on their own they would like to do that.”
Kuska asked volleyball parent Jane Beethe for her opinion on the situation.  “I think it puts the students in a tough position.  They just want to play.  My opinion is to stay E-M and recruit."

Filipi commented, “My take on the situation is if we think we have enough players to play then I think the feeling is that we try to go one more year.  As far as the Athletic Director part of it the longer we wait for what we want to do it was affect scheduling as to who we want to go with.  Schools make decisions late but those are some other considerations.”

Coach Darcy White added her two cents to the conversation pointing out that it is not just the volleyball program that is suffering.  “We had 80 percent of the girls participating in three fall sports while only 30 percent are participating in winter with just one sport.”

“It’s not just a volleyball issue – you can’t have teams with five volleyball players and six basketball players.  Our numbers are not getting better. . .I don’t know what the projection is.  I am not going to go out and beg girls to play volleyball because those aren’t the girls I want to play for me."

Board Member Kendra Oldehoeft added that even if you are only losing three girls that is a 15% drop.

Board Member Kendra Jansky asked White what her thoughts were on students not participating in basketball.

White responded, “I think it’s a trend in society not just at E-M but you will have to ask the kids.”

David Kraus, the Friend Public School superintendent offered a coop with his district for volleyball. He noted that the coop Friend has with Exeter-Milligan for junior high football has been successful and the district is “Open to a decision.  We have a strong interest in combining for volleyball.”

Kuska thanked the neighboring school representatives for attending the meeting.

Board member Adam Erdkamp saw the situation as a two question situation, “We need to look at what we are doing for next year and the future.  The numbers don’t lie. I would hate for us to make a quick decision to change things up without more information.”

Audience member and parent Jill Oldehoeft asked why the board wasn’t looking at more than just volleyball.

Kuska responded, “with respect to the timing, the issue is volleyball.  It’s not just one sport we need to think about and that is one of the reasons I wanted Dean(Filipi) to come tonight.  Maybe provide a suggestion or shed some light for us.”

Filipi responded that the board could go either way, keep the team or choose to coop.  “Convenience wise it’s nice to know ahead of time. We would like to give other towns a chance to do that.  If that means we are hampering ourselves we have to look out for ourselves.”

Eric Milton added, “ I think you have to make this plan in the next three or four months.  This allows the public to know what the plan is.  We need to revisit this conversation sooner than in another year.”

Kuska emphasized that the board needed to make a decision during the meeting and Erdkamp made a motion to continue on as Exeter-Milligan for the 2017 volleyball season.  Vice-President Tim Pribyl seconded the motion.

Coach White added that she thought there should be an exception that if there were less than 6 girls they would forfeit the season. She expressed her concern that there would not be enough.

Milton asked what would be the options if they have to forfeit and Sheffield explained that the team members would not have the option to go anywhere else to play.

Assistant Coach Laura Kroll spoke in support of keeping the team at Exeter-Milligan.  “I want the girls to know that we believe in them, we aren’t giving up on them.  When you talk about a program dissolving it’s an emotional thing for me.  I will put our five girls up against anything.  One thing I know for certain is that we have built a culture here. In the last 10 years we have gone to state 8 times.  It’s been 5 years since we were able to have a 6 on 6 scrimmage.  If the girls are willing to give it all they can. I will give it all I can.  I am devoted to this program and Darcy is, but she is more realistic about the numbers.  You aren’t going to find a better coaching staff.  I believe we can make it another year.”

Beethe questioned the need Erdkamp expressed to have more information to make a decision.

Erdkamp responded, “ I am not comfortable in making a decision to end a program. Long term it looks like to me we will have to look for opportunities.”

Superintendent Paul Sheffield commented ,”No matter what decisions is made it is going to be tough.”

Kuska added, “We have to act in the best interest of the girls and the best interest in the set of activities we have at the school.  We are going to make some people happy and others not, but we have to make a decision so we can go forward.”

The board voted 5-1 to retain the volleyball program at Exeter-Milligan with Kendra Oldehoeft voting against retaining the program.

Next on the agenda was a report on recent negotiations with the teachers.  Erdkamp reviewed the highlights of the changes to the agreement.  The salary schedule included additional salary options for the teachers who pursue additional education and certification.

They also offered to allocate $25,000 for faculty members to use to pursue further education on a first come basis starting with the 2018-2019 school year.

Kuska added, “We thought the establishment of an educational fund might be a good incentive for faculty.”

Sheffield commented that the funds would come out of the general fund and he had seen this program run successfully in another Nebraska district.

The board entered executive session to discuss personnel issues.  After returning they passed a motion made to let the superintendent’s contract automatically renew.

Next on the agenda was the option to choose an Energy Service Company .  Sheffield explained that it just allows the board to look at grouping some projects together.

Previously the board had sent out a request to four energy providers asking for their qualifications.  Only Trane responded.

Sheffield emphasized, “This resolution by no means binds the board into anything or paying anything.  We are just looking at utilizing an energy services company.  We would be possibly updating HVAC, lighting, locker rooms and  remodeling bathrooms all under one project.”

The board accepted the resolution to sign a letter of intent with Trane to implement energy and operational savings projects.

Kuska asked the board members to notify her of their preferences for committee positions.

Sheffield gave a brief preview of the legislative session and reported that the state aid check for $42 for the year came.

The board set the next meeting for Feb 15 at 7 p.m. in Milligan.