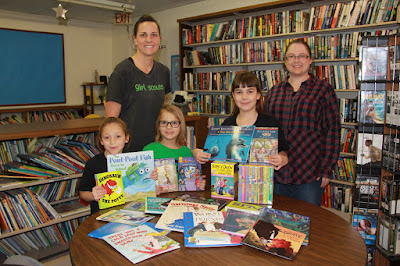 Exeter-Milligan Girl Scout Troop 20703 Brownies front row from the left are Sydney Engert, Aiyden Franssen and Brooklyn Oldehoeft in front of the many books they donated to the Exeter Public Library.  In the back row are Kendra Oldehoeft, left, their leader and Exeter Public Librarian Jessica Votipka.

What can a small group of Girl Scouts accomplish? Quite a lot when they put their mind to it.

Exeter-Milligan Girl Scout Troop 20703 had a plan when they heard about the opportunity for their Brownie group to have a booth at the Exeter Avenue Holiday Sampler in October.

The three girls, along with their mom’s baked and decorated everything from cookies and muffins to donuts that were donated by the Casey’s in Exeter.  They made their space attractive and advertised their objective: buying books for the Exeter Public Library.

During the sale, their leader Kendra Oldehoeft noted, “We had several who donated and didn’t want anything.  They just wanted to help us out.”

The girls donated 44 books to the Exeter Public Library.  The books were special because the girls were able to pick five of their favorites to include at the library.  Oldehoeft contacted Librarian Jessica Votipka to make sure that they didn’t duplicate any books the library already owned.

After the list was whittled down, Oldehoeft found a book about Juliette Lowe, the founder of the Girl Scouts along with other books that emphasize the empowerment of women.  She found books like one which tells about the first woman in space to help inspire girls in our community to expand their horizons.

Troop member Aiyden Franssen chose a book with several different endings that you can choose from.  She liked it because, “You decide the end.”

Another Brownie, Brooklyn Oldehoeft chose a set of Ronald Dahl books because she had read several of his titles including “James and the Giant Peach” and “The BFG” (The Big Friendly Giant).  She noted that she really likes this author and plans to read more of his work along with several other books that she chose.

Sydney Engert, also a Brownie, chose “Dinosaur vs the potty” “because it’s funny and it’s a good book.”