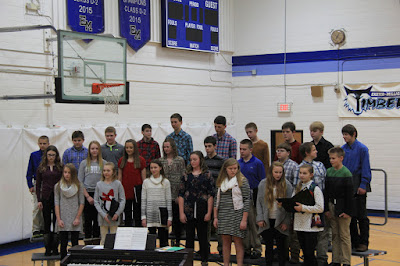 Above - The Exeter-Milligan Junior High Choir performed several holiday tunes at the Christmas Concert Monday, December 19, 2016 .
Below- The high school choir joined the junior high choir for a number doing the holiday concert.  Caitlin Murphy sings a solo during the joined chorus. 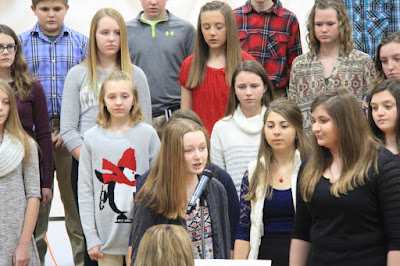 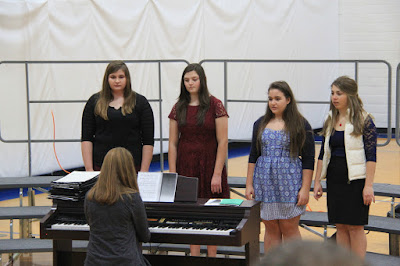 Above – Senior high choir member Caitlin Murphy accompanies the rest of her choir members on “Stille Nacht.”
Below- The Exeter-Milligan jazz band. 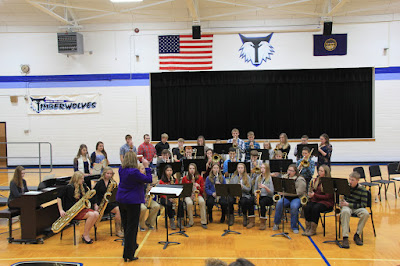 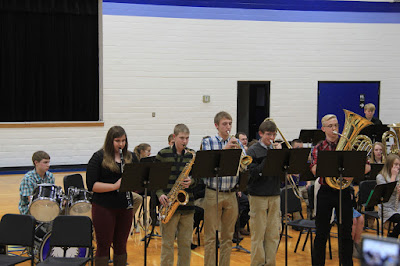 The Exeter Milligan Junior Senior High Christmas concert was held Monday, Dec. 19 in the Exeter Gymnasium under the direction of Mrs. Angie Murphy.

The senior high women’s ensemble sang “Stille Nacht” and were accompanied by one of their members, Caitlin Murphy.  The group performed this number twice with the piano set in two different modes.  Both were beautiful renditions by the ensemble.

The Jazz Band performed “Have Yourself A Merry Little Christmas” with Trystan Brandt performing an excellent trumpet solo.

The band moved on to the classic “Cantique De Noel” and did a beautiful rendition of “Sleigh Ride” before entreating the audience to stand a sing along to one verse of some of their favorite Christmas carols including: “Hark! The Herald Angels Sing,” “O Come, All Ye Faithful,” “Deck The Halls,” “Silent Night,” “The First Noel,” “Joy to the World,” and “We Wish You a Merry Christmas.”
Posted by Leesa Bartu at 8:30 AM