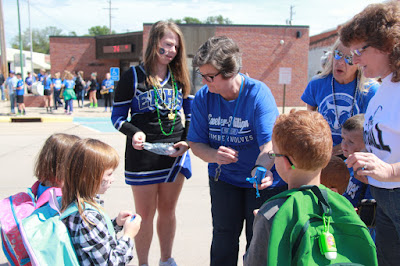 Getting freebies from the cheerleaders was a special bonus for the elementary students. 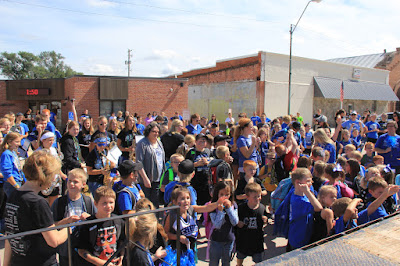 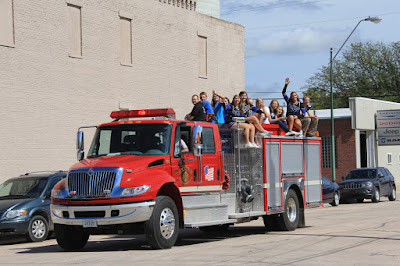 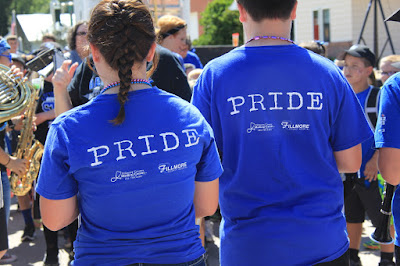 Above and Below - the band playing 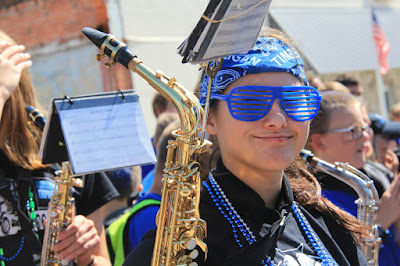 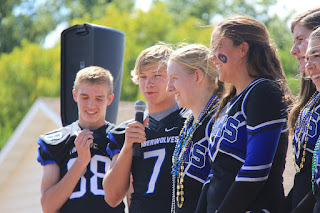 All of the seniors participating in a fall sport were up on the stage during the pep rally.  One senior from each sport spoke about their season.  They are pictured from the left Evan True, Trevor Luzum, Samantha Horne, Sydney Hall,  Ashley Benorden and Haylee Sheffield. Ella Wilkins and Katie Skinner are not pictured. 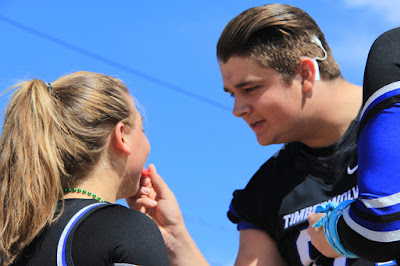 Above - Jos puts the finishing touches on Haylee's make-up.  Below – The senior football players put make-up on the cheerleaders.  Denice Kovanda tallies the votes for the make-up job Jos Cremers did on cheerleader Haylee Sheffield. 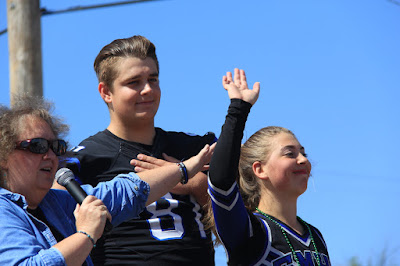 The entire Exeter-Milligan school was downtown in Exeter for the Homecoming pep rally on Friday afternoon.  After a week of "home" related events the students, faculty and entire community had their home team gear on to cheer on the football team.  The seniors arrived in style on top of the fire truck.  The Exeter-Milligan band played and the Homecoming attendants were introduced.  Senior representatives from each sport took the stage (a flatbed semi trailer Horizontal Boring graciously provided) and talked a little bit about their season.  The students from football, volleyball, softball and golf all thanked the fans for their support.
After some more great music from the band and cheering from the cheerleaders it was time for the senior football players to get put to work.  The cheerleaders decided that the senior football players would have a contest to see who could do the best job at putting make up on a cheerleader.  The contest was decided by audience applause.  Trevor put make up on Sydney, Evan had Ashley for a partner and Jos was in charge of Haylee's make up.  The audience chose Trevor and Sydney.
As the pep rally ended the cheerleaders headed to Greg's where the store donated ice cream for each student!
Posted by Leesa Bartu at 9:50 AM