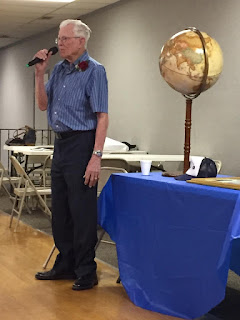 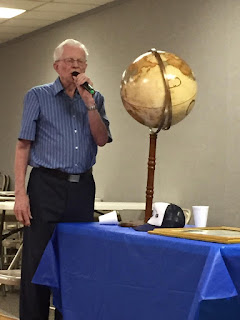 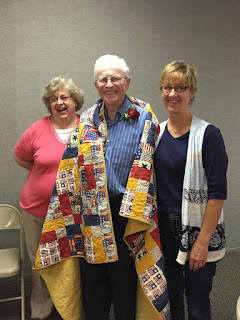 Roy Stubbendick is pictured with his quilt of valor surrounded by Auxiliary members including Kay Due (right) and on the left, Pat Rocole.

At age 95, Mr. Stubbendick has received his 70 year membership pin from the Amercian Legion coming from his active duty from the fall of 1942 to mid-March 1946.

Wearing a red rose boutonniere from his daughters, Roy wanted to tell about growing up near Unadilla, Nebraska and going to country school. His father passed away when Roy was nine years old but his strong willed mother kept the family together and continued to farm.  In 1941 he became engaged but was working away from home and got drafted.  Roy stated, “I didn’t want to walk for the Army so I decided to fly.”

After receiving training at different sites in different states he became a multi-engine pilot for them c-47 airplane.

From Fort Wayne, Ind. Roy flew to southeast Florida then to South America crossing the Amazon River which he described in great deal.  He was amazed at how large it was and called it “amazing.”
They landed in Brazil.  He appreciated having a good navigator assisting the pilots on every flight as he was sent to Africa by way of the northern route which was through India.

Stubbendick’s job was hauling supplies to the American troops.  The couldn’t land the planes so they removed the back door and put cargo in huge bags to push it out the back door. When they could land, they did and found fresh pineapples off of the trees on the hillsides.

After six months they got orders to go to China.  They flew day trips to Shanghai but didn’t always have a navigator so they followed the river to get to their camp.

Unfortunately, sometimes the cargo Stubbendick had to transport were the bodies of dead soldiers so that they could be returned home to the United States.

Near the Taj Mahal in Agra, India, a huge blizzard hit the antenna on the plane and they had to land make camp.  Tigers came down from the hills to their camp.  Another time while sleeping, Stubbendick was aroused from sleeping with the feeling of the presence of something in the tent. He kept a .45 pistol under his pillow which he slowly removed only to discover a cow had been watching him sleep.  He reminded the audience that, “Cows are sacred in India.”

Stubbendick recalled that the C-47 was one of the most reliable planes. Most other planes contributed to the “Trail of Tin” as they tried to cross the Himalayan Mountains.

When the war was over, Stubbendick had to wait four months before receiving his orders to go home.  He parked his plane in Calcutta, India and headed home by ship.  It took three days to get down the river to the ocean and then 31 days to get to the United States.

Stubbendick received a letter of appreciation from the Air Force of China and a “Pair of Wings.”  He was thankful that he had never contracted jungle fever like so many did while serving overseas.

American Legion Auxiliary members Kay Due and Pat Rocole displayed the quilt behind Stubbendick and wrapped him in it at the end of the presentation.  A reception followed the presentation.

Prior to hearing Stubbendick speak, Evan True, the Exeter American Legion representative to Cornhusker Boys State this year spoke to the audience and thanked them for the opportunity to attend the educational event.