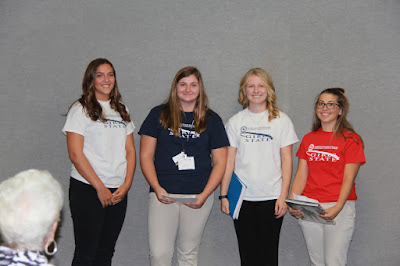 Pictured from the left are Sydney Hall, Ashley Benorden, Samantha Horne and Haylee Sheffield while they spoke about their experiences at Cornhusker Girls State this summer.

On Sunday, September 11, 2016 the William Sullivan American Legion Auxiliary Unit #218 hosted a gathering of community members and members of the Legion family to hear from the Exeter and Milligan Girls State Attendees of the June 5-11, 2016 event.

Ashley Benorden, Sydney Hall, Samantha Horne and Haylee Sheffield reported on their activities in Lincoln on the campus of UNL and around the city, as they had a hands on experience learning about the workings of government, the responsibilities of an informed citizen and the dedication and respect necessary to keep the country free.

The girls campaigned for various political offices or served on councils.  They did community service, made cards for veterans, tray favors, volunteered a the Malone Center, played in the coed band or sang in the coed choir.

While celebrating the 75th anniversary of Girls State they heard from Miss Nebraska, Governor Pete Ricketts and coaches from the University of Nebraska to promote self-confidence, inspire them to be their own leader and the need to vote!

All four girls felt it was a very worthwhile experience and were very thankful to the Auxiliary for sending them.

Haylee Sheffield concluded the program by reading from a published book about the “9-11 Attacks” upon the United States.  All those attending spoke of where they were when they heard about the twin towers and the emotions they felt at that time but some of the attendees were only infants or had not been born yet.  Refreshments were served at the end of the program.