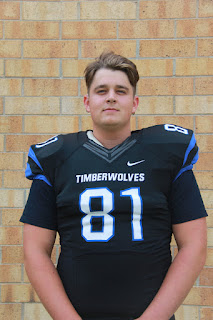 So far he is having a great time doing both.  Cremers played on a club football team where he lives in Germany  and the 285 pounder is starting on the line for the Timberwolves.

Cremers is actually British.  He was born in England where he spent his first few years before his family moved to Korea for a year.  After that, they moved to Germany near Hanover in the town of Meinersen which has a population of about 6,000.

This is the main town in the area which is surrounded by a great deal of agriculture.  His father is a project manager for one of the car companies in Germany and his mother was an engineer before she decided to stay home with Cremer and his younger brother.

This school year Cremers is living with Duane and Cheryl Luzum in Exeter.  The Luzum’s have two grandchildren, Trevor and Hailey who are seniors at Exeter-Milligan.

Cremers is really enjoying the experience of playing football, except for the heat.  In Germany, his club team would only practice twice a week, so after school practice is another adjustment for him.
Food is another one of the aspects of America that Cremers is enjoying, “There is more food and bigger portions.  I really like Mexican food like burritos.”

Along with enjoying the food Cremers is looking to “improve my English, I want to learn the culture.  I want to say I’ve been to America, I’ve learned about the culture and I know how they are.”

Although the year spent at Exeter-Milligan will not count for school in Germany, Cremers believes the year will be an invaluable experience for him, “Coming to American looks good on resumes and applications and shows you are open to experiencing new things.”

His career goal is to be a teacher, a physical therapist or a chiropractor.  Ideally he would combine sports and teaching English.

Beside the food and football, Cremers is enjoying the time with his host family and their extended family, “they have welcomed me in their family and that’s important.”

So far, he has only struggled to adjust to a few things.  Recycling is a much bigger focus in Germany, “We have lots of bins for paper, metal, glass.  I have to remind myself we only have one bin now.”

Transportation and distance is the other adjustment Cremers has had to make.  “In Germany, I can get on a bus to travel anywhere I have to go.  Here you have to get in a car as everything is a distance.”

He added, “Exeter is the perfect place to start little before getting to the big stuff.”