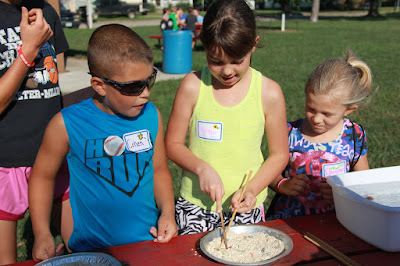 Instead of spending a beautiful day cooped up in the classroom, the Exeter-Milligan second grade class went outside to learn on Friday, September 23rd.

They weren’t alone in their question for knowledge as the Exeter-Milligan 11th and 12th graders from Lori Sliefert’s Biology II class joined them at Gilbert’s Park in Exeter.

Sleifert explained that she gives her Biology II students a rubric and grades them on both the preparation and the execution of their subject.

Weber initially created the units, but invited the high school students to add their own personal "twist" to each center and also develop some new centers.

Weber noted the importance of her students having role models like the high school students.
The students started the day by measuring their shadow, they measured again at 11 a.m. and then right before their day ended.  They learned about why their measurement was shorter at the end of the day.

After measuring shadows the students also made plaster tracks that they can save as Christmas ornaments.

During each session the students rotated between three stations so they were able to get very intensive hands on instruction in each subject.

Some of the stations are physically challenging, as the students learned about how birds eat and mimicked a pelican by trying to scoop up grapes out of water and using chopsticks to pull gummy worms out of oatmeal.

On session of the day the students focused on trees.  They learned about the growth rings on a tree and then made the comparison to their own life, making a drawing of the different stages of growth in their own lives.
In the water cycle session they had a unit on oceans and made rain sticks.  They also made birdfeeders and explored their senses.

After some of the sessions there was time for a little activity and the students enjoyed a game of bat and moth. The bat is “it” in this modified game of Marco Polo and the bat is looking for the moth.  They also play a version of the game where some of the moths have ingested DDT and if the bat gets those moths then it dies.  This helps the students understand how dangerous chemicals can be if not treated properly.

All of the students returned to school just as the day was ending after a great experience on a beautiful day.