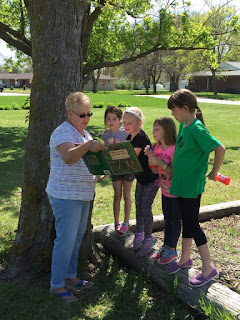 Above  – Joyce Votipka reads the Exeter girl scout troop a story about the three r’s of recycling.  The girls from the left are Kaylie Schlueter, Scout Grummons, Sydney Engert and Brooklyn Oldehoeft.


Exeter Girl Scouts celebrated earth day on Tuesday, April 20th by picking up trash on their walk from school to the recycling trailer.

At the recycling trailer the troop had a presentation from Joyce Votipka who was instrumental in writing the grant for the village to receive the trailer.

Votipka taught the girls how to find the recycling symbol on plastics and along with explaining which items are accepted at the trailer.

Not only did Votipka encourage the girls to recycle, she explained the concept of reusing and reducing and read them a book to emphasize the theory.  To follow that concept the girls made bird feeders using recycled plastic bottles to take home.

Votipka also gave each girl a daylily to plant at home.

When the ground dries out the girls will be planting flowers in the park downtown.

Below – The girl scouts show the bird feeders they made with recycled plastic bottles.  They are pictured from the left Kaylie Schlueter, Scout Grummons, Sydney Engert and Brooklyn Oldehoeft. 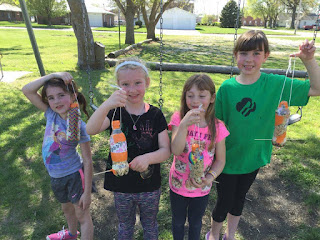