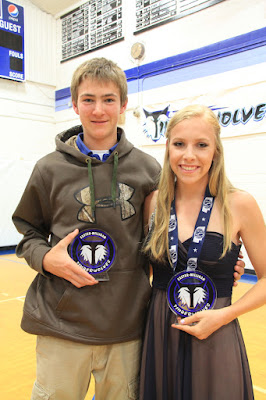 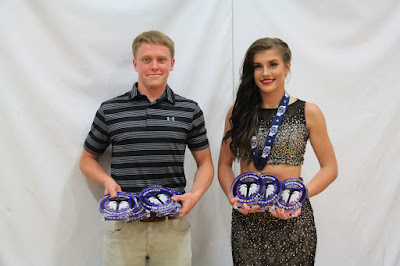 Above -  Exeter-Milligan seniors Sam Zeleny (left) and Marissa Howard with their bling from the athletic banquet.

Below – Sam Zeleny (left), Marissa Howard (middle) and Kelsey Bigelow (right) with some of the hardware their received and the Exeter-Milligan Athletic Banquet. 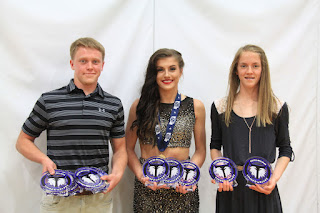 Exeter-Milligan junior and senior high students along with their parents flocked to the Exeter gym on Tuesday, April 26th for the annual Athletic Banquet.

After a meal hosted by the Exeter-Milligan boosters, each of the coaches had the opportunity to talk about their team and their season.  The coaches introduced each member of their teams and noted their post-season recognitions from local press along with the Nebraska School Activities Association academic honors.

Volleyball Coach Darcy White shared about their incredible season and state championship run, noting their entry into the state playoffs via wild card.  She spoke of the psychological challenges facing the team when their first win brought them up against the undefeated Sandhills team.  White brought assistant Coach Laura Kroll up to the podium to share some of the poetry she wrote to inspire the team before each match.

After each junior and senior high team was recognized Coach Brian Murphy and Coach Dean Filipi announced the special awards.  Female golfer of the year was awarded to Brianna Beatham while Kelsey Bigelow received the Lenoard Kassik Memorial Softball player of the year.

In football, Sam Zeleny was named the outstanding senior while Marissa Howard received the Bill Fitzgerald Senior Volleyball trophy.  Howard and Zeleny were back up to the podium to receive the Gary Ruhl outstanding senior basketball player trophies.