Exeter-Milligan honored its country, its military members and veterans in their spring music concert “This is America” on Tuesday, March 15th.

The third and fourth graders started the evening on their boomwhackers playing “The Caisson Song.”  Next to perform were the students who participated in Sing Around Nebraska before the fifth grade band played.

The sixth grade band performed “BB Rock” before all the Kindergarten through sixth graders performed “This is America.”  Ben Bartu, a Boy Scout in Troop 218 led the flag ceremony.  Flags were carried by the Exeter Boy Scouts and Milligan Junior Auxiliary members.  After the pledge, the sixth grade band played “The Star-Spangled Banner” and the crowd was invited to sing along.
The kindergarten, first and second graders waved their flags while they sang, “Oh, I Love America,” and signed along with the song “I Love My Country.”

The third and fourth grade classes sang “All American Me and You” and “Thankful for the U.S.A.” before the fifth grade sang the jazzy tunes, “Fifty Nifty United States,” and “The Heart of America.”
The third through sixth graders performed the very touching song “Those Who Served,” just before the class groups took turns singing each of the military hymns.  They asked the veterans or active service members to stand when their service branch song was performed.  All were recognized with applause.

After honoring the veterans, the kindergarten through second graders sang “Proud of Our Veterans.”
To close the evening Becca Krupicka and Briana Capek sang a solo to begin the song, “God Bless the USA.”

Attendees at the performance were also treated to a patriotic art show by the kindergarten through sixth grade.  Each class did a different art project with a patriotic theme.  Students also brought home colored paper flags to write the name/s of their family members who had served or were currently serving.  They created a giant flag out of the smaller flags to display the many in our community and family who have served our country. 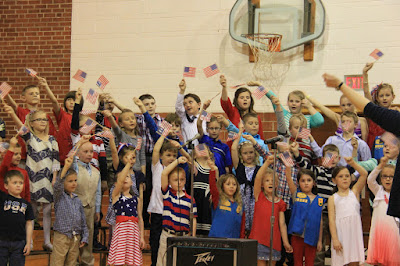 Exeter-Milligan kindergarteners, first and second graders sing about how they love America. 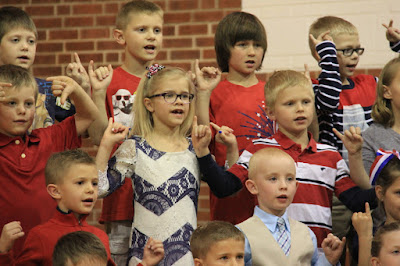 Exeter-Milligan kindergarteners, first and second graders sign along with the song they are singing. 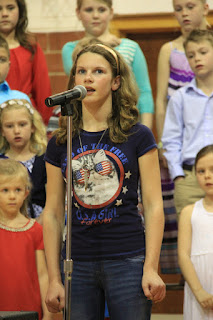