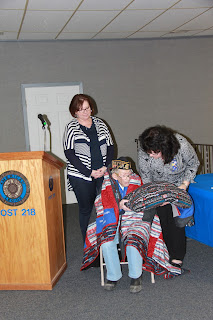 After a social hour Commander Alan Songster welcomed the guests and introduced Legion Auxiliary President Marsha Jorgensen.  Jorgensen gave a brief history of the Auxiliary service and dedication to support the Legion and its mission.

Jorgensen also gave a brief presentation on the purpose of the Quilts of Valor program.  Their mission, according to their website is “to cover service members and veterans touched by war with comforting and healing Quilts of Valor.”

Jorgensen recently pieced a quilt top and Diane Henke assembled and quilted the labor of love.  The ladies presented the Quilt of Valor to World War II veteran, Alva Smith.  They wrapped him in the quilt during the program.  They also presented him with a coordinating pillow.  Smith, in his 90’s, received the Bronze Star during the war.  He served as an airplane mechanic and had a record number of flights in his plane with no return for mechanical failure.

The younger Tauriella presented a memorial donation to the Legion in his father’s name.

Alva Smith also presented a generous donation to the Legion.

Songster closed the meeting and thanked those attending. 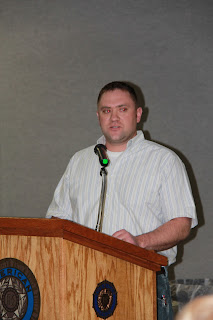 Mitch Schlegelmilch is the first commander of the newly chartered Sons of the American Legion unit in Exeter. 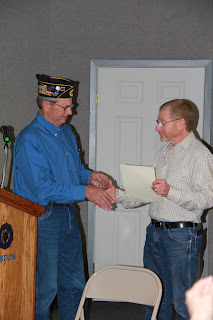