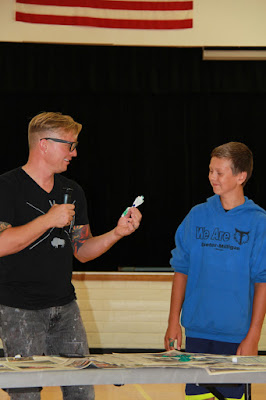 above -During his inspirational message to the Exeter-Milligan 6th through 12th graders, Eric Samuel Timms invited several students to the front and had them race to see who could empty a tube of toothpaste first.  Timms, left, commented that 7th grader Clint Oldehoeft got his tube empty quickly.
below -Timms, who painted during his speech, talked about words of death and painted the graffiti Death but when he turned over the painting the students could see that it actually said Life. 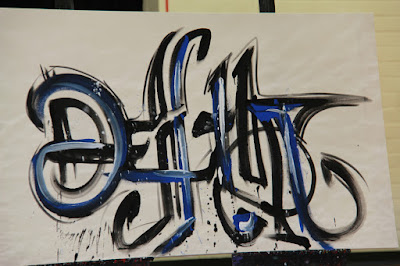 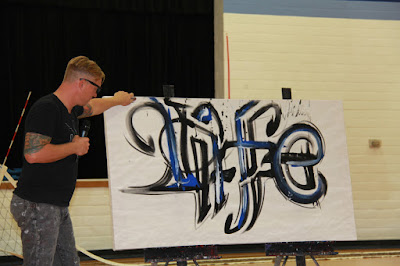 below - Timms began his message to the Exeter-Milligan sixth through twelfth graders but painting Abraham Lincoln and talked about how important Lincoln’s words were for our country.  At the end of the message he asked Kirby Soukup, far left, (whose beard he admired) and Mr. Brian Murphy, Exeter-Milligan history teacher, far right, to join him for a picture with his painting.  Mr. Murphy will hang the original painting in his classroom. 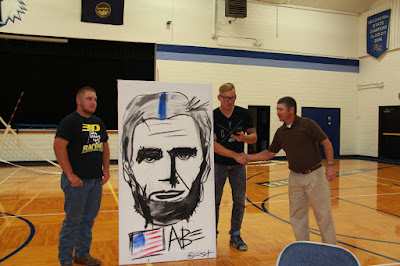 A full cultural experience is really the only way to describe the assembly that Exeter-Milligan sixth through twelfth graders were treated to on Wednesday, August 26.

Eric Samuel Timms an artist from Minnesota painted two original art works for the students during his one hour presentation.  The Fillmore County Coalition sponsored his stop in Exeter.

Timms began painting immediately after he was introduced by FCCLA president Hannah Horne.  With music thumping in the background he started working on a large canvas painting an image that was very unrecognizable.  As he continued to paint the audience was silent still wondering what his brush would produce.  As he flipped over the canvas the image of Abraham Lincoln was immediately evident.

Timms noted about Lincoln, “He was known all over the world for how he changed the world with his words.  He was known for how powerful his words were.  He said we are all equal and what you say to each other and what we say matters.”

Timms asked two audience members to join him in the front and gave each of them a tube of toothpaste.  He asked them to race to empty the tube with the winner to get a $5 bill.

When he called the race a tie, he gave the option of a tie breaking race to get all of the toothpaste back into the tube.  When the students were puzzled he made his point, “Once words are out, just like the toothpaste, they can’t be put back in.”

He then asked the students to think about some words that had been said to them or words they had said or things they had posted on social media and how the words made them feel.

Timms began to paint again, filling the canvas with letters that eventually spelled “Death.”  He mentioned the old rhyme, “Sticks and stones may break my bones but words will never hurt me” and opened up sharing with students, “We all know that’s not true,  it is furthest from the truth.  The words that we choose will always be words of life or death.”

As he turned the “Death” painting over it clearly read as the word “Life” and he encouraged the students to “Speak words of life to each other in person and online and speak words of life to yourself.  You will make this school  a great place for people to come to no matter what their talents.”

Timms also emphasized the importance of “pausing before you post.  Is this a word of life or death to someone?”

In line with this thought, Timms spoke directly to the girls encouraging them, “you don’t all have to be friends but you don’t have to be enemies either.”

Both of the original paintings that Timms created will remain at the Exeter-Milligan school.

Before leaving Timms asked history teacher Brian Murphy if he wanted the Abraham Lincoln painting for his classroom which Murphy gladly accepted and had his picture made with Timms, senior Kirby Soukup (who’s beard Timms admired) and the painting.

Later in the day Timms performed at Fillmore Central High School before an evening presentation for the community at the Rialto Theatre in Geneva.
Posted by Leesa Bartu at 7:30 AM