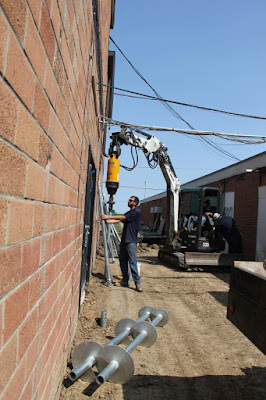 Workers at the Exeter-Milligan School construction site shore up the foundation of the gymnasium in preparation for a new entryway. 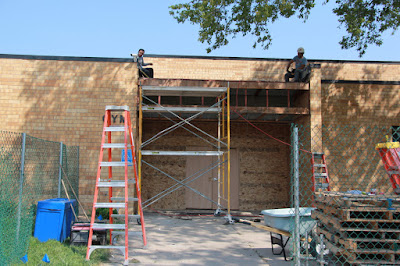 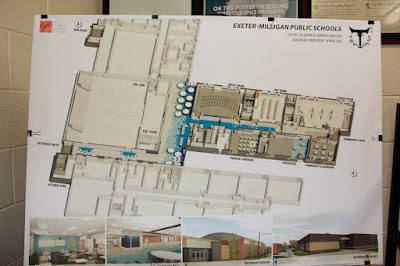 Exeter-Milligan Kindergarteners (along with first and second graders) walk around the construction area every day to art, music and PE.  There are plans to finish a walkway between the two school before the weather gets too cold.  Currently 7 – 12th graders walk around every day for breakfast and lunch. 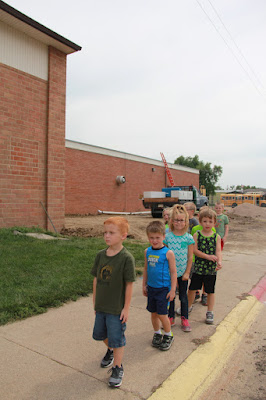 The landscape at the Exeter campus of the Exeter-Milligan school district has drastically changed in the last few weeks.

Construction began in earnest just before the start of school on what will be a 16,000 square foot, $3.25 million dollar building project at the Exeter campus.

What is a little unusual about the project is where the funding will come from. Exeter-Milligan School district formed a Joint Public Agency (JPA) with the village of Exeter to create an addition that would benefit both entities.  In September of 2012, Exeter-Milligan Superintendent Paul Sheffield first approached the village board about the possibility of forming a JPA.

JPA’s allow two government entities to form a joint agency that is able to bond.  One of the most recognized JPA’s in Nebraska is between the City of Lincoln and the University of Nebraska formed to build Pinnacle Bank Arena (PBA) as part of the West Haymarket JPA.

While the project at Exeter-Milligan isn’t on the scale of the West Haymarket, it certainly is groundbreaking.

Over nearly three years the project has morphed through the input of the community from a new gymnasium to a classroom addition that will bring the fine arts department out of the basement of the Exeter-Milligan High School.

Superintendent Paul Sheffield has been working on improving the facilities during his tenure at Exeter-Milligan, “The biggest challenge with the project has been just the commitment to move forward.  Improving the physical site has been a topic of discussion for almost six years.”

In the February 2015 school board meeting the board passed a resolution authorizing the JPA to issue bonds to finance the school addition which would include “a recreational, wellness and multi-purpose facility for the benefit of the District and the Village of Exeter,” according to the resolution.

Exeter-Milligan School Board President Dr. Sharon Kuska remarked, “It’s a win-win situation for both the school and the district.  We’re going to be able to give the school kids a brighter, healthier environment in which to learn and the community will have a new wellness center and community space in which to build even more active lifestyles.  This will reinforce the idea of the school as one of the hubs within the community, making us better able to fulfill our mission statement of working ‘in partnership with parents and community to provide excellent educational programs.’  It allows for an expansion and improvement of the quality of our facilities, benefiting learners of all ages.”

Currently the band, art and foreign language room are housed in the basement of the high school and the new addition promises much improved, larger and better planned spaces for the departments.

Sheffield noted that part of the motivation in removing the students from the basement of the current building is a safety issue. “It is a 100 year old building.  We have had a ceiling come down, we’ve had water and sewer issues.  The band room, along with the rest of the building is not ADA compliant.  This would be the first step in becoming ADA compliant.”


Also included in the new space is a dedicated weight and fitness area which will be open to community members (24 hours/day with limited use during the school day) for a reasonable yearly fee.  Currently, the weight equipment is only accessible to students and has taken over the small gym at the Exeter campus.

Exeter Village Board Chairman Alan Michl recognized the need for the wellness center for the community, “It’s a good thing because both entities felt the need to have some type of a wellness and fitness area. . .Since our last fitness facility closed down people in the community have asked us about having another one.  This was an opportunity to do something together and benefit both entities.”


Part of the new construction will include a community classroom which will be available for rental and a new TYKE classroom.  This addition will join the existing facility to the east of the main gym in Exeter and a new concession area and breezeway will be the blending point for the old and the new.
Michl is looking forward to using the community classroom for fire department training, “Just having a bigger space available will be nice, especially with access to technology.”


The first sign of construction has already affected the school day at the Exeter.  The connecting hallway between the high school and the elementary school and cafeteria was removed to make way for a new visitor’s entrance into the gym and new kitchen storage.  The main entrance to the gym is also getting a makeover during construction.  This phase is scheduled for completion just prior to the start of basketball season.

The rest of the construction is scheduled for completion in July of 2016.

Sheffield noted, “As with any type of remodel, the challenge is going to be keeping everything on track.  The goal is to have the entries ready for basketball season.  And with school in session, all the commotion is a distraction for the kids.  We keep reminding teachers – this will all be worth it, when it’s done!”

Of the $3.25 million total, the community area – including the fitness room, the classroom and the preschool room are expected to cost $1.5 million and the Exeter-Milligan school classroom area is expected to cost $1.25 million. The rest of the costs would be accrued in a new electrical room and the concession and commons area that will connect the addition to the existing building.


The JPA portion of the project will be financed with the $1.5 million in bonds that were issued last March.  Those bonds will be paid over the next four years and will be retired in June 2019.

A projected levy of $0.0447 per $100 assessed will cover the bond payments.  This levy is part of the statute allowable building fund levy of $0.14.

Other pieces of the financing puzzle include $1 million from the building fund (which has a current balance of $1.15 million), $300,000 from the general fund and around $400,000 from the depreciation fund.

Updates to the elementary building in Exeter are included which will allow for the installation of fire sprinklers to the tune of $150,000.  The high school will not have to be retrofitted with sprinklers because its original construction has walls with a higher fire rating.

Clark Enerson was chosen as the architect and Rogge Contractors was awarded the bid with local subcontractors having the opportunity to bid as well.  Currently the construction is focused on dirt work along with reinforcing the south wall of the gym.

The district is looking at three phases of construction.  The first phase already evident in the classroom/community addition, the second phase would be a new gymnasium and the third phase, a new high school.  There is no timeline yet for phase two or three.

Sheffield summed up his thoughts on the impact of the project, ”This addition is an investment in the district and the future students of Exeter-Milligan Public schools.  We want people to see that we do believe in the health of the school and we are preparing for the future.”