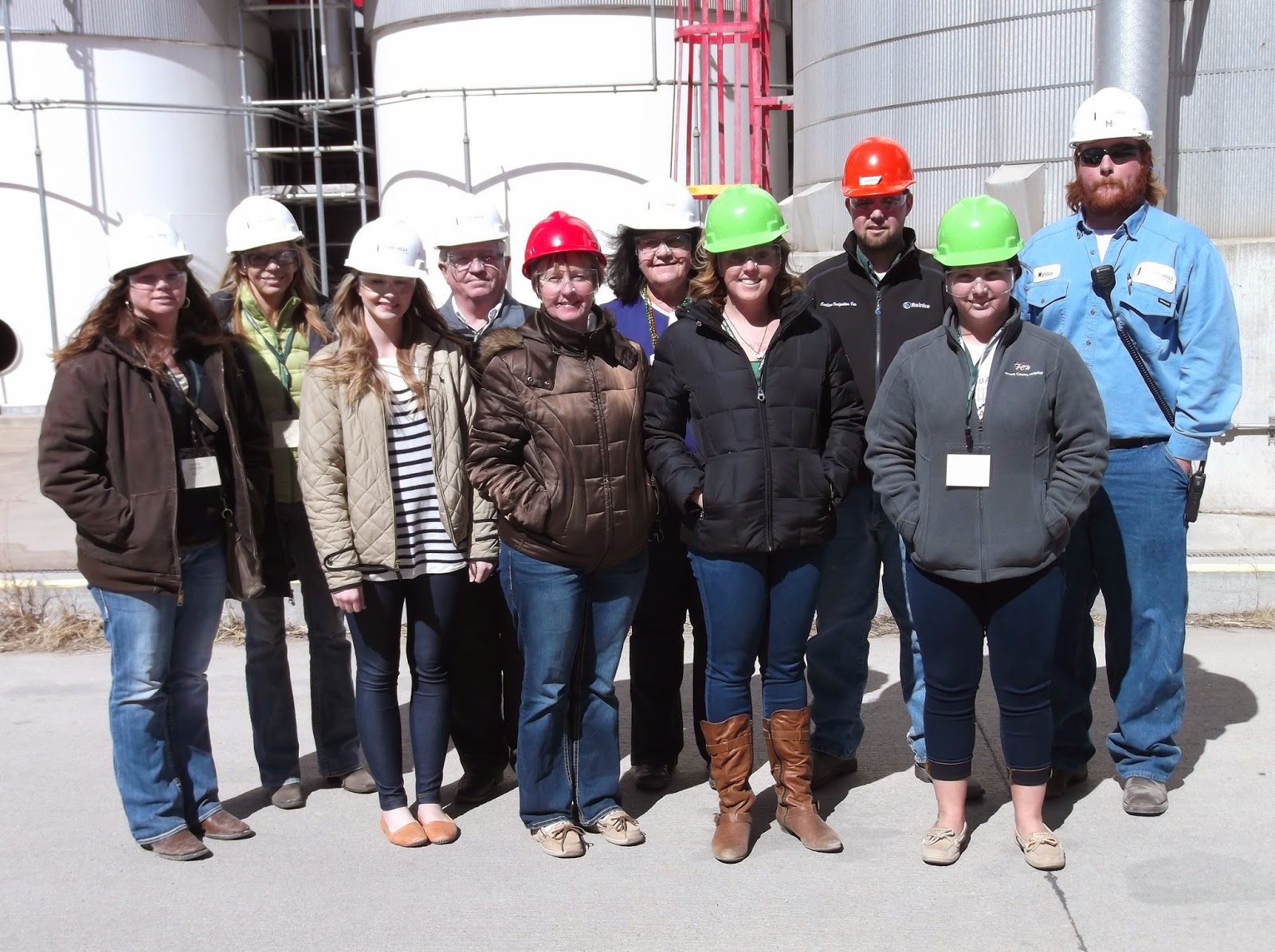 LEADERSHIP CLASS ATTENDS AGRICULTURE SESSION
FILLMORE COUNTY - The Odegeo…Leadership for Fillmore County class held their Agriculture session beginning at the Geneva Public Library March 17, 2015.  Christin Lovegrove, Heinisch & Lovegrove Law office, started the day talking about Estate Planning. She told the group one of the biggest issues is people thinking they don’t need a will because they don’t have much.

Kevin Parde and Ed Marek from Heartland Bank talked to the group on Ag lending.

The panel discussed the different cycles in lending, and how technology had changed

Leaving the Geneva Public Library the members traveled to Geneva Implement were they enjoyed muffins and drinks provided by the class members in charge. Keith Shellhouse, manager of Geneva Implement, took the class on a tour and showed the class several large implements and talked about the technology that has changed farming.
Next the class traveled to Harre Feed Yards where they met Kate Harre. Kate told the group that Bob and she had started this feed yard together 50 years ago. Twenty years ago they started commercially feeding cattle. Today they have the capacity to feed 7500 head.
The group ate lunch at Sweetwater Café in Exeter compliments of Farmers Cooperative of Exeter before they began their afternoon tours.
Allen Vavra was the speaker at Farmers Cooperative in Exeter. Farmers Cooperative, whose headquarters is in Dorchester have locations in Nebraska and Kansas and are one of the largest Cooperatives. The Exeter Farmers Cooperative takes in a large amount of white corn which is used in the food industry.
Traveling to Flint Hills Resources, a leader in refining, chemicals and biofuels, the members had Marcus Rust as their tour guide. He took the group on a tour of the ethanol plant and told about its operation.  The plant was opened in 2007 and acquired by FHR in 2012. The plant produces 120 million gallons of ethanol per year and 310,000 tons of distillers grains.
The group’s last stop was Nick’s Farm Store. Shelly & Conley Kennel, Scott Eichelberger and Nancy Eichelberger met the group in the new Golden Harvest building. After a tour of the building, Megan Jiskra a Syngenta Seed Advisor, talked to the members. The Golden Harvest building will house a seed corn business and also house the maintenance shop for Nick’s Farm Store. Nick’s Farm Store is a single dealership that has been in Geneva for 49 years and is one of Geneva’s oldest businesses.
The April session of the Odegeo. . . Leadership for Fillmore County will be about Business and Industry in Fillmore County.  Persons interested in learning more about Odegeo…Leadership for Fillmore County may contact the Fillmore County Development Corporation by calling 402-759-4910 or emailing lentfer.fcdc@genevamail.com or go to www.fillmorecountydevelopment.org.
Posted by Leesa Bartu at 7:30 AM