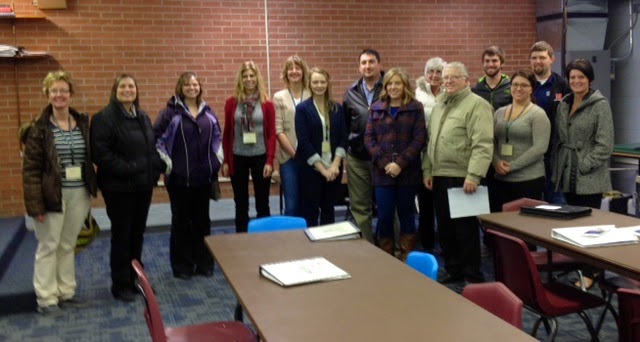 FILLMORE COUNTY - The Odegeo…Leadership for Fillmore County class attended an “ABC’s of Education” session December 16, 2014.
The day began with the members meeting at the Fillmore Central High School.
Mark Norvell, Superintendent at the Fillmore Central Schools, gave the class on overview of the Fillmore Central School Systems. Jim Rose, Fillmore Central Principal, then took the class on a tour of the High School.
The class enjoyed a morning break compliments of the Fillmore Central Schools.
Next the class traveled to the Fillmore Central Elementary School where Aaron Veleba, Principal of the Elementary School, took the class on a tour of the Elementary School and ESU6 Success rooms. Following the tour and discussions, the class traveled to Fairmont where the class toured and heard about the 5th-8th grade Fillmore Central Middle School from Principal Steve Adkisson.
After traveling to Exeter the class ate lunch compliments of the Exeter-Milligan Public Schools. Paul Sheffield, Superintendent, talked about the TYKE program that is now in the Exeter site and the technology that is available for the students. After a tour and overview of the Exeter-Milligan school, the class traveled to Milligan where Para Beth Vavra gave the class a tour of the school.
The last stop of the day was the Shickley Public School where Superintendent Bryce Jorgenson talked about the curriculum, programs, facility and the class toured their Children’s Learning Center.  The class enjoyed cookies and drinks compliments of the Shickley Public School.
The January session of the Odegeo class will focus on Health and Human Services.
Person interested in learning more about Odegeo…leadership for Fillmore County may contact the Development Corporation at 759-4910,  email lentfer.fcdc@genevamail.com or go to www.fillmorecountydevelopment.org.
Posted by Leesa Bartu at 7:30 AM